She’s still sure at the shore 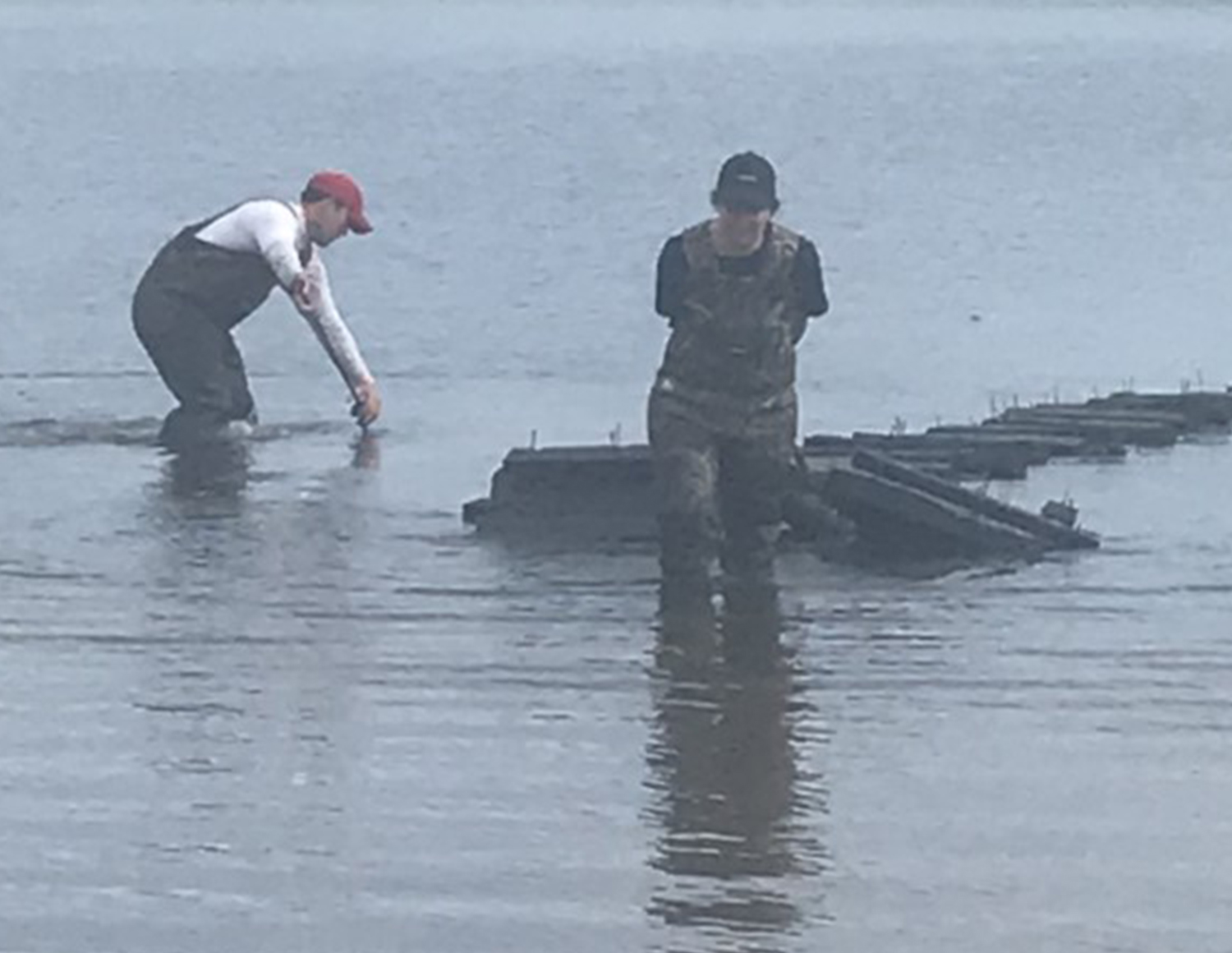 Water has meant many things for Elizabeth Ells.

Because she grew up in Barnstable, Massachusetts, on Cape Cod and surrounded by the Atlantic Ocean, water meant home. Because it became a medium for competition — she swam for four years at Norwich University, becoming team captain as a junior and senior — water also meant athletics. And because she tested it — looking for nitrogen and phosphorous and places oxygen had been sucked away — water further meant research and scholarship.

Since graduating from Norwich in 2018, Ells has continued to research and study oceans, and their most productive parts, estuaries, as a doctoral student at UMass Dartmouth’s School for Marine Science and Technology. In January, she received the Barnstable Association for Recreational Shellfishing’s scholarship, a $1,000 award, to support her thesis research analyzing estuarine and ocean data and conduct shellfish-related research. Following her life-long goals, her research aims to provide new tools for restoring damaged coastal ecosystems and their biotic resources.

“Sometimes at Norwich, we say. ‘It can’t be done, you can’t do all those things well.’ Well, I’m here to tell you that you can, and (Elizabeth is) an example of someone who’s really focused and can take on all those things.” Michael Kelley, Norwich University engineering professor

UMass-Dartmouth and the association, a nonprofit promoting the welfare, propagation, conservation and protection of shellfish habitats in Barnstable, established the fund in 2016. The award goes annually to a graduate-level student living in Massachusetts, preferably Barnstable, and carrying a 3.2 or higher grade-point average.

While at Norwich, in 2017, Ells measured Cape Cod’s water to test phosphorus levels in estuaries, particularly in “dead” or hypoxic zones, oxygen-deprived areas that can kill fish and sea animals or force them to move; the migration can hinder coastal economies like Cape Cod’s that rely heavily on fishing and tourism.

These days, Ells is examining how oysters can mitigate nitrogen derived from human activities including wastewater, fertilizers and agriculture, and which is carried to the ocean via groundwater and surface runoff. Nutrients such as nitrogen feed phytoplankton, microscopic marine algae, which bloom, die and sink to the bottom, where they decay.

Oysters offer hope. The Nature Conservancy cited research from Oyster, Virginia, showing that restoring an oyster reef could remove nearly 500 pounds of nitrogen from the water annually. At that rate, the conservancy estimated, restoring 1,300 acres of oyster reef could have the same nitrogen-reducing power as a state-of-the-art water treatment plant — for millions of dollars less.

“I love that a small chunk of the research I’m doing will go toward the reduction of nutrients in the ocean and cleaning the water,” Ells said.

Brian Howes, another of Ells’ UMass Dartmouth Department of Estuarine and Ocean Sciences professors, said Ells entered graduate studies familiar and prepared to study how to lower estuary nitrogen. Nevertheless, the professors said, Ells still had to adapt to workload and pace.

Howes said she’s succeeded. After working with doctoral students and senior lab researchers, Ells graduated from collecting data to being entrusted to use expensive, high-tech equipment like mass spectrometers.

“She’s a quick study; she understands the concepts behind what we’re trying to do,” Howes said. “Elizabeth has been here only a year and already she’s lining up support for her own thesis. She’s moving along very well. We’ll have a few students like that, but it’s not the norm.”

Ells said a career involving the ocean made sense. As a child, she said, she and her father would test water samples. As a teenager, she worked as a lifeguard, a job befitting her home community.

At Norwich, though, Ells embraced the unfamiliar and led others.

“Leadership is built in the curriculum at Norwich, and that helped drive me to excel at everything I did,” she said. “I never had been an athlete before, but I tried that. And I studied civil engineering because I always wanted a challenge.”

“It was not at all uncommon to see her working with the other students,” he said. “If you listened to the conversations, you could tell that the students were asking her the questions and not the other way around.

“Some students, if they were asked a lot of questions, might get up and leave,” he added. “But she stayed.”

Schmeckpeper also recalled Ells thriving in his class on wood, steel, and concrete structures, a topic far from oceanography.

“So here she’s working in something that’s not in her comfort end, an area she’s not familiar with. It’s not oceanography,” Schmeckpeper said. “And she’s really focused. She said, ‘I’m going to do this and I’m going to do this well.’ And she gets the highest grade of anybody.”

“She’s the all-around student personified,” he said. “Sometimes at Norwich, we say. ‘It can’t be done, you can’t do all those things well.’ Well, I’m here to tell you that you can, and she’s an example of someone who’s really focused and can take on all those things.”

“If you’re going to have success in this line of work, you have to have the work be motivation to come in even after a 14- 16- 18-hour day. That’s what is impressive about Elizabeth.” Miles Sundermeyer, UMass Dartmouth professor

Sundermeyer said if Ells hasn’t figured out a challenge, she’ll work toward mastery, asking questions and staying enthusiastic even as workloads and pressure mount

Sundermeyer said Ells has bonded into her group of seven researchers; they collaborate well and socialize in and out of the lab.

“Sometimes her work requires her to be in the lab until 4 in the morning, with everyone else on the research team,” Sundermeyer said. “And the next day, when she has to be back in at 9 (a.m.), she’ll say, ‘Yeah, I was up pretty late last night. But it’s time to go again.’

“If you’re going to have success in this line of work, you have to have the work be motivation to come in even after a 14- 16- 18-hour day,” he added. “That’s what is impressive about Elizabeth.”

Ells said she planned to come back to campus for Homecoming and bring her alumnus father to visit her sister Caroline, a Norwich nursing major.

Howes said he hopes more talent may be on campus, in the Homecoming crowd or elsewhere.

“If you have any more Elizabeths at Norwich,” he said, “please send them along.”