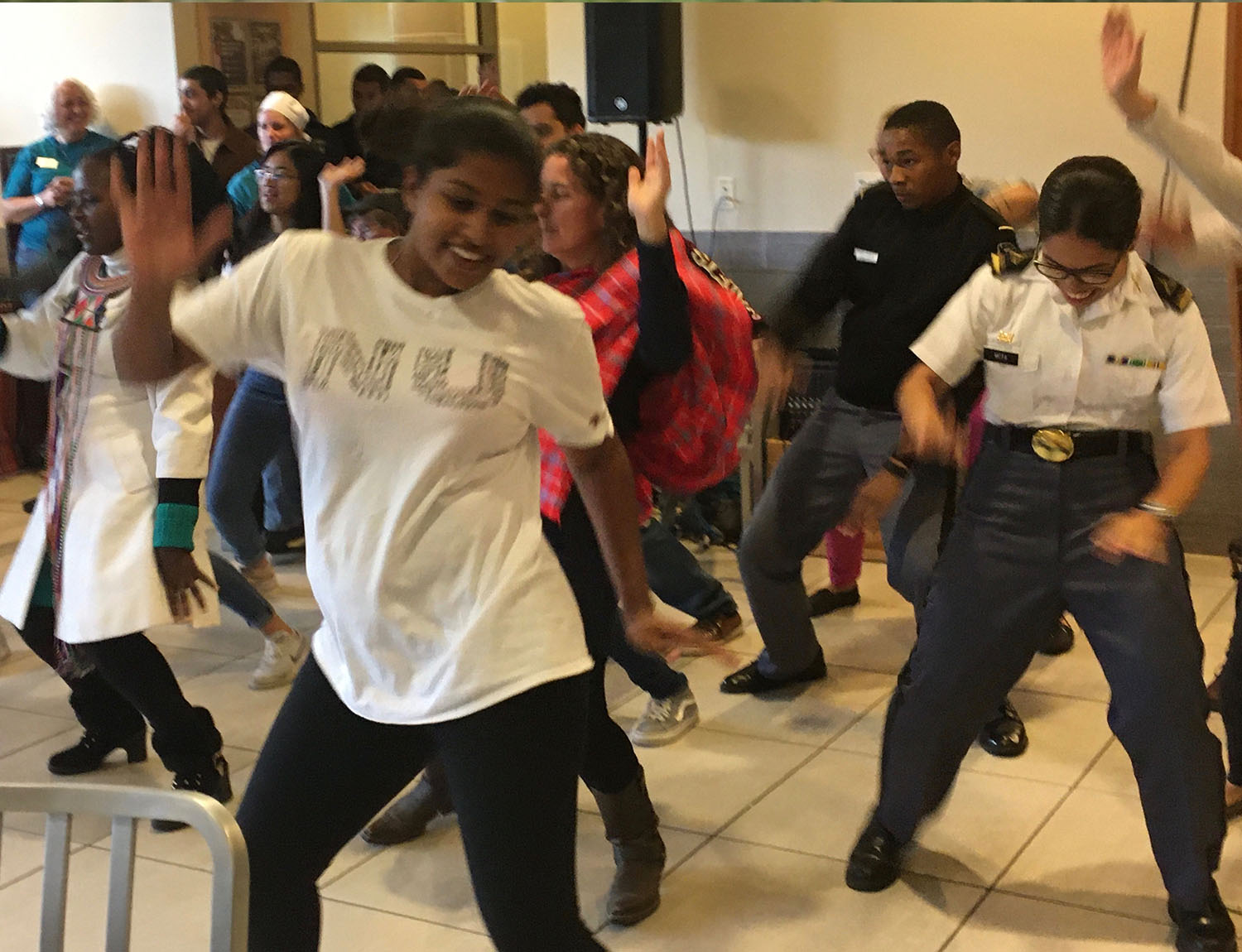 In a radius of a few Wise Campus Center feet Oct. 4, visitors could visit a smattering of nations, eat their food and sample their culture, no passport or plane tickets required. Norwich University’s Office of Diversity Equity and Inclusion had joined the Campus Activities Board, the International Center and Sodexo in presenting a Celebration of Nations.

The “fishbowl” outside the dining hall had become an outpost of Saudi Arabia, which has a large student contingent on campus. Abdullah Alshahrani, a first-year Norwich student from Abha, Saudi Arabia, stood dressed in a thobe, an ankle-length, long-sleeved, gownlike garment and welcomed people in.

“Yeah, we can all talk about (internationalization) and believe in it, but where do you see it? You see it at events like this.” John Puleio, coordinator of multilingual student services, Norwich University

Alshahrani said he’d been in the United States for about three years, spending a stint at the Valley Forge Military Academy near Philadelphia, and in Vermont and at Norwich for about eight months. He said he loved the university and its people and admired that state’s trees and beauty but disliked the winters.

“It’s too much cold here,” he said. “In Saudi Arabia, it’s pretty much impossible to get below zero.”

Alshahrani, who is studying cybersecurity, said the celebration would help dash false notions about Saudi Arabians and their culture. By asking questions and getting answers, students can better understand one another and forge friendships.

Also, outside the dining hall stood tables laden with handmade items from Nigeria and Nepal (soaps, bags, figurines) and art (stone sculptures) from Ian Knife, a New York City resident and onetime Zimbabwean refugee who was visiting campus. The Norwich Heritage Family Tree, a drawing of a brown tree trunk and branches, occupied a whole table. Students could write their names, majors, and ethnic backgrounds on a green leaf shape and paste it on. With many student additions, the tree had enough leaves to be in full summer bloom.

“I’ve been here for seven years, and when I got here, I heard one of the I’s in Norwich’s mission was internationalization,” said John Puleio, a Norwich faculty mentor who had added his leaf to the tree (Sicilian, Irish, English, Scottish) and wore a vest made in Guatemala. “Yeah, we can all talk about it and believe in it, but where do you see it? You see it at events like this.”

In the dining hall, special serving stations offered food (and music and decorations) from Kenya, Canada, the Dominican Republic, Saudi Arabia and China. Students, faculty and staff could come and partake, for free.

Civilian and Corps students, faculty and staff were digging into their meals at around 12:15 p.m., when music began bubbling from an amplifier. Robin Combs, a local Zumba instructor, found an empty spot on the floor, waving her arms side to side and rocking back and forth from her waist, legs shoulder-width apart. Norwich’s contingent — including international students in garb from their nations — soon joined in, matching her moves. They came individually at first, then in a wave.

In seconds, about 35 dancers had formed a flash mob, swaying, stepping, waving — and smiling. The song was Zack Knight and Jasmin Walia’s “Bom Diggy”; the dance was a bhangra, a traditional dance from the Punjab region of India and Pakistan performed to rejoice in the harvest season.

Matthew Roche, Norwich’s director of Diversity, Equity, and Inclusion, said nations at the Wise Campus Center event represented programs in which Norwich was involved. Intercultural events earlier in the week, including sushi rolling and a German Unity Day fete, set the stage of the Celebration of Nations.

“We wanted something to raise more awareness around interculturalism and internationalism on campus,” Roche said, “and that we are inclusive and welcoming of all cultures and backgrounds.”

And stories. Knife said he was delivering truth, undistorted by social media or anything else, of his seeking asylum in the United States as a political refugee. He said sharing truth about cultures also mattered.

“For most who are not able to travel, this brings the whole world right into your backyard,” he said. “So, right now, we’ve got flavors from all over the world, we’ve got crafts, we’ve got people who can share an experience. So this is like traveling without moving.”

Abigael Munyao, a first-year Norwich student from Kenya, major undeclared, had been in the United States for just a month. She said her Norwich University experience so far had been wonderful.

“This event is making me feel at home, we don’t feel we are far from home,” she said as she enjoyed a plate of Kenyan ugali, a cornmeal porridge and nyama choma, roasted meat. “When we have multiculture, we appreciate what others are doing and it’s like we accommodate everyone in the world.

“I’m so excited; it’s my first time to have this event,” she added. “I have with me all the people from my class, we are seated on the same table and we’re enjoying the meal together. I like socializing with them.”

Oh, and she liked the dancing.

ICYMI: Students, faculty and staff got up and danced at the Celebration of Nations on Oct. 4 at Wise Campus Center. https://t.co/YMbF6rGhmo #inclusion #multiculturalism