Change for the worse, planning for the better 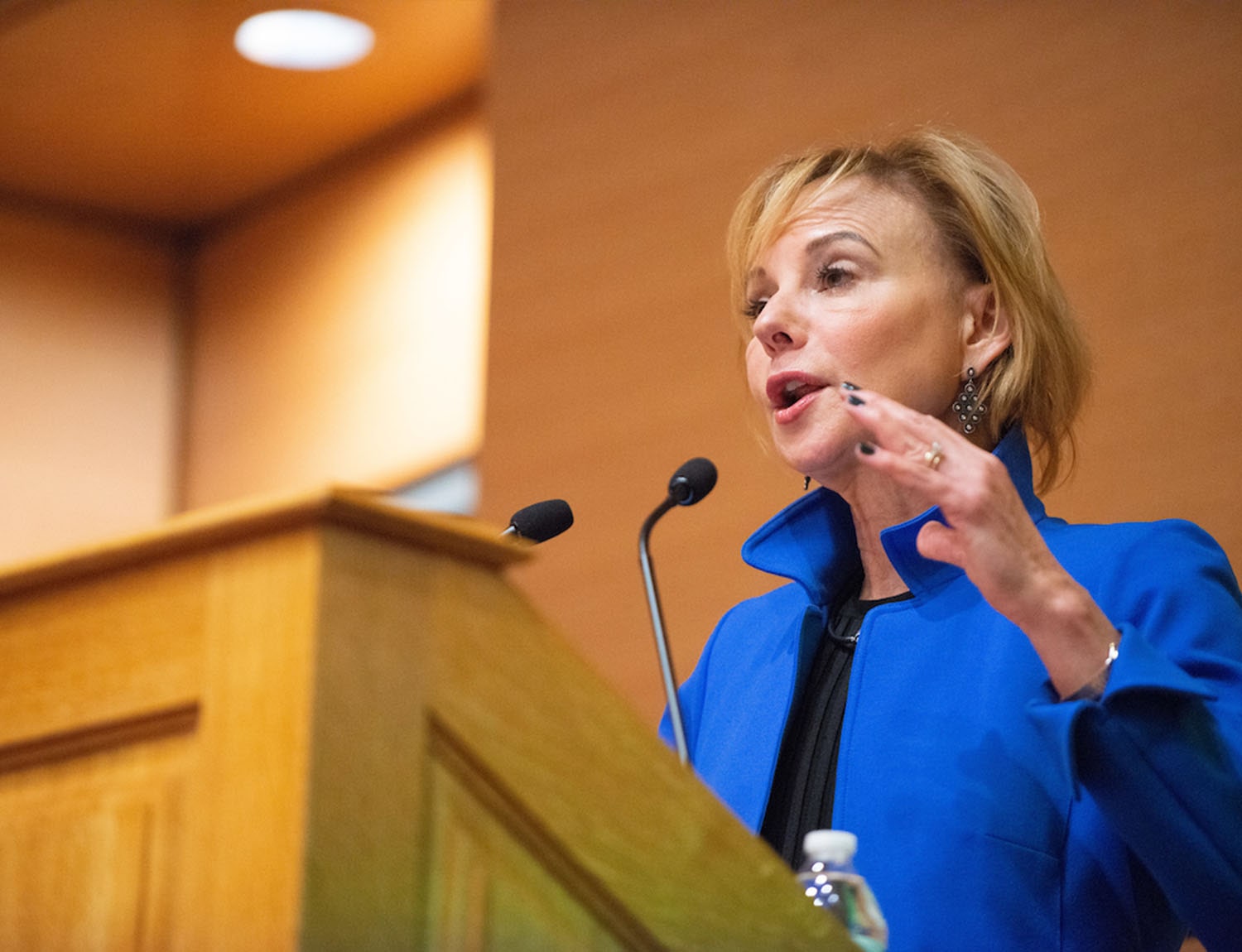 Some military threats can’t be anticipated, Sherri Goodman said, think the Pearl Harbor bombing of December 1941 or the terrorist attacks of September 2001. But climate change, which is making the world hotter, intensifying storms and altering geopolitical strategies, is a military threat multiplier that packs no surprise.

We ignore it at our peril, she said.

Goodman, a former deputy defense undersecretary and a senior fellow at the Wilson Center’s Environmental Change and Security Program and Polar Institute, spoke on “Climate and Security in an Era of Great Power Competition and Global Disruption,” Oct. 11 at Mack Hall Auditorium.

The Center for Global Resilience and Security and the Peace and War Center sponsored the event.

“(Gen. Gordon Sullivan) said, … ‘If you wait for 100 percent certainty, you know something bad is going to happen on the battlefield,’” We’ve used that a lot in framing the issue that it’s time to act.”
Sherri Goodman, Wilson Center senior fellow

In her hourlong talk, Goodman, who founded, led or advised nearly a dozen research organizations on environmental and energy matters, national security and public policy, outlined climate change and the “environmental era.” This era, she said, began in the 1960s with the birth of the National Environmental Policy Act and Environmental Protection Agency (both 1970) and has been marked by international arrangements — the forming of the Intergovernmental Panel on Climate Change (1988), the Montreal Protocol to protect the ozone layer (1989), the Rio Earth Summit (1992), the Paris Agreement (2016) and this year’s United Nations Climate Summit.

Goodman said she and Gen. Gordon Sullivan, a 1959 Norwich University graduate and longtime former chairman of the board of trustees with whom she’d worked when he was U.S. Army chief of staff, joined about a dozen senior retired military personnel about a dozen years ago to deeply scrutinize climate change’s national security implications. Although some observers suggested waiting for more evidence or certainty about climate change’s threat, or existence, Sullivan urged action.

“He said, ‘No. If you wait for 100 percent certainty, you know something bad is going to happen on the battlefield,’” Goodman said. “We’ve used that a lot in framing the issue that it’s time to act.”

Goodman said the Arctic changes worry her particularly; she’s imagined a nightmare scenario in which a Russian nuclear icebreaker ship collides with a Chinese liquefied natural gas-carrying vessel in the Bering Strait.

“What keeps me up at night, is that I’m not confident in Russia managing its nuclear capabilities,” Goodman said. “And they are increasing their number of nuclear icebreakers and nuclear-capable vessels.”

The council, according to its website, will comprise senior military leaders from around the globe and meet regularly to produce an annual World Climate and Security Report and drive policy to address the security implications of a changing climate. Goodman said Norwich University might someday partner on the new council’s initiatives.

“You bring the kind of expertise and thinking about climate security and national security context that is so important,” she said.

Also, she said, the U.S. armed forces, considered environmental laggards in the 1980s and 1990s, have become clean-energy leaders. Innovations such as wind-powered Saildrones, she said, offer particular promise as ecofriendly ocean current data collectors in the Arctic, Antarctic and other remote regions.

Next-generation leaders, including some who might be enrolled at Norwich University now, might someday use artificial intelligence and quantum computing to better climate-change preparedness, Goodman suggested.

“The urgency of the climate threat is such that we should not let ourselves be surprised,” she said. “There is time to mobilize and act, but not that much time.”