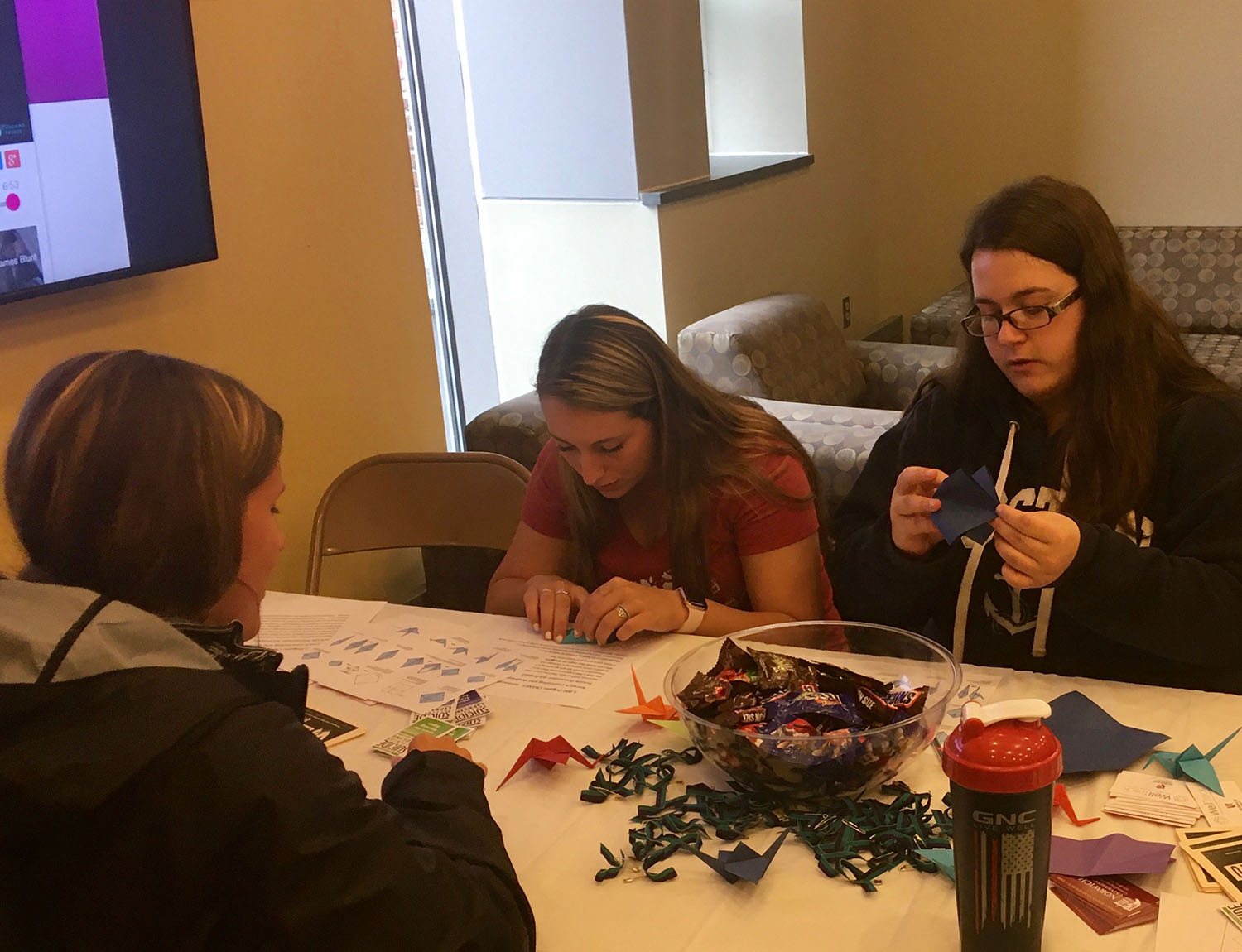 Write a wish, fold some paper and maybe save a life.

Around lunchtime Monday, students packed the “fishbowl” outside the Wise Campus Center dining hall and followed instructions, video and written, for making origami paper cranes. The Counseling and Wellness Center set up the station, stocking it with papers in a rainbow of blues, oranges, yellows and reds, and offered bowls full of candy and greetings from Wilma, an English mastiff therapy dog, to invite people in.

The Counseling and Wellness Center aimed to amass a senbazuru, or 1,000 cranes (“sen” is Japanese for 1,000). Like dragons and tortoises, cranes, which symbolize love, healing and happiness, have special prominence in Japanese legend. One thousand is the number of years cranes are thought to live, according to Japanese folklore and to be the magic number of paper cranes for a special wish — injury recovery, lifelong good luck — to come true.

“A lot of people feel like they’re alone … people struggle with stuff and you don’t even notice they are struggling with stuff” Meredith Long, Norwich sophomore major

The origami folding promotes the Counseling and Wellness Center’s goal of zero suicides. The federal Centers for Disease Control and Prevention estimate more than 47,000 people died by suicide in the United States in 2017.

The story of Sadako Sasaki, a 2-year-old Japanese girl who suffered radiation poisoning during the U.S.’ World War II atomic bombing of Hiroshima in August 1945, helped globalize paper crane senbazuru making. Sadako’s family and classmates made cranes hoping to keep leukemia from killing her. (Sadako died at age 12 in 1955).

Paper crane folding has continued as a goodwill gesture. Ridgewood, New Jersey, schoolchildren folded a senbazuru in 2011, wishing for a speedy recovery for earthquake and tsunami victims in Japan. In May 2016, U.S. President Barack Obama brought cranes to Hiroshima and Nagasaki when he attended the Group of Seven industrialized summit in Japan. His cranes were donated to the Hiroshima Peace Memorial Museum and lent to the Nagasaki Atomic Bomb Museum.

Norwich’s crane folding continued all week at Wise Campus Center (including Thursday, National Mental Health Day), Mack Hall (one night accompanied by a screening of the movie “Ripple Effect” with Kevin Hines) and at Kreitzberg Library. In will continue through Oct. 31 at stations at the Counseling and Wellness Center and Kreitzberg Library.

On Monday, Meredith Long, a Norwich sophomore studying nursing, said although precise folding was challenging — some creases took at least three tries — the effort was worthwhile.

“This is important," she said, "because it will show people who might be feeling suicidal that so many people were willing to come together to make the cranes to represent that everyone cares.”

Meredith Osburn, a fellow sophomore nursing student, said she joined Monday’s folding (her crane was lilac-colored) partly because she likes the Counseling Center’s activities and partly to show her peers there was a place to get the help they need.

“A lot of people feel like they’re alone,” said Osburn, who said she knew someone who committed suicide when both were in high school in New Hampshire. “And raising awareness for suicide raises awareness for people who don’t feel like they can talk to anyone about it, so I think it will also get the stigma around it gone.

“It makes me sad, because the person was a great person,” she said, remembering her friend’s suicide, “and it’s just hard because people struggle with stuff and you don’t even notice they are struggling with stuff.”

“It also gives people an appreciation for another culture,” Johnson said. “They get a sense of hope and optimism and get to be a part of a larger effort.”

Krista Day, Counseling and Wellness Center’s administrative assistant, said she and her colleagues will collect the finished cranes and display them somewhere in the campus center; later, they’ll be moved to a display case outside the counseling center in Kreitzberg Library.

Day said she and her colleagues aimed to show Norwich’s students that seeking help reflects strength — leaders who learn to manage their mental health are better leaders.

“The overarching message is to be there for one another,” she said. “Don’t ever hesitate to ask the questions. If you see somebody in distress, even if they’re just sitting there quietly and look lost ask how they’re day is. … Just saying hi or offering a quick smile could do a lot for that person.”