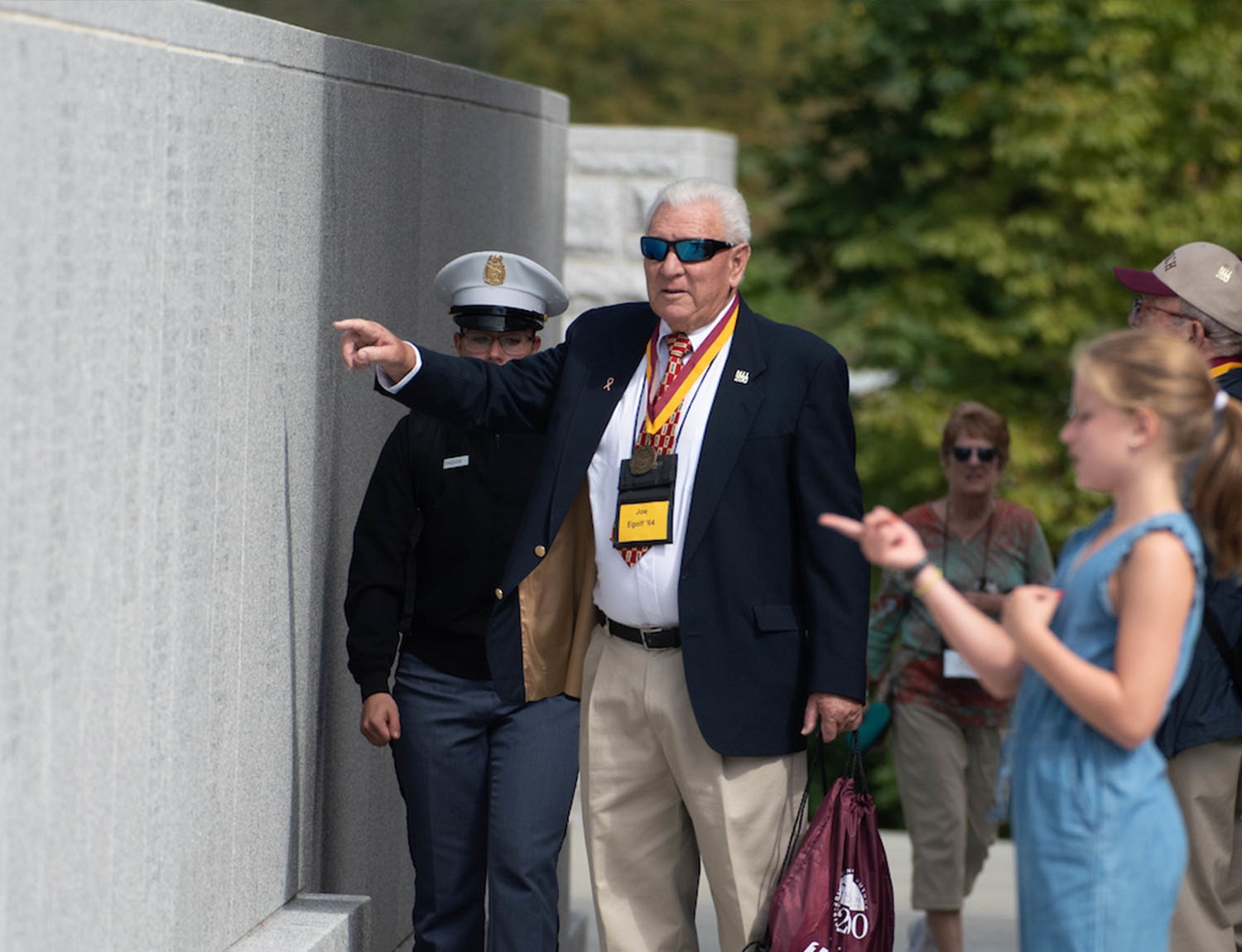 Patrick Harmon remembers spending seven long-ago summers with his grandparents, Maj. Gen. Ernest Harmon, and his wife, Leona, on Lake Champlain. The stints were formative, he said, serving as a finishing school for inattentive boys

Patrick Harmon, a 1971 Norwich graduate, recalled regular chores and projects such as outdoor barbecue building as in-visit skill sharpeners. Attention to detail was paramount in these tasks, Patrick said, because the general did everything as if to honor someone special.

“The wall has served as a touchstone for students and family members for almost 35 years,” Norwich President Richard W. Schneider said at the wall’s rededication, adding that four of the general’s descendants were present — William and Barbara Jo Roll, Bob Harmon and Patrick Harmon. “It’s a place to pause, remember and reflect on the memories of the loved ones whose names are inscribed behind me.

As Norwich’s historical archives recount, Ernest Harmon attended Norwich for a year and eventually graduated from West Point in 1917. He served in both world wars  and commanded the U.S. Constabulary, which worked to restore law and order to post-World War II Germany. He later spent 15 years as Norwich’s president, overseeing unprecedented growth in the university’s student count and campus and ushering Norwich into the modern age.

“Major General Ernest Harmon always said that his sense of purpose and destiny began right here, in September of 1912, 107 years ago,” Patrick Harmon said at the wall rededication. “His deeds and contributions can be seen and felt here today, as part of our history, traditions, and stories. But you may not know how this place became an essential part of his soul, which he gave back to Norwich for the rest of his long and adventurous life.”

Patrick recalled his grandfather’s humble roots — he was orphaned at age 10 and taken in and raised by a childless farmer and his wife in Newbury, Vermont. At age 14, Ernest Harmon moved to Bradford Academy, working as a full-time caretaker in exchange for board and education beyond the eighth grade.

When Harmon first came to Norwich, after leading a cavalry company in World War I, he served as the university’s commandant and military science professor. It was the 1920s and the world was changing, adding new transportation modes and communications channels, not unlike today.

Many of the names now on the Harmon Wall here were cadets then, under the general’s tutelage, Patrick Harmon said; their leadership in World War II and the subsequent industrial boom profoundly contributed to Norwich, the United States, and the world.

The general’s reshaping of Norwich would continue.

“The General’s World War II accomplishments and his 15 years as president of Norwich are well known to us,” Patrick Harmon said. “Suffice it to say that this special institution and its cadets and alumni were as much a part of General Harmon as he is a part of Norwich.

“This is also true of Mrs. Leona Harmon, his wife, whose wisdom and patience subtlely, yet profoundly influenced everything I have shared with you today.”

In a later interview, Patrick Harmon said he first saw Norwich with his grandparents, and though the visits were brief, he looked at the hills and the buildings and sensed specialness. Now, five decades after his own graduation, he said, many mysteries have revealed themselves.

“The commitment to the people, to the values, to the honor of everything you do,” he said, describing what had become clear. “Because no matter what it is, you do it to honor the people here and the traditions and everything Norwich stands for.”

The Rev. William Wick, in a ceremony-closing prayer, said he hoped the wall and its names will inspire all who pass by.

“This is the place that represents the best of what we have been what we are and shall be,” Wick said.