This monument is to scale 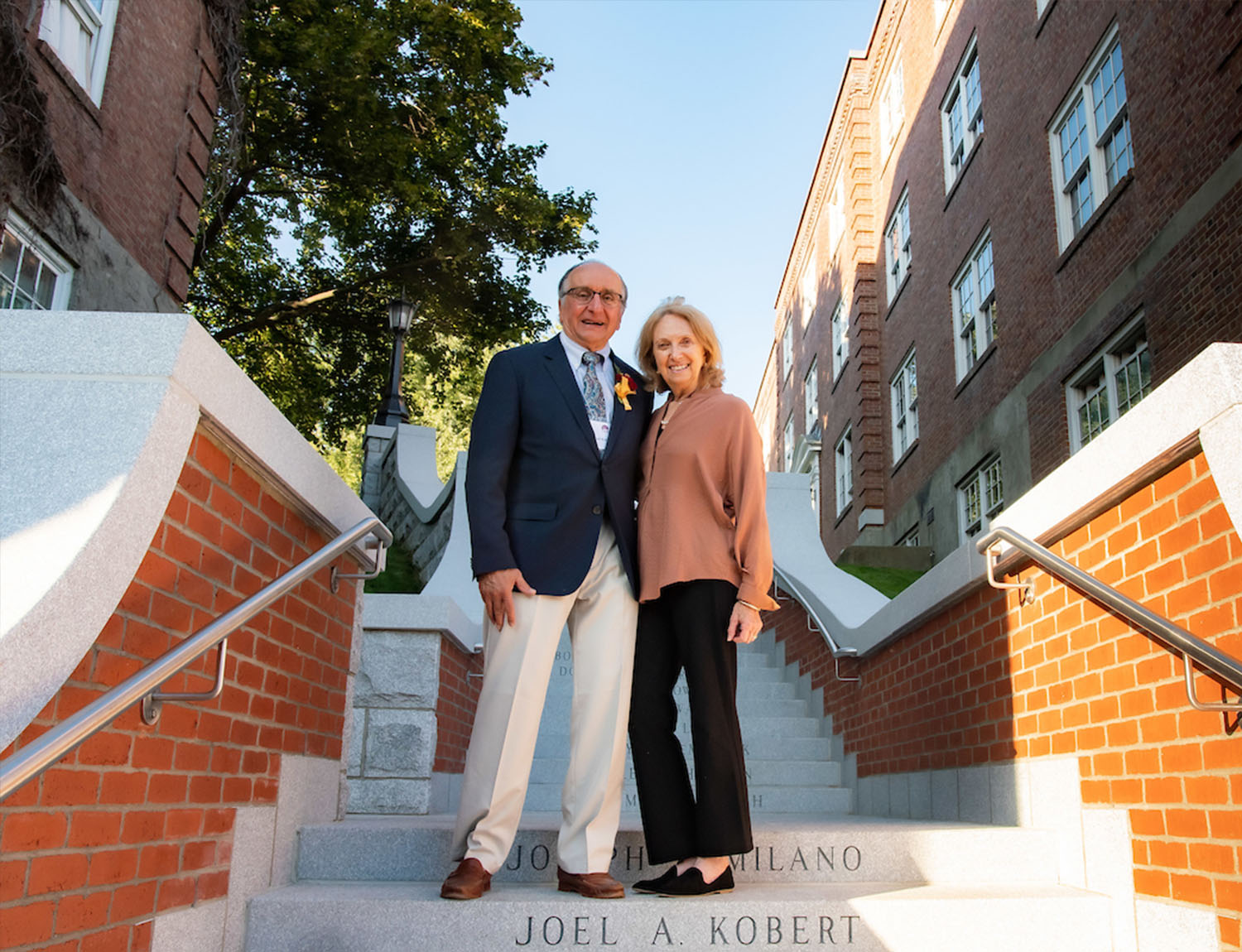 The letters came in the mail, surprising some recipients, moving and humbling others. The missives told the 78 recipients, or in some cases, their families, that they’d be forever remembered on Norwich’s campus, with their name on the Bicentennial Stairs.

The stairs, between the Upper Parade Ground’s southeast corner and the Sullivan Museum and History Center, were built with money from the five-year Forging the Future Campaign. The campaign, set to end Dec. 31, had raised more than $118 million by Sept. 30, exceeding its original $100 million goal. It has funded building construction and renovation, strengthened academic programming and expanded scholarship endowments.

The Bicentennial Stairs, built from granite, include names of Norwich’s leaders, distinguished alumni and others from military and civilian careers and people who represent university “firsts.” Honorees included William Mayo, a Northfield, Vermont, physician who created a scholarship that helped boost Norwich’s post-Civil War enrollment; Charles Dole, Class of 1869, who served as an acting president and trustee; and Paul Carrara, Class of 1959, a trustee and former president of J.P. Carrara & Sons, a family-owned Vermont producer of stone aggregates and ready-mix concrete.

“Like the Vermont granite that bears their names, these honorees are part of the bedrock upon which the future of our university now stands.” Doug McCracken ’70, chairman, Norwich Bicentennial Commemoration Committee

The new staircase, for which ground was broken in May 2018, is a companion to the  Centennial Stairs, built in 1919 at the Upper Parade Ground’s northeast corner to mark the university’s first century.

“Like the Vermont granite that bears their names, these honorees are part of the bedrock upon which the future of our university now stands,” McCracken said. “May generations of Norwich students ascending this two-tiered staircase be lifted up by their legacy and let their good works and achievements be an inspiration to us all both now and in perpetuity.”

“At Norwich, values have always mattered. They did at our founding, at our centennial and today more than ever … Norwich values remain eternal,” Popowski said. “The men and women, whom you are about to meet collectively, represent the Norwich story better than any speech, video or book. They are intrinsically Norwich forever.”

The stories behind the leaders

Cadet Col. Ethan Hagstrom, Class of 2020, followed the footsteps of his grandfather, James Bingham, who served as cadet colonel during the 1959-60 academic year. Understanding the university’s history was as important as ever, Hagstrom said; as a rook, knowing the Centennial Stairs’ names and their ancillary stories instilled pride in what had been built before.

The new stairs can impart similar lessons, he said.

“Now there are new names,” he said, “and I think it’s just as important that we build an awareness of those leaders and their stories. The beauty of it is a lot of them are here today and we can talk to them and learn their stories.”

“These Norwich men and women that are today immortalized in the granite are what the young men and women currently here on campus should be aspiring toward in the future. The bar has definitely been set, and every day we encourage those around us and ourselves to meet it.”

Craig Koziol, a retired U.S. Air Force lieutenant general and 1976 Norwich graduate, said he was surprised and humbled to be honored with a Bicentennial Stair.

“It’s a fantastic honor,” said Koziol, who spent 36 years in the Air Force and received the Defense Distinguished Service Medal and many other high awards, including the Zuckert Management Award and the Knowlton Award. “Norwich has really been the foundation I believe for the success I had in the military. … Coming to Norwich taught me about integrity, honesty, teamwork, loyalty and helping people out to be successful. … I’m very proud to have been able to attend this great university.”

Kevin D. Crowley, Norwich Class of 1970, served with the U.S. Army airborne at Fort Bragg, North Carolina, before returning to Northfield to practice medicine and serve his university. He has advised and mentored dozens of NU students interested in medicine.

“When I got the letter, I cried,” he said. “It’s just a humbling experience and I don’t know as I’ll ever fully believe I belong on there.”

Kimberly Baumann, a 1987 Norwich graduate and the first female Norwich Corps of Cadets member to be promoted to general officer and a current assistant adjutant general for the Rhode Island National Guard, said she was surprised and pleased to be honored.

“I don’t think any of us expect it — there was a whole committee there and 100 years to choose from,” said Baumann, who is married to one Norwich grad and the mother of another. “Everybody who’s on the stairs, the ones who are still on Earth, I think our goal is to keep giving back to the university that gave so much to us.”