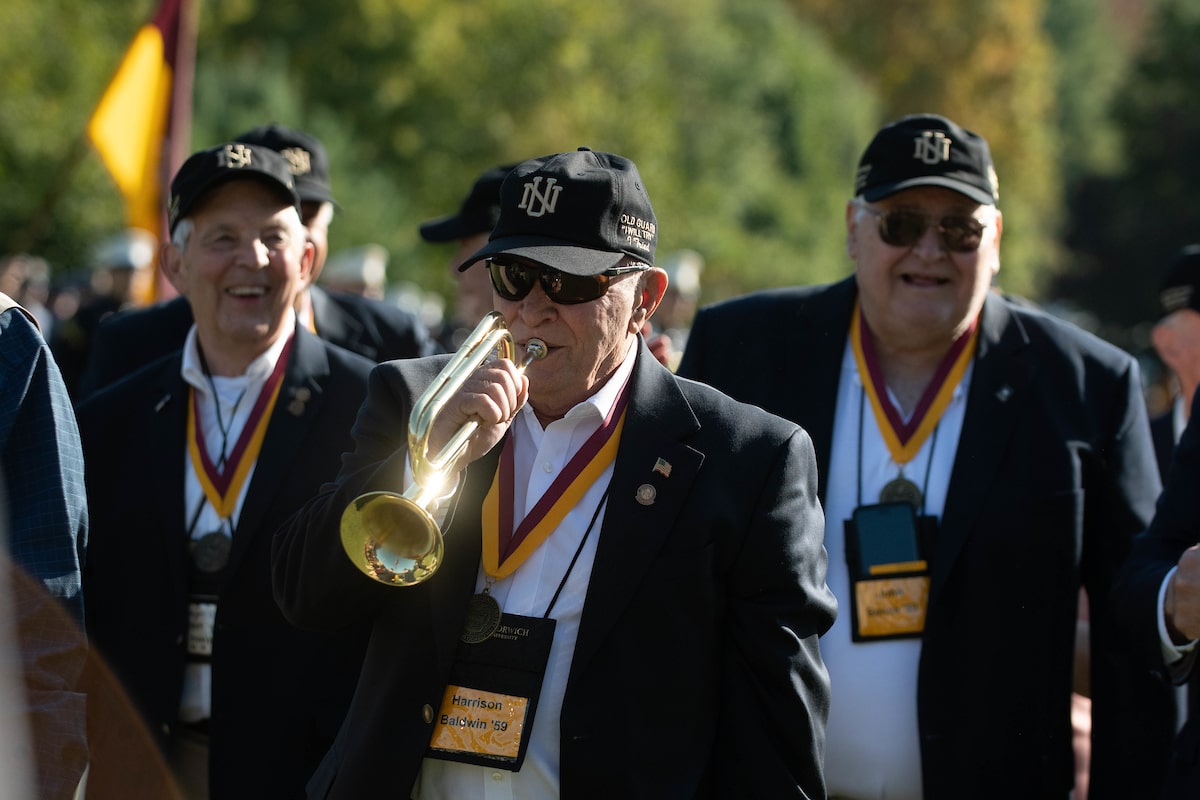 Harrison Baldwin was rehearsing his bugle call, playing the opening notes to “Charge” again and again. Sometimes the notes rang true; sometimes they came out flat. But his enthusiasm never flagged.

Baldwin and classmates from the Magnificent Class of 1959 were gathered in a parking lot behind Plumley Armory, preparing for the bicentennial Homecoming Weekend Alumni Parade. Packs of other alums were lined up for yards in similar huddles. Backslaps and how’ve you beens broke through the bugle bleats.

Before long, everyone would head up the road and through Sabine Field at Haynes Family Stadium’s gates. An audience in folding chairs in front of the grandstand and the Regimental Band drummers waited to welcome what President Richard W. Schneider called the largest gathering of alumni in the university’s history.

Baldwin explained that he was his group’s designated musician, appointed by “bigwigs in the class.” He said was playing to remember Pierson Mapes, a former classmate who’d spent four years in the U.S. Army after graduation and later served as vice president of network planning at NBC. Mapes was at the network  from 1978 to 1994, leading a golden, ratings-dominating period.

Baldwin’s classmate Joe Jordan joked that being back on campus made him feel old, but glad.

“I never would have guessed I’d make it to my 60th (reunion), but I did,” he said. “It’s great to be back. I’m seeing people I haven’t seen since five, 10 years ago; I only get up this way (from Mechanicsville, Pennsylvania) every five or 10 years for the reunion.

“In the early days, I didn’t get to a lot of (reunions) because I was in the Army and I was on the wrong side of the world half the time.”

“It’s going kind of rough,” Baldwin said of his preparade music, adding that he’d played the tuba and euphonium and was in the Regimental Band years ago as a Norwich cadet but hadn’t really tried the bugle.

“Let me get through the parade,” he said with a laugh, “and then I’ll let you know if I feel bad or good about playing.”

The ’59ers had plenty to celebrate. A 60th reunion. Thirty-eight 38 of 95 class members in the Partridge Society, a group encouraging alumni, parents and others who help the university achieve its financial goals. A Sustained Service Award for Richard Thayer for faithful, honorable service to the university. And Saturday’s donation check, $2,281,637.66, raised from Jan. 1, 2015, to Sept. 24, 2019.

“You couldn’t ask for a better bunch of guys.”Bill Black, Norwich Class of 1959

Baldwin, like Jordan, said he was happy to see classmates.

“Some of these guys I have seen for ages,” said Baldwin, who lives in Keene, New Hampshire. “And some of them haven’t been back for 50 or 60 years. So, there they are.”

Bill Black said he’s one of four ’59ers who make it back to Norwich every year for reunions. (He comes from his home in Cape Cod in Massachusetts). He called the camaraderie wonderful and the bond strong.

“You couldn’t ask for a better bunch of guys,” said Black adding that his class had had a 90 plus percent participation rate for the milestone reunions — 50th, 55th, 60th — raising, according to alumni office records, $17.8 million to donate during those tentpole events. “We all care for each other and we care for Norwich.”

With parade time close, the group began walking. Gordon Fawcett took one end of the yellow “Magnificent Class of ’59” banner; David Bockoven took the other. Henry Pierpan stood near the front of the line.

The class had endured a lot together; some 150 people had graduated together and commissioned into the Army together, commissioned on a Saturday, graduated on a Sunday, he said, into the Army on a Monday. Some classmates, Gordon Sullivan most notably, became generals. Sullivan would serve as chief of staff of the Army and a member of the Joint Chiefs of Staff.

“We went through so much here at Norwich for four years, and that wasn’t the easiest thing to get acclimated to,” said Pierpan, who now lives in Williamstown, Massachusetts, and spent 20 years in the Army. “Then we started crossing one another’s paths in the service and had a great deal of respect for one another.”

It was time to move. Slowly the ’59ers walked down the path, in the stadium, onto the turf. When they arrived, Baldwin kept playing.

When he stepped to midfield, he blasted one last “Charge.”