Ring of the Hill 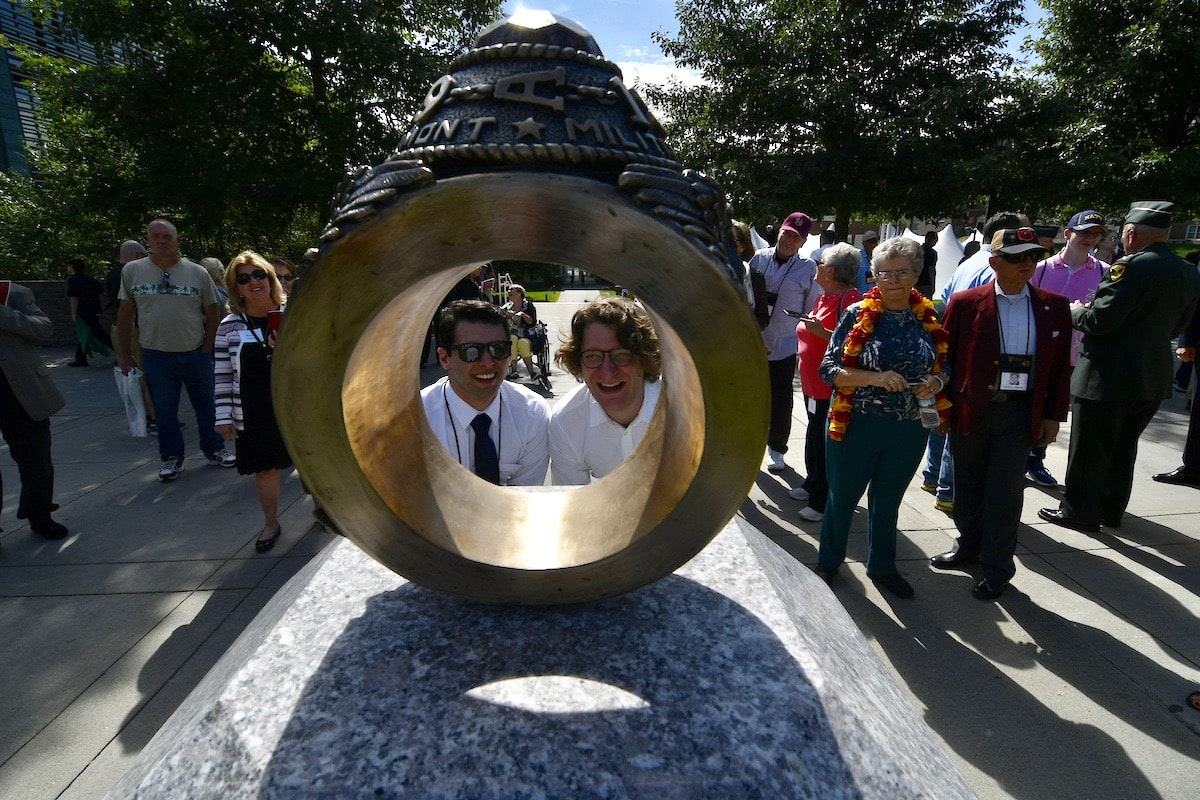 How many doughnuts does it take to build a monument? About 50 dozen Krispy Kremes, it seems, imported from Montreal. Sales of the pastries, and well-placed hammer swings, let the Class of 2019 raise the cash to give “Norwich Forever” new form — a bronze of the university’s traditional keepsake.

Melikian and a committee including Kaylynn Butchko, T.J. Carley, Megan Heney, Audrey Meakin, Benjamin Pulminskas, Amber Reichart and Mike Smith, raised $6,131 for the project. The Class of 2019’s Guardian Class, the Class of 1969, chipped in $4,000.

“The quote we have on there, ‘We preserve in bronze that which binds us,’ is not only a reminder that time can pass, but Norwich’s legacy will always stand.” Patrice Melikian, Norwich Class of 2019

“Since 1923, students who graduate wear their rings with pride, whether civilian or Corps,” the 22-year-old Melikian said at the unveiling. “Hopefully, all future students will come and … tap this monument as a significant connection to all past students and alumni who came before them.

“The quote we have on there, ‘We preserve in bronze that which binds us,’ is not only a reminder that time can pass, but Norwich’s legacy will always stand.”

John Hall ’69 wasn’t at Homecoming or the unveiling but heard good things about the new monument.

“In my opinion, the ring statue was a great concept,” Hall said by email. “And the sculptor did a wonderful job of creating a replica that will continue to remind students and alumni of one of the most recognized traditions of Norwich. Many of my classmates who attended our 50th reunion commented on how striking the statue was.”

Williams, who graduated from the Pennsylvania Academy of the Fine Arts and works at Barre Sculpture Studios, came to the project on the recommendation of Angelo Arnold, a professional artist and Norwich specialist Architecture and Art instructor. Williams said he and Arnold are both connected to the Vermont Studio Center.

The finished ring weighs about 40 pounds and has a cylinder measuring about 1 foot in diameter and 14 inches top to bottom. At their widest point, the ring’s edges measure about 10 inches to accommodate sculpted eagles. The Deer Isle granite pedestal supporting the ring stands 4 feet high by 2 two feet wide and 2 feet deep and weighs about 2,700 pounds.

Williams, a Montpelier resident, began his design with 3D drawings. Although the pictures were meant to guide an engraving, Williams, seeking a lifelike feel, made a relief sculpture. He started with a clay model, refined it for about three months, then cast it in bronze. To represent a unified campus, one side of the bronze represents the Corps’ ring design, the other the civilians’ ring design.

He spent a month “chasing the bronze,” using sandpaper, carbide burrs or rotary tools to smooth imperfections, and a week adding a patina for the finished look. Williams said he usually works on much larger projects in stone (usually 6 to 10 feet tall), so the ring let him work smaller-scale in a different medium.

“I didn’t fully understand the background and the concept of this project,” Williams said at the unveiling, “and to see that what I’ve done fits into something greater is really fulfilling.”

Melikian, who majored in biochemistry at Norwich and lives in Massachusetts, called the unveiling thrilling. The thing he’d planned and arranged for a year and a half, was real at last.

Melikian sought fundraisers as creative as the project. The committee bought a nearly junked car from a Northfield repair shop and let students pay $5 to swing a sledgehammer like Thor (and smash like Hulk). That raised a few thousand bucks, Carley said.

Then, Melikian and a committee member, after a road trip and a mirthful customs moment, brought the doughnuts.

Patrice’s father, Vahik Melikian, attended the monument’s unveiling and said he was satisfied beyond words.

“He did a fantastic job, he did it all on his own,” the elder Melikian said of his son. “He reached out for advice, all we did was give him direction and he just took it all the way home.”

Within moments of the unveiling, the new statue was an instant lucky charm. Schneider tapped the ring he’d received from the civilian Class of 2020, against the statue. Metal met metal and the ring statue rang. (Schneider said the 2020 Corps students honored him by putting the two stars from his Vermont State Militia uniform on their rings). Several other students and alums followed Schneider’s ring tap in succession, creating a brief glissando.

The statue’s good luck may have drifted toward Sabine Field the next day when Schneider watched the Norwich-U.S. Coast Guard Academy football game.

The Cadets won on a closing-second field goal.