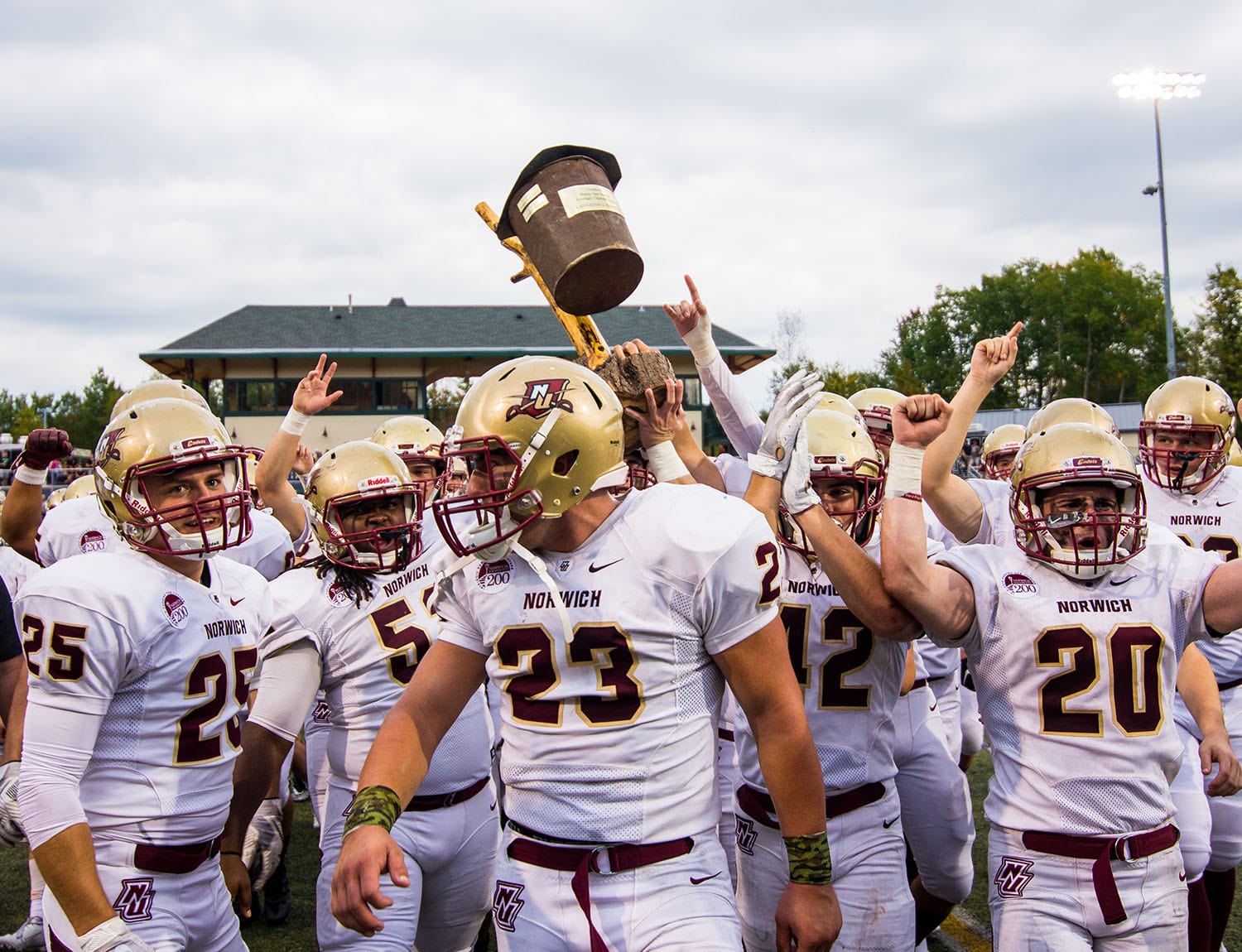 The Bucket will stay in Northfield.

Quarterback Matt Dunn threw for 300-plus yards, running back Aaron Conner ran for 100-plus yards to help visiting Norwich roll past in-state rival Castleton 35-14 on Saturday. The win gave the Cadets their second straight Maple Sap Bucket game win and helped them match their best start in 15 years.

Norwich was in command all game long against Castleton.

Castleton dropped to 0-4 for the season.

Although late heroics figured into two previous games — a blocked field goal in the next-to-last play in Week 1 and a made field goal on the last play in Week 3 — Norwich was in command all game long against Castleton. The Cadets scored on their opening drive (a 29-yard pass from Dunn to Trevor Chase) and built their lead to 14-0 by halftime and 21-0 early in the third quarter.

The first of the Cadets’ 70-yard-plus scoring plays yielded their second score. Dunn threw a 15-yard pass to wide receiver Manni Romero on a third down-and-8. Romero ran a post pattern, caught the ball and broke several tackles, racing down the sideline for the touchdown, the last score in the first half. The play covered 77 yards.

In the third quarter, Norwich built the lead to 21-0 on an eight-play, 80-yard drive capped by running back Connor Bourque’s 23-yard touchdown run. A 76-yard run from Conner gave Norwich a 28-7 lead.

The Cadets finished the afternoon’s scoring with 36-yards touchdown pass from Dunn to Chase.

STRONG ON BOTH SIDES OF THE BALL

To power Norwich’s offense. Dunn completed 25 of 40 passes for 365 yards. Conner rushed for 109 yards on 13 carries; Bourque gained 71 yards on 11 carries. Romero led the receivers with four catches for 151 yards, including a touchdown; Chase caught nine passes for 108 yards and a pair of touchdowns.

Norwich’s defense was equally strong, holding Castleton to 217 offensive yards — a season low for the Spartans — and allowing Castleton to convert just three of 20 third downs. Norwich senior linebacker Chris Ryan has 6.5 tackles to lead the team; sophomore linebacker Isaiah Williams had 5.5 tackles and a sack.

McCarthy completed 17 of 38 passes for 110 yards for the Spartans.