The kick that sticks ... in the nick of time 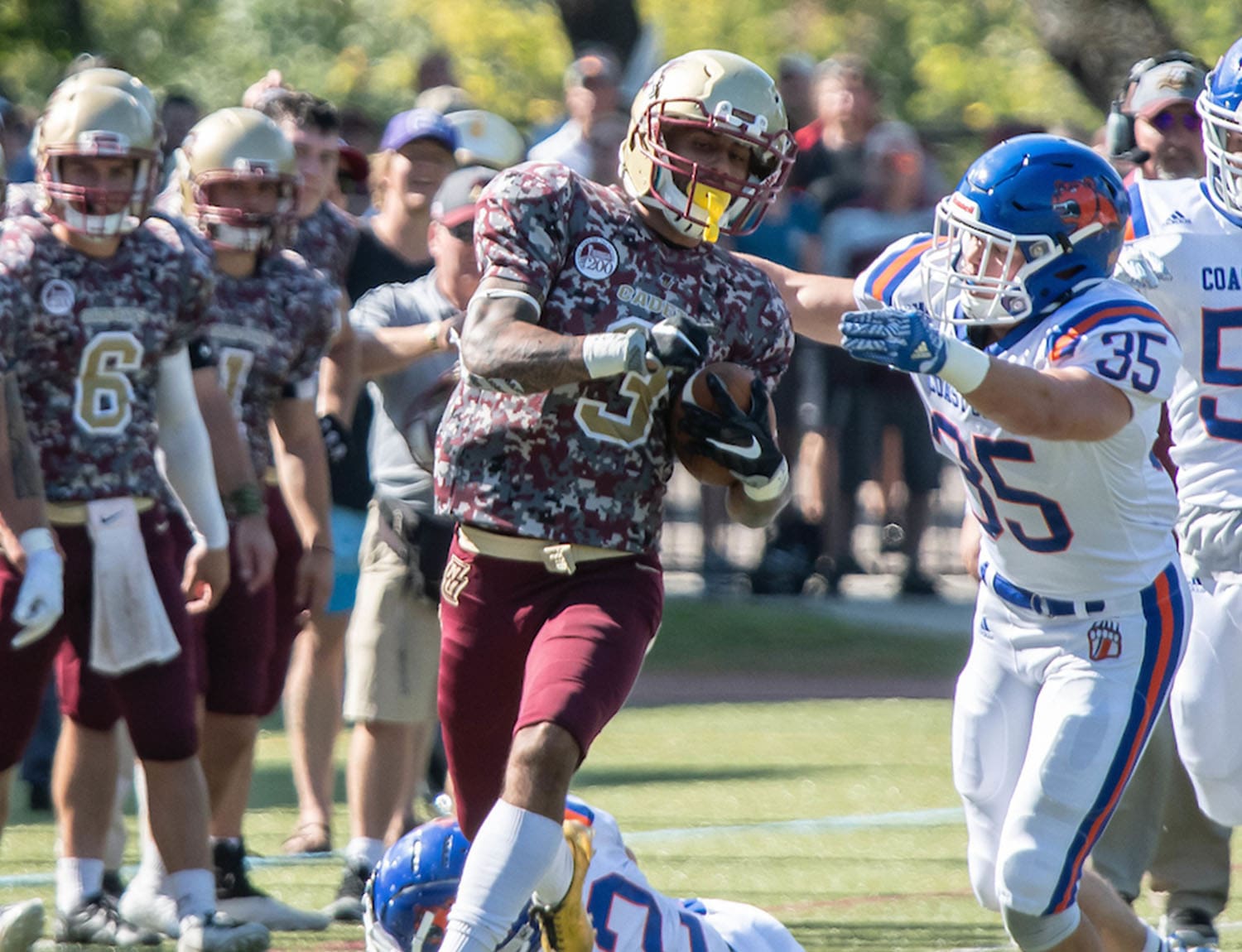 One swift kick could produce a fit-for-storybook ending; a miss could mean a fraught overtime.

Tamburro, Norwich’s junior kicker, had endured a trying Saturday afternoon. His 22-yard first-quarter field goal try, which would have given the Cadets an early lead, went wide right. A third-quarter score-tying point after nearly went awry; a line-drive kick struck a goalpost upright and banked in.

In the end, though, with the game on the line, Tamburro didn’t miss.

The game snapped a three-game “Little Army-Navy Game” winning streak for Coast Guard stretching back to 2004 and gave Norwich its first 3-0 start since 2012. The fast start landed Norwich at No. 7 in the Grinold Chapter's New England Division III football ranking.

In the fourth quarter, the Cadets set the stage for last-second heroics with two big drives — one for a game-tying touchdown, one to yield Tamburro’s moment.

The game snapped a three-game “Little Army-Navy Game” winning streak for Coast Guard and gave Norwich its first 3-0 start since 2012.

First came the touchdown drive, fueled by 49 yards of up-the-middle running plays, interspersed by a key drive-sustaining pass — on a fourth down-and-3, junior quarterback Matt Dunn hit senior wide receiver Ryan Reed on a 17-yard pass play. To cap the drive, Aaron Conner ran in from 13 yards out with 7:01 left to produce a 14-14 tie.

Norwich forced Coast Guard to punt with about five minutes to go. Manni Romero’s 15-yard punt return started the Cadets off at its own 49-yard line.

Again, a key pass, sandwiched among rushing plays, kept the 10-play, 42-yard drive going. Dunn converted on second down-and-24 with a 28-yard pass to Reed that moved the ball to Coast Guard’s 12.

“That was gigantic, it doesn’t get any better than that.” Norwich Head Coach Mark Murnyack said after the game. “Dunny didn’t have his best day as a quarterback, but when you needed him to he made a big play in a big moment.”

In the final play series, rushing plays on first, second and third down failed to yield a touchdown, although Norwich President Richard W. Schneider had walked in front of the stands, imploring fans to make noise for the Cadets.

The clock was down to one second. Munyack called on Tamburro, who’d spent sideline time intermittently kicking balls into a net with rhythmic thuds.

Back went the snapped ball. Down it went in the hold.

“It’s not really too much pressure on me,” Tamburro said. “The snapper does his thing, the holder does theirs and we’ve got eight other people blocking people. I have the easiest job, just putting the ball through the posts.”

Down went Tamburro’s left leg, up went his right. Up sailed the ball, splitting the uprights.

“They did their job, I did mine, we got through,” he said. “Defense and offense the entire game just gave it their all. We were down, we could have given up. I missed the first field goal, they came down and scored. Morale was down, but the leaders just wouldn’t let us give up and we ended up winning. So, it was great.”

Tamburro said he wasn’t even thinking about making the kick and relying on instinct; he was practicing a flow technique learned playing lacrosse — clear your head, make your goals.

“I just started sprinting, there was so much adrenaline and energy,” he said describing the moment after the kick. “I was so excited. It was an incredible feeling.”

Murnyack said he was speechless.

“I stood there, I didn’t say anything,” he said. “Because I couldn’t find the words.

“But immediately what I did was look at them (Coast Guard) and as we were going through the handshake line, I told their kids ‘We’ve been there. As good as I felt for our kids … I wanted to tell them that we’ve been on that side of it, too.”

Dunn shook off four interceptions, two on tipped passes, to complete 18 of 36 passes 171 yards and a touchdown. Romero caught six passes for 57 yards. Conner led Norwich’s runners with 17 carries and 80 yards.Coast Guard had the first half’s lone score — a 76-yard touchdown pass from quarterback Ryan Jones to wide receiver Damaso Jaime — early in the second quarter. The play began as a third down-and-6 with the ball on Coast Guard’s 24-yard-line. The game’s first 10 drives resulted in a punts or turnovers; six drives were three-and-outs.

Norwich tied the score at 7 on its third post-halftime possession. Manni Romero returned a punt 38 yards to put the ball on Coast Guard’s 20. Then Dunn threw over the middle to Connor Bourque for a 19-yard touchdown.

“We expected that type of battle against that team, that’s how it’s been since we’ve renewed the rivalry,” Murnyack said. “It’s been that close and we knew it was coming down to the end.

“There was something special about (the game) no doubt,” he said. “Everything leading up to it, they guys got asked a lot of questions, ‘Is this any different, is this any different?’ It’s hard not to look out there and say, ‘This is just like a normal game’ because it’s not. … It couldn’t have ended any better than that.”

Norwich will go for its first 4-0 start since 2004 at 3 p.m. Saturday when it travels to in-state rival Castleton University for the 11th annual Maple Sap Bucket Game. Norwich won the trophy last year.