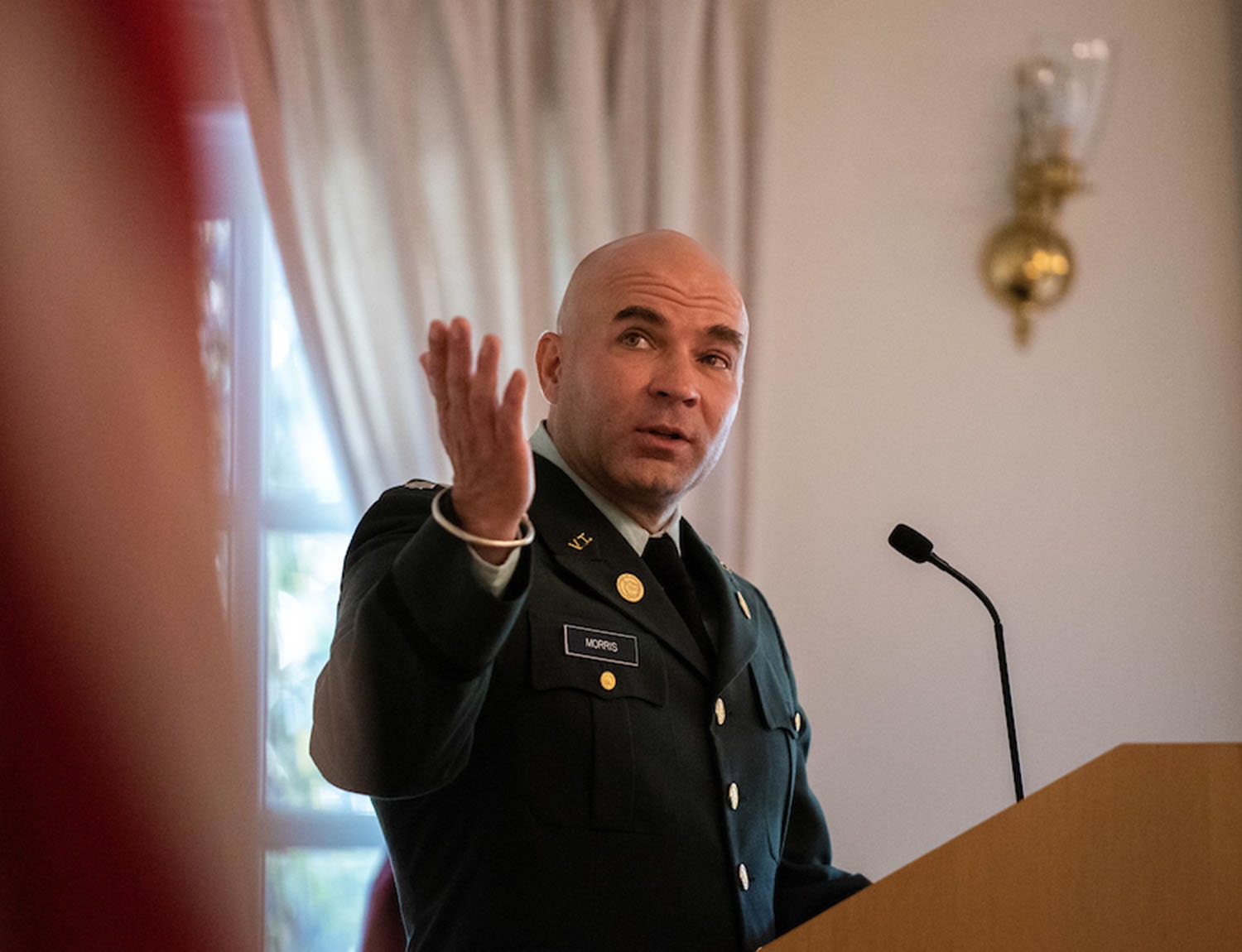 The PowerPoint slide showed a pair of uniformed, helmeted U.S. Army personnel somewhere far away, someplace they’d been deployed. The soldiers may have been in country for war, but in the photo, they were showing peace, shaking hands with children.

Hot take: Was this idle chatter? A waste of time?

Neither, said Dr. Travis Morris, a Norwich University criminal justice professor and director of the university’s Peace and War Center. On Sept. 9 in Milano Ballroom, he told an audience at the Association of Military Colleges & Schools of the U.S. Senior Military Colleges Conference that these moments of contact, whether handshakes or cups of tea, are strategic, and learning to manage them happens better by design than by chance.

Universities can teach these valuable cross-cultural competencies, Morris said, but must do so deliberately.

“The students that are involved in the planning process, they also own it.”Dr. Travis Morris, Norwich University criminal justice professor

The conference, backed by the association, ran in Burlington and Northfield, Vermont, from Sept. 8 to Sept. 10. The six senior military college members specially recognized by the U.S. Government under Title 10, U.S. Code — Norwich, Texas A&M, The Citadel, Virginia Military Institute, Virginia Tech and the University of North Georgia — were all invited; all attended except for The Citadel, kept away by Hurricane Dorian. Representatives from the Virginia Women’s Institute for Leadership, Tarleton State University (Stephenville, Texas) and Royal Military College in Saint-Jean-sur-Richelieu, Quebec, also attended as did representatives of the U.S. Defense Secretary’s Office and all three on-campus ROTCs.

During the conference, about 50 guests visited Norwich’s Northfield, Vermont, campus for three days of meetings, tours, briefings and presentations. They shared information and learned techniques for building camaraderie among administration, staff and cadets.

Morris said some cadets have as much talent for navigating national, ethnic or organizational cultures as they do for solving math problems; the challenge is harnessing and deploying this affinity.

“This is just as important as any other skill,” he said. “Someone like me who’s involved in propaganda analysis, I can have a computer scientist or someone who understands natural language processing (assess a situation), but there’s a chance that they may have no cultural understanding of what’s going on.”

Sometimes, he said, junior military officers have never been overseas until they’re deployed there. This is problematic, because it forces them to learn cross-cultural skills on the fly. Therefore, Morris said, establishing systems for learning these skills matters.

Norwich, with university leadership’s support, has developed these systems, he said.

“President (Richard W.) Schneider, the provost and others have agreed that this is something they want to focus on,” he said.

For example, helped by funding from the Washington, D.C.-based George and Carol Olmsted Foundation, Norwich cadets have gone overseas to lead other international cadets. In past years, he said, Norwich cadets have visited a pair of venues to study the Israel-Palestine conflict. This past summer, they went to the Balkans, visiting six nations and completing a North Macedonian peace and stability leadership operation.

Since 2005, about 67 students have benefited from this Olmsted grant and have traveled to: Tanzania, Macedonia, Kazakhstan, Vietnam, Croatia, Senegal, El Salvador, Chile, Turkey, Georgia and Israel.

To assemble a 10-member overseas team for the 2019 trip, Morris said, Norwich invited applications from students campuswide. Students selected for the team were assigned roles, minding the budget, navigating on the ground, analyzing discussions post facto. Faculty members stood by mostly as coaches.

“This focuses on two things — process and content,” Morris said. “The students that are involved in the planning process, they also own it.”

During their most recent trip abroad, Morris said, Norwich cadets met parents who lost children to terrorist attacks, members of the Israeli intelligence agency Mossad, officials from the Israeli parliament and West Bank and the NATO commander from Sarajevo, Bosnia-Herzegovina. The cadets also stayed on a Kosovar base.

Sometimes, Morris said, instead of venturing overseas, cadets have learned cross-cultural skills domestically by interacting with international students on Norwich’s campus or other campuses and by participating in specific exercises.

In the contest, a five-student interdisciplinary Norwich team, which collectively spoke 15 languages fluently, developed a mimicry tool to fight violent extremism, which was spreading in both Russian and English. Norwich’s team, like the others, had a $2,000 budget and Facebook advertising credits to spread its message.

The Norwich team’s tool sustained about 5,600 cyberattacks, Morris said, and the team made the finals and eventually won, visiting Washington, D.C., to present their project to State Department and Homeland Security Department officials.

“The point is (these students) are here at Norwich, engaging in international issues, with an international team,” Morris said. “These are the programs that if we really want cross-cultural intelligence for cadets to be more than just a minimalist perspective should increase, or be required, and should also grant a ranking that has an impact on how the cadets get commissioned.”