A rivalry fit for revelry 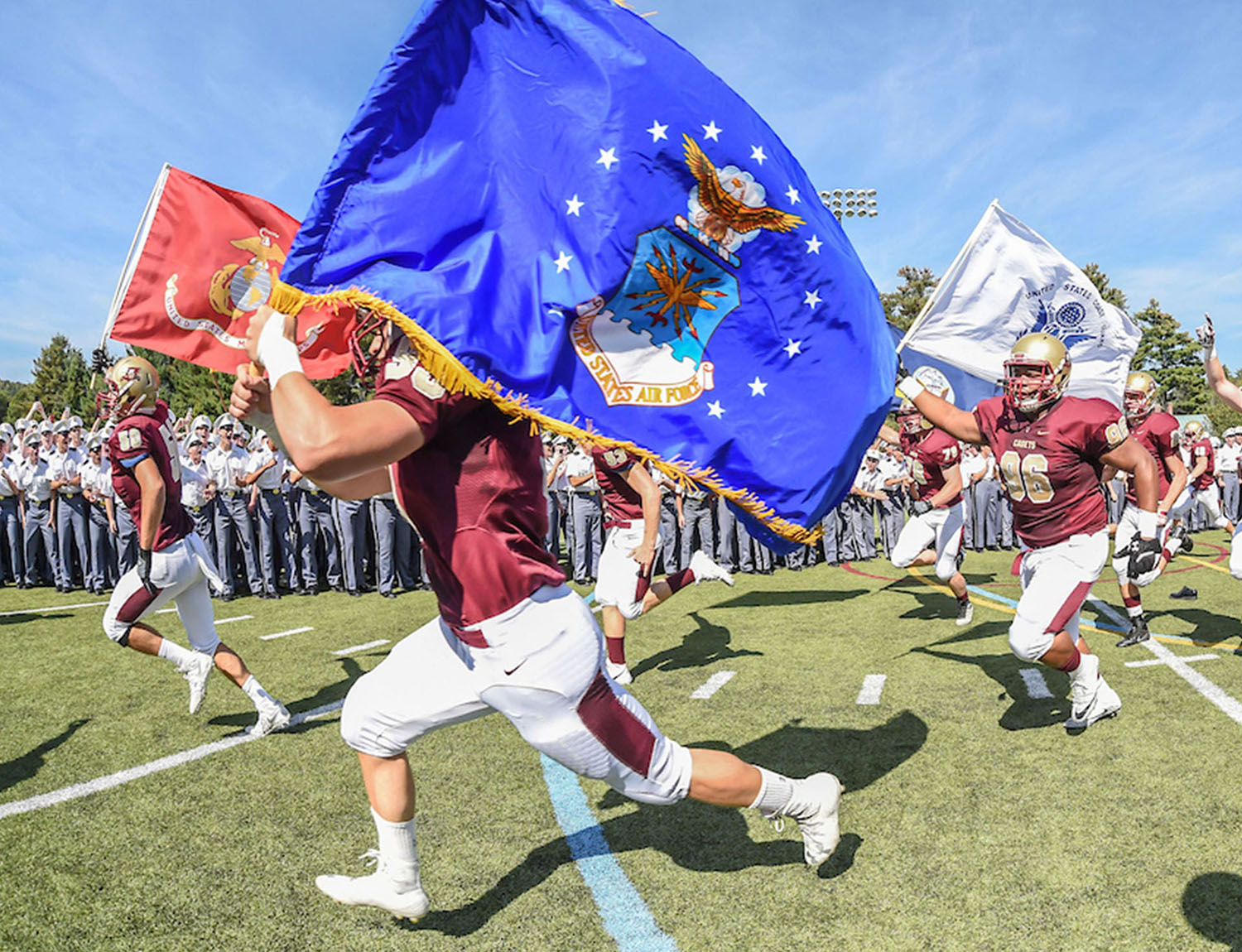 “The Little Army-Navy Game” pits Norwich University against the U.S. Coast Guard Academy for the 74th time, marking a new chapter in a football rivalry tracing back to 1929. Saturday’s 2 p.m. game on Sabine Field at Haynes Family Stadium offers the marquee sporting event in a weekend full of Norwich athletics.

The Norwich-Coast Guard game’s winner collects “The Mug,” a trophy donated by the publisher of the New London Day newspaper and first awarded in 1931.

“This is what college football is about.”
— Bill George, Coast Guard football coach

From 1954 to 2005, Coast Guard and Norwich played every season until conference realignment separated them. Each school has had five-game winning streaks in the matchup over the years. Coast Guard beat Norwich every year from 1971 to 1975; Norwich won the games from 1966 to 1970 and from 1976 to 1980.

In 1979, Norwich beat Coast Guard by 43 points, a program record against the Bears.

A particular highlight of the rivalry came in 2004, when Norwich erased a 14-0 fourth-quarter deficit and won, helped by two catches by Pierre Garçon, then a freshman receiver. Garçon would have 44 receptions for 1,017 yards and 13 touchdowns in his one season for the Cadets before transferring to Mount Union in Ohio. Garçon would eventually play 11 seasons in the National Football League for the Indianapolis Colts, Washington Redskins and San Francisco 49ers. Garçon donated an autographed game ball to Norwich that’s displayed in Andrews Hall.

Norwich President Richard W. Schneider has ties to both “Little Army-Navy Game” schools. He graduated from the U.S. Coast Guard Academy in 1968, was commissioned as an ensign in the Coast Guard and served eight years of active duty, including a tour of Vietnam. Dr. Schneider retired from the Coast Guard Reserve as a Rear Admiral in July 1998. In July 1992, he became Norwich’s 23rd president and has held the post for 28 years. (He’ll retire in May.)

“The Academy would put about half the regiment on a train to Northfield.” Schneider told the Norwich Record magazine in 2018, recalling his days as a Coast Guard cadet attending Norwich football games. “And after the game, Norwich threw a dance for us that lasted until 11 at night. Then we marched back down to the center of town to get on the train. And we had to get back before Sunday morning, because in those days, chapel was mandatory.”

In past years, the Coast Guard-Norwich rivalry has included some off-field dead-of-night hijinks.

A Sept. 30, 1984, New York Times article described how one year, Coast Guard infiltrators snuck onto the Northfield, Vermont, campus and painted the tank behind one Sabine Field end zone pink. On other occasions, the Times reported, the Coast Guard insignia had been found on the tank, and Coast Guard letters were painted in Sabine Field’s stands.

The Times also described how Norwich rooks guarded campus the night before the game in 1984, dressing in camouflage uniforms and watchfully waiting to halt any sailor invasion.

“Well, I didn't mind so much about the tank,'” Jim Earl, a then-Norwich fullback told The New York Times. ''I would get mad, though, if they stole our helmets. But then, I'd just paint my head gold and go out there.”

The Times reported how earlier in September 1984, a team of Norwich cadets had cut though a 7-foot-high fence and painted Norwich’s letters on Coast Guard’s field in New London, Connecticut.

The bear, living up to its ornery nickname, trashed the getaway van’s insides. And, the Los Angeles Times reported, Norwich’s group stopped to telephone the Coast Guard Academy, admit ursine thievery and say it was rushing back to Connecticut to return the beast.

In 2013, Norwich and Coast Guard signed a four-year contract to renew their rivalry and end a 12-year hiatus. The deal ensured each team would host two games and Norwich would have Coast Guard as its bicentennial Homecoming game opponent.

Saturday’s game will have plenty of pomp to go with its circumstance. With up to 8,000 alumni expected to be on campus, the crowd is expected to be historically huge. Also, the Regimental Marching Band and Regimental Color Guard will perform and rooks will form a gauntlet for the football team to rush through before the game; upperclassmen have joined this phalanx in previous years.

“This game means so much for so many reasons,” he said by email. “Any Homecoming game at Norwich is special, and the Coast Guard rivalry for ‘The Mug’ makes it only that much more special.”

Bill George, Coast Guard’s head football coach since 1999, said games at Norwich have always been electric. He expects that to continue Saturday as alumni return to reminisce and students turn out to root.

“The atmosphere is tremendous; it’s always been a place where there’s tremendous pride in their school and their team,” George said. “That it’s their 200th anniversary adds a whole other dimension. This has been a rivalry through the alumni for long, long time, as long as football has started.

EDITOR’S NOTE: If the game comes down to a final kick, know I am unrelated to Patrick Crowley, Coast Guard’s kicker and defensive back, whose point after helped the Bears win last week. No hate mail, please.