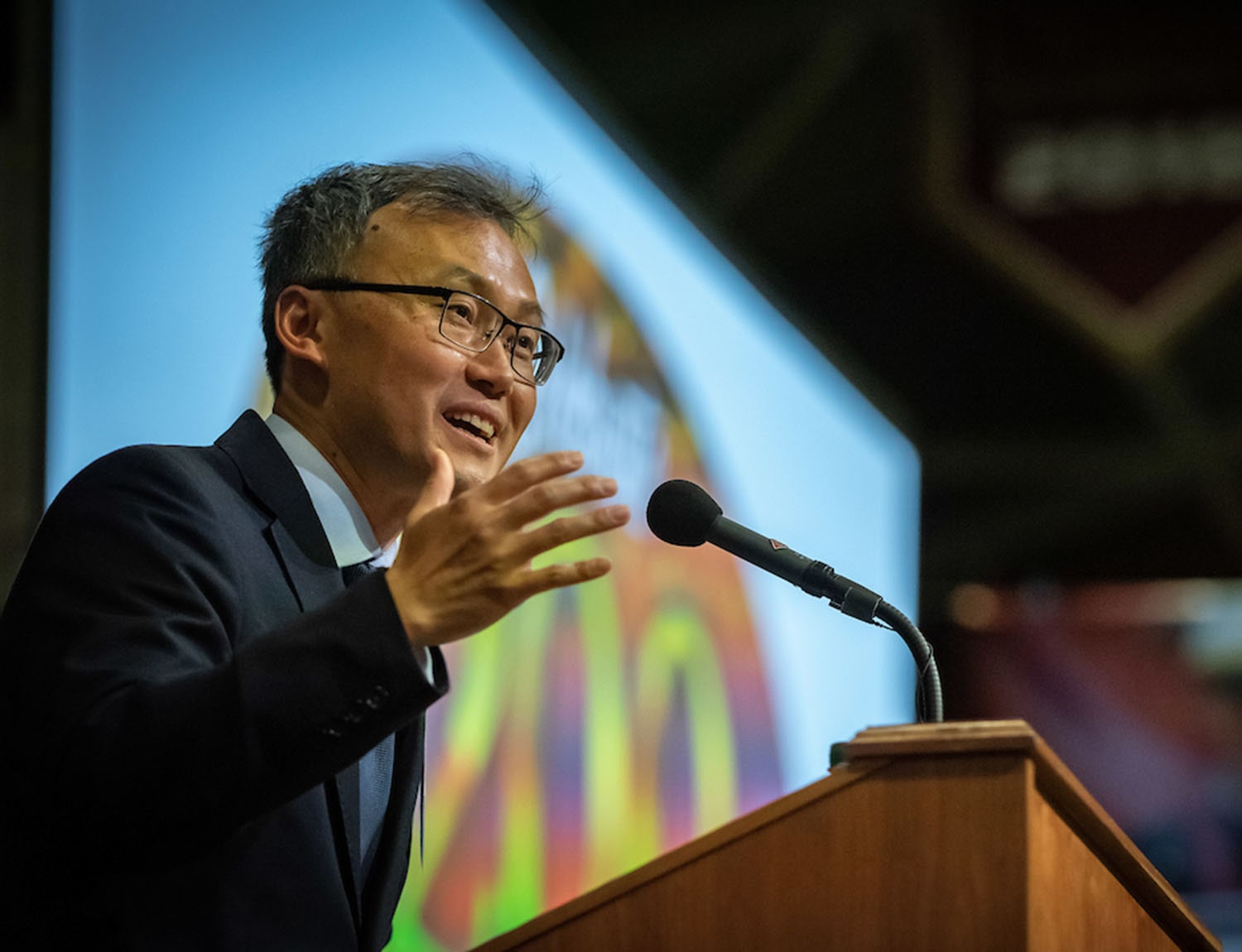 Research project examined past Injustices in Japan and Germany

Norwich University Associate Professor of Political Science Yangmo Ku accepted the Board of Fellows Faculty Development Prize for the 2019-20 academic on Wednesday at Kreitzberg Arena, thanking officials for their support and the university for its teaching opportunities.

The Board of Fellows Faculty Development Prize is awarded annually to a tenure-track faculty member or a group of faculty, including substantial involvement of a tenure-track faculty member, to fund a creative, curriculum, or scholarly project. It is funded annually by the board in its role of stimulating and rewarding university faculty for creative and pragmatic research.

Ku, who teaches in the Department of History and Political Science in the College of Liberal Arts and serves as associate director for Norwich University’s Peace and War Center, won for his project, year for his project, “Coming to Terms with Past Injustices in Japan and Germany: Sexual Slavery, Forced Labor and History Textbooks.” Ku's classes include ones on international relations, Asian politics, U.S.-China relations, and U.S. security policy.

In a speech accepting the award at the Board of Fellows Medallion Dinner, Ku said a classroom question he often asks has driven home the importance of his teaching. Many hands shoot up, he said, when he asks how many students want to be president someday.

"As a political science professor, I came to feel that I have a big responsibility to educate future leaders, not only in these United States, but also in the world and community," he said. "I find that Norwich alumni are amazingly selfless and supportive of current students' experiential learning opportunities."

Ku said he's had great opportunities in the past three years to lead students on research trips to Boston and Washington, D.C., the latter of which included visits to "three-letter" agencies including NSA (National Security Administration) and DHS (Department of Homeland Security).

The $8,000 award will support Ku’s project, which seeks to address these questions:

The former posits that perpetrator states are likelier to take a conciliatory stance on their past misdeeds when they deem doing so fits their security and economic interests. The latter hypothesizes that when transnational activism is powerful and a perpetrator state is led by a progressive ruling coalition, the state is likelier to adopt conciliatory policies toward historical issues.

“Norwich’s community of teacher-scholars is critical to the realization of the institution’s transformative mission and our students’ success,” Provost and Dean of Faculty Sandra Affenito said in a statement. “Dr. Ku’s research and scholarly work exemplifies the faculty’s commitment to serve as role models and mentors to students, which is at the heart of what we do as educators of future generations of leaders.”