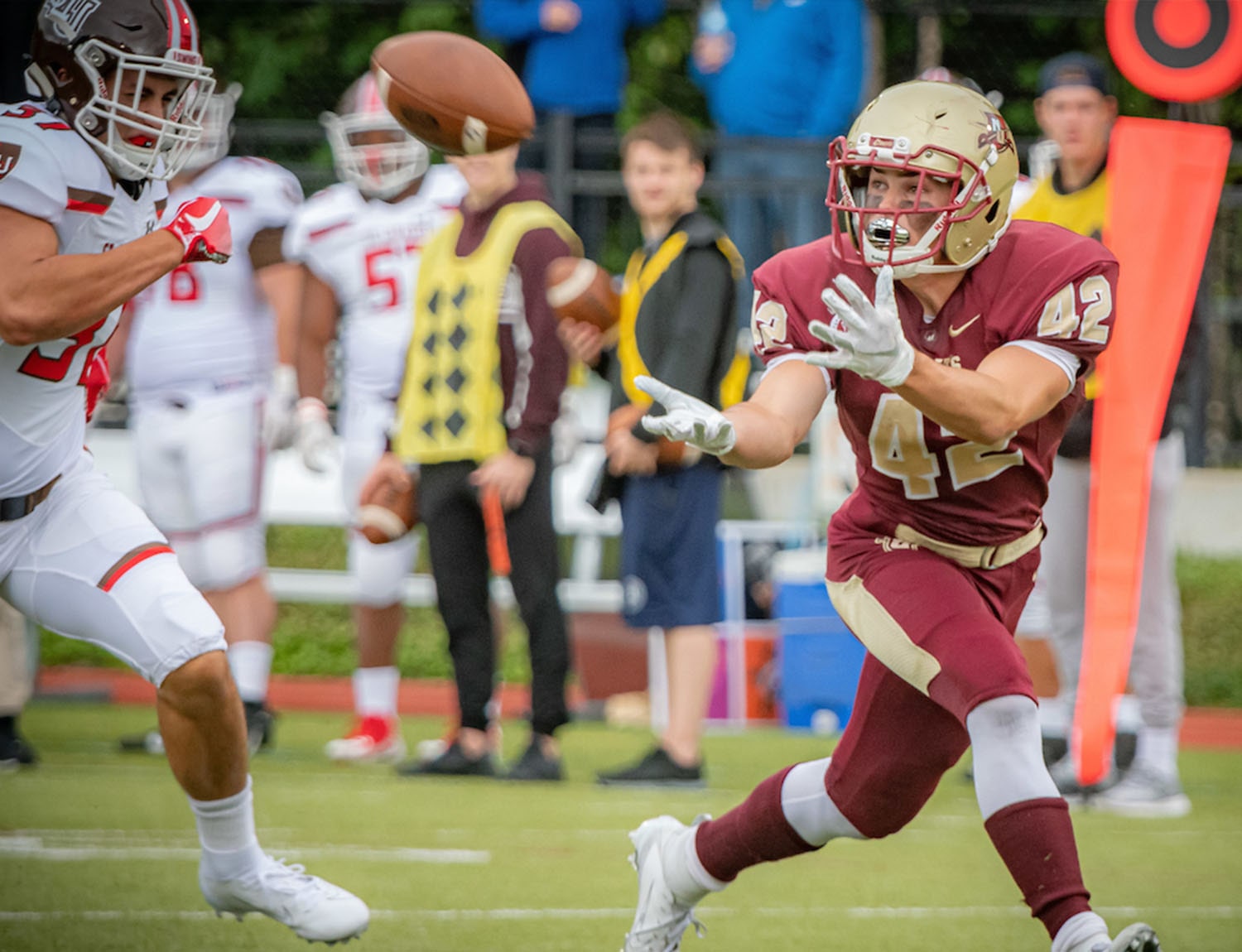 NORTHFIELD, Vt. – Norwich University’s football team set a pair of program records, one for throwing, one for catching, and secured its first Hoffman Cup trophy by topping St. Lawrence University 30-24 on Saturday on Sabine Field at Haynes Family Stadium.

Norwich roared to a 30-14 halftime lead and never looked back. The Cadets are off to a 2-0 start, their best opening since starting the 2012 season 3-0.

Cadets junior quarterback Matt Dunn completed a record 34 of 49 passing attempts to surpass the previous high of 29 completions set by Ben Clark in 2002.

The game was an air show; Norwich and St. Lawrence combined for 815 passing yards on more than 100 passing attempts.

Overall, Dunn threw for 99 yards and two touchdowns and helped seal the victory with a clutch 27-yard throw to freshman receiver Tristan Johnson on a third down-and-11 play with 3:32 left in the game. He earned New England Women's and Men's Athletic Conference Offensive Player of the Week for his performance.

“I honestly didn’t think I had even come close to the school record. It was definitely surprising at first, as none of the receivers go out on Saturdays looking to break records we go out there with one mindset and that is to win.”
— Trevor Chase, Norwich wide receiver

Norwich shook off an intercepted pass — Dunn’s only pickoff of the game — to counter with a 12-play, 44-yard drive capped by junior kicker Clyde Tamburro’s 37-yard field goal.

Norwich increased its lead to 16-7 when Manni Romero returned a punt 70 yards for a touchdown and led 23-7 after Romero later caught a 30-yard touchdown pass from Dunn.

Norwich answered with another touchdown to close the half. Chase made a diving catch of a Dunn pass in the end zone’s right corner to extend the Cadets’ lead to 30-14.

St. Lawrence had a 36-yard field goal in the third quarter and a 23-yard touchdown pass from Grochot to junior wide receiver Joe Viscardo in the fourth.

GET COMPLETE COVERAGE OF NORWICH ATHLETICS: