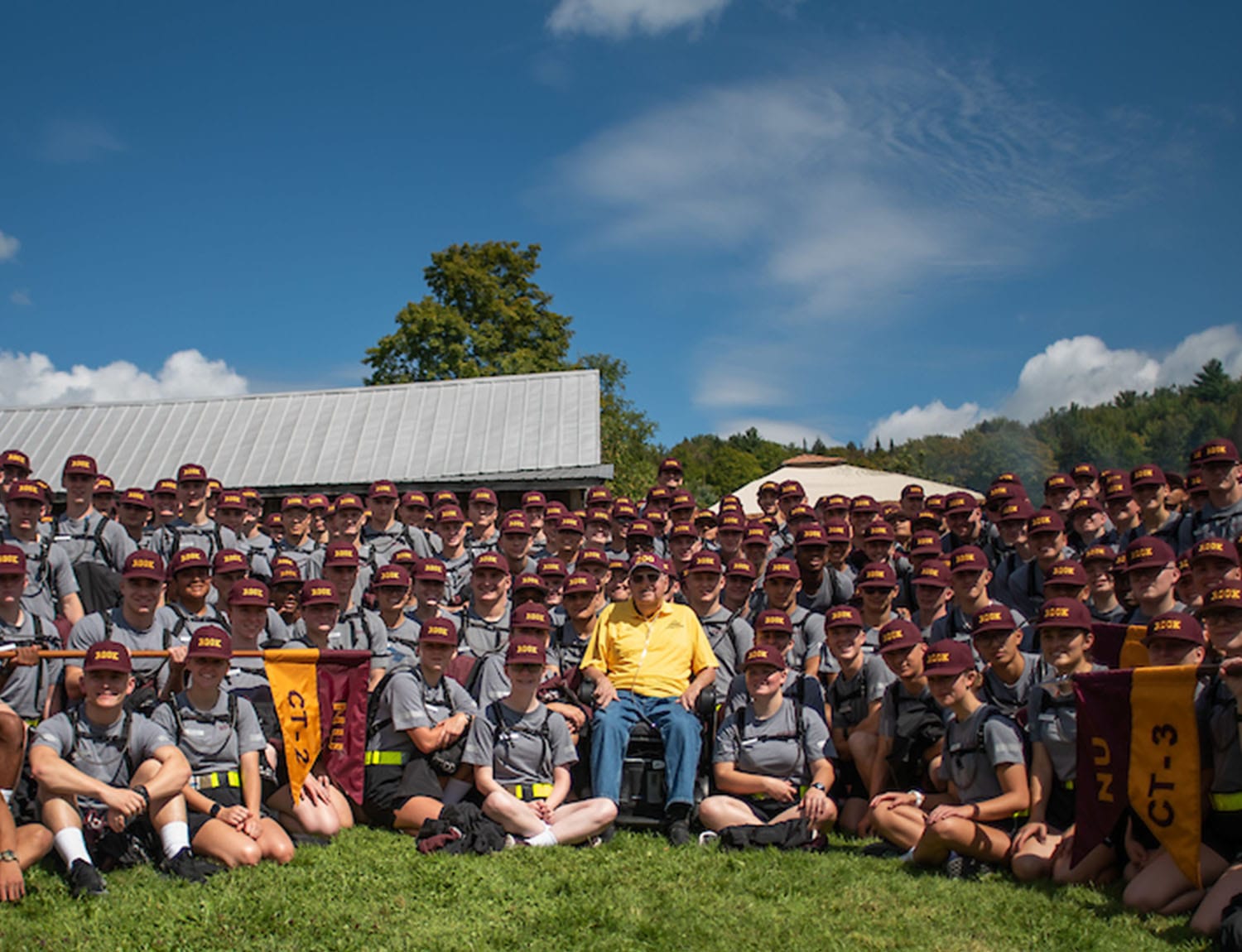 How does blowing steam sound? For Norwich University’s 2019 rook class, it sounded less like a whistling teakettle and more like a beloved annual festival.

On Saturday at Abare Farm in Northfield, about 2 miles from campus, the crackle of skeetshooting gunfire intermingled with the thud of crossing jousting batons and a stream of pop songs, many released long before the rooks were born — Don McLean’s “American Pie” (1971), Billy Joel’s “Allentown” (1982) and John Mellencamp’s “Small Town” (1985), to name three.

Underneath, chatter and laughter buzzed as the rooks, in matching commemorative black-and-yellow T-shirts, collected plates of cookout food —  hamburgers, chicken and ice cream — served by volunteers. This was Rook Dining Out, a 34-year-old tradition.

The letting down of hair was sometimes figurative — women cadets kept their neat regulation chignons — and procedure and attention to detail remained in force. About 450 rooks marched to and from the farm and laid their backpacks and maroon-and-gold ROOK baseball caps in neat rows in the farm’s grass.

But after two weeks of early wake-ups, marching, drilling and running, the revelry was real. Rooks could invite their parents, get cellphones to call home or nap after lunch.

Jack Abare ’57, welcomed everyone with a video address shortly after parachutists dropped in to start the event. Later, he moved to his porch, where he sat and chatted with anyone who came by, sometimes telling stories of Norwich alumni he’d known.

“I want to make friends I’ll have for the rest of my life here.”Jake Polanski, rook in Norwich University’s Corps of Cadets

He explained that he bought the farm in the 1980s, when one of his four sons was at Norwich. Abare had heard some of the rooks were unhappy and considering quitting the Corps and leaving school. So, at the Norwich president’s behest, he invited about 10 or 15 rooks to the farm for a cookout.

Abare said he likes making the rooks happy; they go through a lot getting into the Corps and merit a rest. He added that he’s glad to encourage some to stay at Norwich and learn life lessons.

Most young people, Abare said, don’t like taking orders, but eventually learn they must. Rook Dining Out he said, allows this acceptance to begin in a spirit of camaraderie and friendship. Learning to lead begins with learning to follow.

David Abare ’87, one of Jack’s sons (the others are Mark, Paul and John), said the cookout helps rooks who have never been to Vermont, or anyplace rural, acclimate. Last year, he said, some young cookout attendees hadn’t ever imagined that cows give milk or chickens lay eggs or how farms look.

The event also, he said, drives home the importance of Norwich’s particular “I will try” persistence. Quitting Norwich now would just make quitting anything else easier later on, he said.

Moreover, David Abare said, Rooks Dining Out expresses Norwich’s welcoming family spirit. Over the years, he said, the family has offered rooks more than food. He said his mother would sometimes give impromptu ironing or sewing lessons so rooks could get their uniforms in order.

Absorbing stories was in order for Jake Polanski, a rook from Meridan, Connecticut, who sat by Jack Abare. Polanski said life in the Corps had been difficult so far, be he likes the challenge.

“All your life, you’ll have challenges,” Jack Abare told Polanski. “This is an easy one.”

Polanski said he'd enjoyed the cookout and the march over.

“We’re all having a good time and we’re excited to actually, finally get to talk to each other, and … get to know each other a bit better,” he said, adding that his peers have helped him handle the mental and physical strains. “The family feeling that you have with your rook siblings, it just really motivates you to go further.”

Polanski said he followed his father’s example when choosing a college. His father loved the place and made lasting connections on campus. Polanski said he hoped to do the same.

“I want to make friends I’ll have for the rest of my life here,” he said.

Friendships seemed to be forming, or deepening, on every patch of green. Groups huddled under tents, threw footballs to one another, played volleyball, danced and lined up for activities.

Kyle Noble, a rook from Freedom, Maine, was chatting with several others about training. Much of rookdom so far, he said, had focused on minding minutiae, just as the U.S. Army basic training he attended before coming to Norwich had.

“They rush you around and they’re just trying to put stress on you all the time, and make you pay attention to details,” he said of his superiors in the Corps, adding that they do these things while building closeness in the platoon.

Sturgeon said changing uniforms on a five-minute deadline was challenging, especially when she had to keep every uniform pin in its place and precisely stow the clothes she’d taken off.

Domestic chores took on new dimensions, too, Sturgeon said. One superior taught he the finer points of bedmaking by having her repeatedly make, then unmake her sleeping space.

“You’d make your rack (bed) and it would look really good and you’d be really proud of it,” Sturgeon said. “And they’d come in be like, ‘Rip it up. Do it again.’”

This got annoying, Sturgeon said, but repetition will yield rewards.

“Muscle memory,” she said, seeing the reasoning. “In the future, you’ll be able to make a really good rack.”

All of this detail minding has happened on as few as four to five hours of sleep. Sturgeon and Ackerman said dozing off was verboten and fighting tiredness was part of their routines. If they stopped talking or writing in class, they’d risk dozing off. Same thing if they stopped moving out of class.

Ackerman said, “Me and my roommate do pushups and talk to each other.”

If the rooks were tired, they were glad to be tired, and adjusting, together. Mia Morales, a rook from Fort Lauderdale, Florida, said she’d learned to mind manners, communicate with peers and live with a large group. Sharing every experience, every moment with the others has been “pretty great,” she said.

“I saw that this is just a very different atmosphere from what I’ve experienced back in my hometown,” she said of her choice of Norwich. “And I really wanted to come here to be part of something bigger.”