With silence and solemnity, a moment to remember 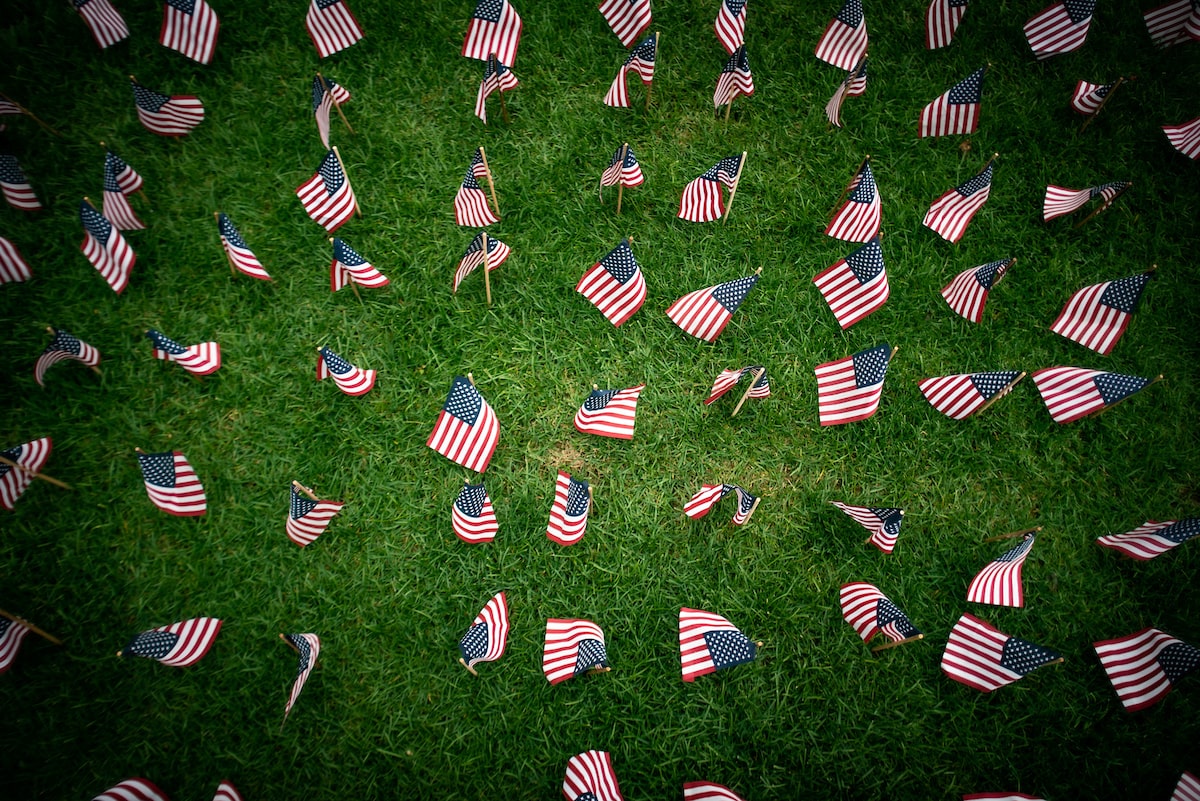 Riley Clark was in preschool when the hijacked planes crashed into the World Trade Center’s Twin Towers and Pentagon on Sept. 11, 2001, perhaps too young to fully grasp the nation-shaking act of terror and its deadly aftermath. But he said the attacks are one of his oldest memories; the fallout affected the world he’s grown up in.

“If I think about my entire life, all but four years there has been some conflict in the Middle East,” said Riley, 21, a senior political science major and a member of Norwich University’s Corps of Cadets. “We’ve been at war because of the events that happened that day.”

In the early evening Sept. 10, about 80 people, including members of Politeia, Norwich’s political science club, Corps members and volunteers, will plant 2,977 flags around Jackman Hall to honor the domestic and foreign victims of the 9/11 terror attacks. The flag planting was moved from its traditional site on the Upper Parade Ground temporarily because of resodding there.

The miniature planted flags will stand all day Sept. 11 and will be removed by evening Sept. 12. As in past years, standard-size flags mounted on campus will fly at half-staff.

Seniors in the Corps of Cadets will march vigil tours, slow ceremonial marches on the walkway ringing the Upper Parade Ground every half-hour beginning at midnight on Sept. 10. Riley said he’ll march from 3 to 3:30 a.m. Sept. 11.

In beginning the flag planting, Jagemann said, Anello followed the lead of the Young America’s Foundation’s 9/11 Never Forget Project, started in 2003 to encourage the commemoration.

On its website, the foundation, a Reston, Virginia, nonprofit group, said more than 11 million flags have been planted on campus quads and along high school sidewalks since 9/11 Never Forget’s inception. More than 200 high schools and colleges will participate in this year’s flag planting, the group added.

“The students who work with YAF to organize the 9/11: Never Forget Project are doing important work in today’s campus climate,” Young America’s Foundation spokesman Spencer Brown wrote Sept. 3 on the foundation’s website. “These patriotic memorials bring schools together to honor the victims of 9/11, show gratitude for the heroic first responders who selflessly worked to save victims.”

Even if Norwich’s current on-campus students were too young to have the visceral reaction adults had when seeing the 9/11 attacks, Jagemann said examining the political aftermath, national leaders’ responses and the resulting foreign policy are essential for teaching history and leadership.

“You don’t have to have lived through something to know something important happened,” Jagemann said. “By reflecting on this, we can look at our faults and our strengths and how we can move forward, but still be affected by that tragic event.

“Regardless of who you are politically, and what your goals and aspirations are, we can all stop, pause and reflect. We can share that moment together as a community,” he added.

"You don’t have to have lived through something to know something important happened."
— Jason F. Jagemann, Norwich political science professor

Kelly Evans, 20, a junior computer science major and sergeant in the Corps of Cadets, said a high school trip to the 9/11 Memorial in New York drove home to depth of the tragedy.

“There was a collective air of melancholy,” Evans wrote in an email, “and while I looked around at the names surrounded by silence, all the stories I had heard in high school suddenly meant so much more. Stories about how many people lost and gave their lives on that day, knowing that going into the towers meant they probably wouldn't come out. Remembering pictures of people falling through the air and not realizing how traumatizing it was to be on the ground; hearing thuds and not realizing until too much time had passed that not all of the loud noises were caused by falling debris.”

“I'm involved because I was given the opportunity to give my time to remember the fallen,” she added, “and to pay respect to the people who gave more than I will ever be able to.”

Clark, 21, a member of the U.S. Army ROTC and a company commander for freshmen in the Corps of Cadets, has been involved in the flag planting, organized by Politeia, in all four of his years at Norwich. He will lead this year’s efforts; he’s chosen team leaders who will place the flags and ensure they’re aligned in rows.

“We’re not only remembering the first responders and those killed on 9/11, but also all the aftermath and our brother and sisters who went off to fight,” said Clark, adding that he sent packages overseas to military personnel as a child. “This has affected all of us.”