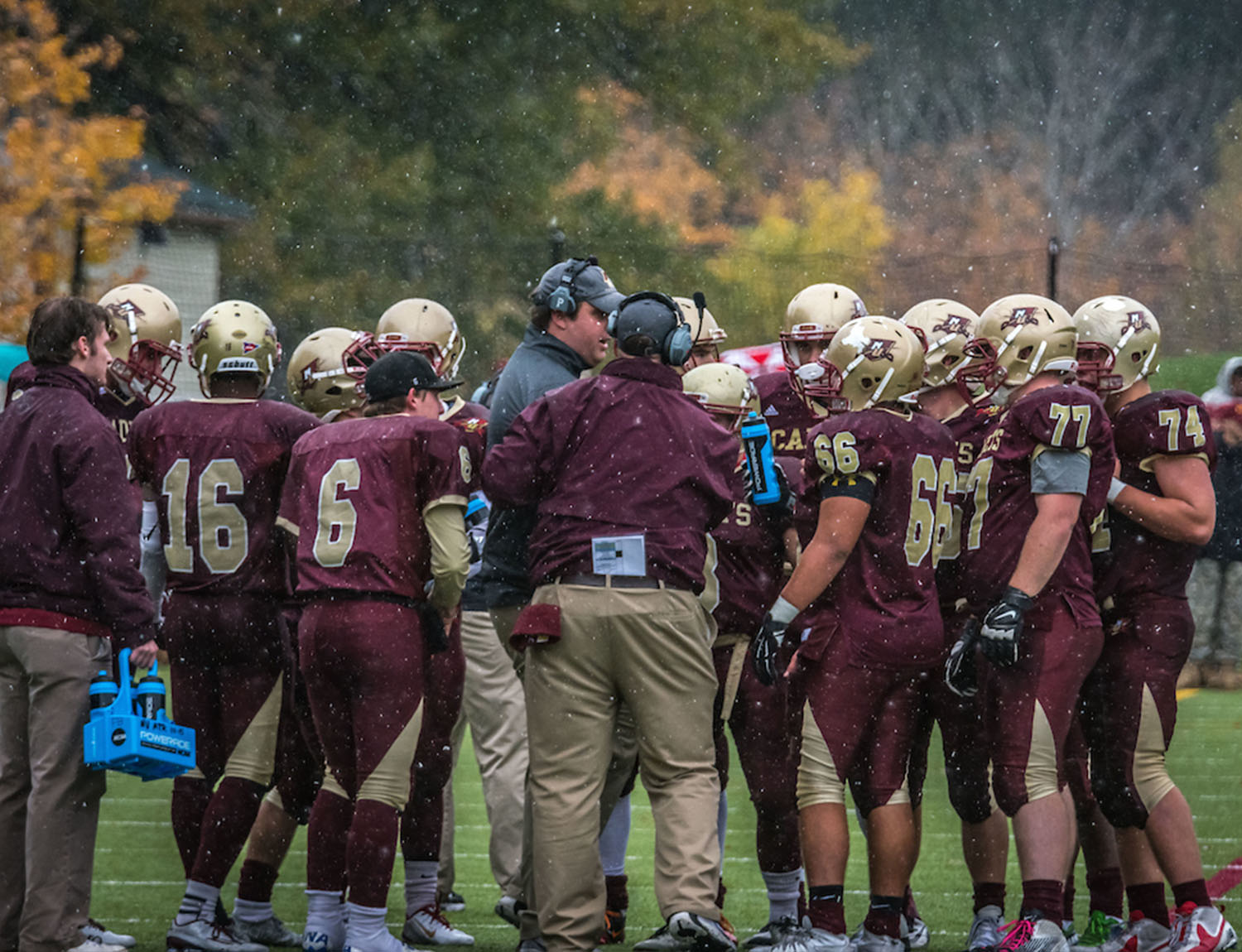 The game marked Norwich’s first victory in a football season opener since 2012.

The second touchdown of the day for Romero, a junior, capped an 11-play, 64-yard drive that featured two clutch late-down conversions. Freshmen Tristan Johnson and Trevor Chase had critical catches for first downs on the game-winning drive.

In the fourth quarter, the Seahawks marched 63 yards on 14 plays, highlighted by a 39-yard fourth-down catch by Ryan Lawton to get the ball to the Norwich 12.

The game marked Norwich’s first victory in a football season opener since 2012.

But Norwich senior Michael Corinna would come up big.

On a second down-and-10 pass into the end zone, Corrina caused receiver Pat Travers to bobble the ball and lose possession. An initial touchdown call was eventually overturned.

Then, on a fourth-down play with nine seconds left, Norwich forced the Seahawks to try a 28-yard field goal to tie the game. Burke blocked Angelo DiSanto’s field goal attempt.

"Our guys were really opportunistic when it came to that area of the field and, again, made the biggest plays in the biggest moments … when you look at the roster and the seniors out there, that’s a sign of maturity,” he added.

Norwich took possession and kneeled on the game’s final play to run out the clock and seal its instant-classic victory.

"The defense was definitely locked in that day. They definitely won us that game," Dunn said during an episode of "Behind the Shield."

With eight minutes left in the game, Cadets rookie Jordan Jackson came up with the biggest play of his young career. Jackson, who’d recently entered the game, picked off a deflected pass in the end zone to end a Salve Regina scoring threat.

Norwich had the ball, but the momentum shifted on the next play. Salve Regina’s Matt Sylvia intercepted a Dunn pass and returned it 23 yards for a touchdown to give the Seahawks their first lead of the game at 19-15.

Norwich went three-and-out on its next drive and punted the ball back to the Seahawks with 6:56 to play. The Cadets’ defense countered with its own three-and-out stop, including a stiff by Corinna on third down-and-3.

With 4:37 to go, NU got the ball back on its own 36-yard line. Dunn went to work, hitting junior Brandon Mynter for a 4-yard gain and then finding Johnson for a huge diving catch on third-and-6 to for a first down.

Chase had two big catches on the next set of downs for 10 yards and then gained 7 more yards on a fourth-and-4 play to keep the drive alive.

Romero again stepped up with a big catch for 31 yards on first down to get the ball to Salve Regina's 5-yard-line and set up the eventual game-winning touchdown.

On third-and-goal, Dunn rolled left and fired a strike to Romero, who caught the ball and planted both feet inside the goal line while fending off a Salve Regina defender. It was Romero’s ninth career touchdown catch.

Romero finished with six catches for 160 yards and two touchdowns, including an 83-yard scoring catch on Norwich’s first offensive play of the game. Dunn threw over the middle, hitting a streaking Romero in stride. The speedy junior wideout ran away from the pack to score and give the Cadets a 6-0 lead on the first play of the new offensive coordinator Marc Kolb era.

Dunn, a junior, finished the game with 307 yards passing on 24 of 41 attempts and three touchdowns to lead Norwich's offense.

On defense, Norwich senior Austen Greene led the Cadets with 10 tackles and one of the team’s three interceptions (Corrina and Jackson, a freshman, had the others). Senior Chris Ryan had nine tackles and sophomore Isaiah Williams had eight tackles, forced one fumble and recovered another. Tavares Ward and Burke each had seven tackles.

Norwich returns to action at noon Saturday, Sept. 14, when it hosts its home opener against St. Lawrence on Sabine Field at Haynes Family Stadium. The Saints have won four straight meetings, including a 40-7 win last year in Canton, New York. Norwich will look to claim the Hoffman Cup trophy for the first time since it was added to the long-standing rivalry in 2017.