With Dewey, we did 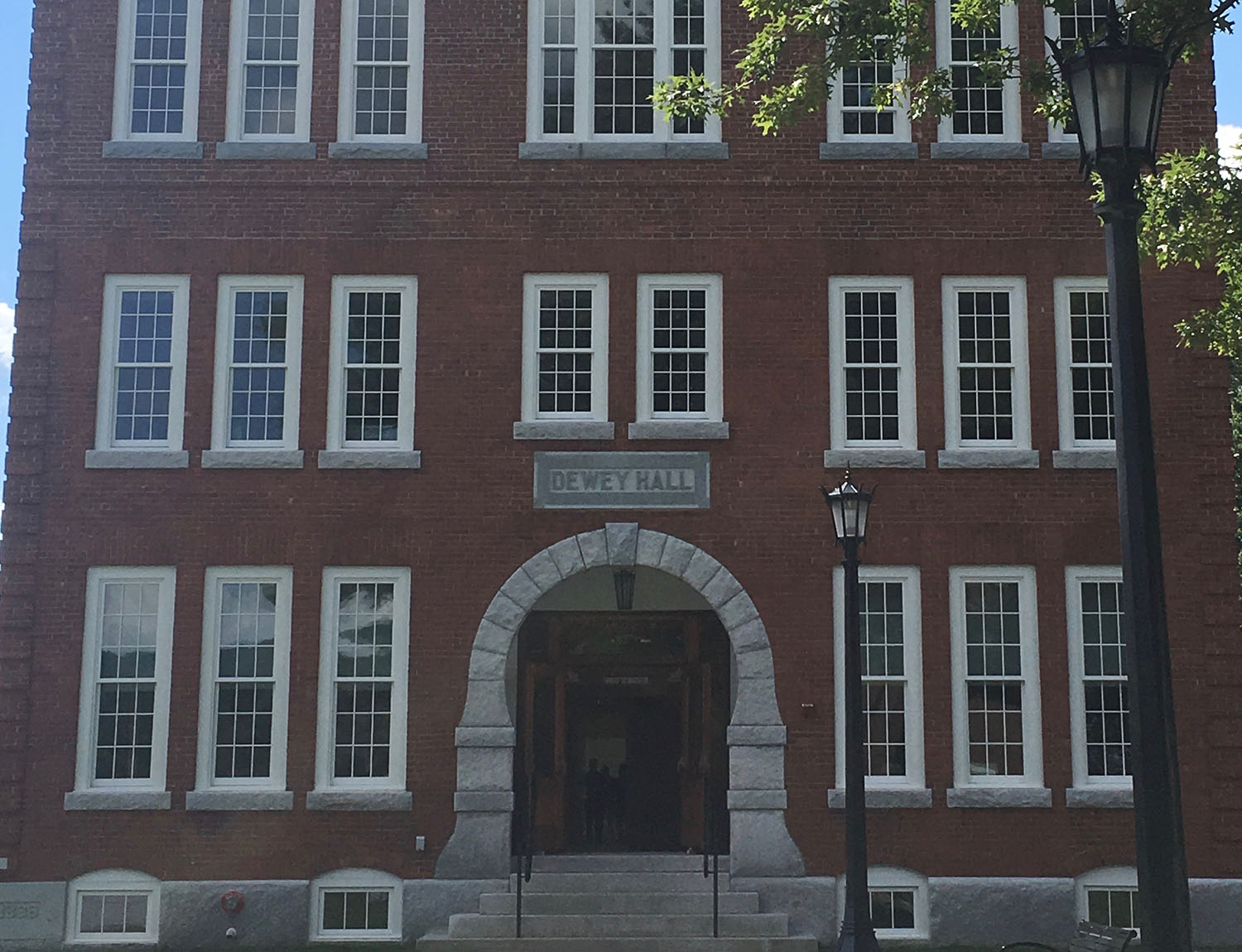 The third-floor windows of the newly renovated Dewey Hall offer a take-it-all-in panorama of new-school-year Norwich University. On a recent morning, the long rectangular path bracketing the Upper Parade Ground teemed with people, lugging books, practicing marches or traipsing toward class or activities.

Dewey’s opening, marked by an Aug. 29 ribbon cutting, offered a wide-angle view of both campus and Norwich’s five-year $110 million Forging the Future Campaign. It also capped a major learning experience for architecture student Kene Onwe (more on him later.)

Dewey was the last of the buildings to have its renovation finished in the campaign, which has exceeded its original $100 million goal. The fundraising enabled the construction of Mack Hall, a new, four-story academic building on campus that opened in August 2018, significant renovations to Dewey, North and Ainsworth halls, a modernization of the Kreitzberg Library, scholarships and investments in technology.

At the ribbon cutting, Forging the Future campaign Chairman Joel Kobert ’65 said the campaign had reached $109 million ahead of its planned Dec. 31, 2019, end date.

“What Norwich has done with its great leadership is that we’ve been on the cutting edge of reacting and being there quicker in terms of building and … making our buildings fit today with what students are and the people that are going to need it,” Kobert said. “That is a tribute.”

The renovations have been remarkable and satisfying, Norwich President Richard W. Schneider said; the area has been transformed.

“These renovation jobs have been very important to maintain our history,” Schneider said. “This is about our legacy and the people that came before us who we are honoring by restoring these buildings.”

Dewey Hall is named for George Dewey, a Montpelier, Vermont-born U.S. Navy admiral who led his fleet to victory in the Battle of Manila Bay in the Spanish-American War. Dewey attended Norwich before entering the U.S. Naval Academy. The building’s renovation comes about 120 years after the building’s first cornerstone was laid Sept. 14, 1899.

The building, the third on Norwich’s campus, was completed in 1902 and housed administrative offices, an assembly hall, the library and museum, the chapel, and space for the U.S. Weather Bureau. Schneider said alumni have told him stories about Maj. Gen. Ernest Harmon, a former Norwich president, having his office in Dewey and throwing open windows to tell cadets to straighten their covers (hats).

A fire in 1925 destroyed Dewey Hall’s third level, which originally had a sloped roof and dormer architecture. When the building was rebuilt, a full third floor was added with a flat roof. A change in brick colors between the building’s third and fourth levels represents the “fire line” from the blaze.

“The renovation exemplified here, as well as in Mack and North and Ainsworth, represents a significant investment in our exceptional faculty,” Schneider said. “It’s all about teaching and learning space, which is different today than it was in 1902, when all the desks were in a nice line and rank and file, just like (the students) were marching. That’s not how they learn and it’s not how we teach anymore.”

Up to date, up to code

Dewey's south face was extended, bringing the building closer to the pedestrian walkway that leads from the Upper Parade Ground to the White Chapel. Also, Dewey’s stair tower and elevator were replaced and its fire egress was improved to the building up to legal code.

“(These spaces) provide opportunity for students to move beyond their books, their papers, their headphones and into meaningful person to person dialogue,” Affenito said.

Now, as promised, back to Onwe. The Norwich senior, who led tours of the new Dewey, he was intern assistant and construction manager for the Dewey project. He said he worked on the project from summer 2017 until its finish.

Over the just-completed summer, Onwe worked full time managing workflow, often mitigating disruption for faculty and staff on campus. He also worked toward his degree, carrying 15 credits. Yes, he said with a smile, doing so much at once was a little crazy.

During Dewey’s renovation, designers let university goals and values guide them as they bridged the past and future; they wanted the addition, for example, to fit architecturally and stand out as new.

Also, Onwe said, the university worked with the Vermont Historical Society to ensure architectural details, such as original wood and leather in walls, were removed during construction, stored and later reintegrated.

Onwe, who plans to pursue an architecture masters at Norwich after he graduates in May, said his timing was lucky; he was where the projects were. He said he did something he hadn’t imagined.

“I never saw myself having to tell subcontractors, ‘Hey, this is what we want, we’ve got to do it that way,” he said. “It was a humbling experience for me.”

DEWEY HALL RENOVATION BY THE NUMBERS