A benchmark of gratitude 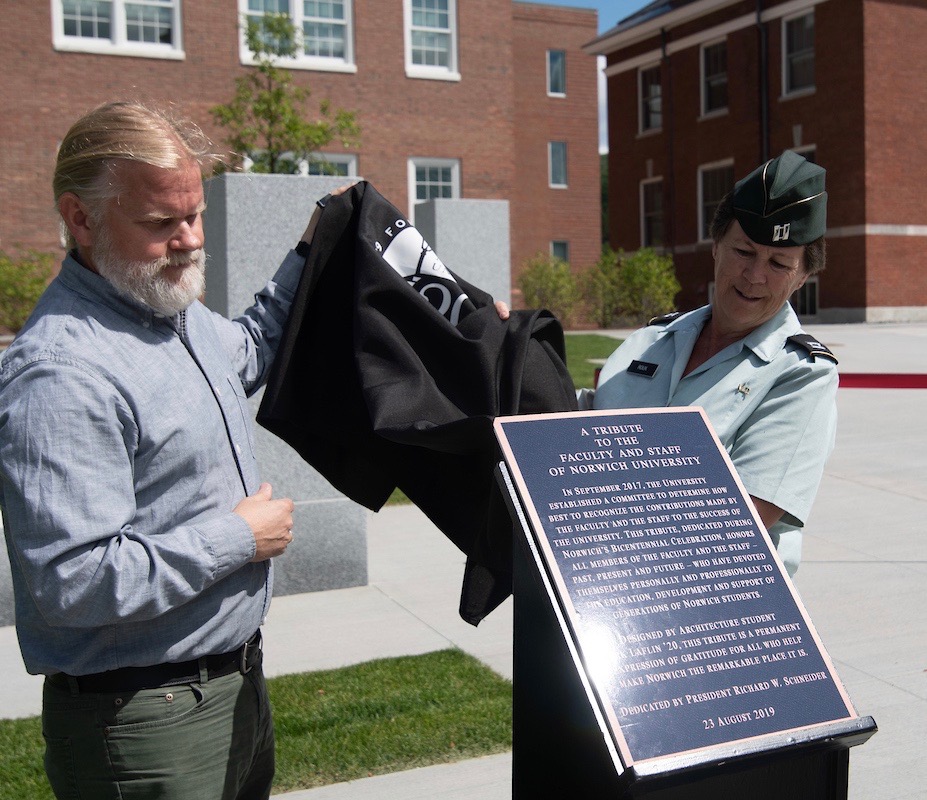 A task that seemed at first ephemeral for School of Architecture + Art student Park Laflin ’20 — a design homework project — became tied to the eternal — the tens of thousands of crossing people and paths that have kept Norwich University’s scholarship progressing for over two centuries.

Laflin, who is studying in Berlin, Germany, this year and wasn’t at the ribbon-cutting ceremony, said by email that the horizontal benches represent the present — the current students, faculty and staff — and the vertical elements represent the past — bygone members of the university’s community.

The faculty and staff committee that began planning the memorial in September 2017 decided against including names on the eventual structure, architecture Professor Timothy K. Parker said. About half of the tribute’s smooth, vertical surfaces will, sometime this year, be engraved with pairs or series of proposed words voted on and perhaps modified by staff and faculty, Parker said; the rest will be left blank for future Norwich faculty and staff to leave their mark.

Laflin said the walkway around the elements links the campus’ center to North and Ainsworth halls, recently renovated and to Mack Hall, which opened in 2018, and is based on a grid of the same dimensions as the Harmon Memorial Wall, which features names of alumni, faculty, staff, and other significant contributors to Norwich’s improvement of its academic teaching and learning environment.

“The orientation of the monuments almost perpendicular to the path helps people to slow down and take some time sitting on the benches and in the grass between classes,” Laflin said. “It pays homage to tradition while also looking forward and giving people a sense of place in the moment.”

The committee, which began planning the monument as it began planning events for Norwich’s bicentennial, had asked Norwich’s community, especially School of Architecture + Art students and alumni, for ideas. Laflin’s design was chosen from among the nearly 20 received.

“The committee overseeing the process of this memorial was fantastic to work with,” Laflin said. “There was a lot of trust between me and the committee, which was very important. They were very receptive of my ideas and taught me a lot about … planning and building the ideas that were on the paper.”

Parker said because faculty and staff contributions to student learning are myriad and varied, sometimes implicit and in passing, he and the committee chose a slightly abstract design for the tribute. Laflin’s design, he said, emerged partly because it involved both landscape and objects.

“What we’re looking at here is a space that’s all driven by opportunities for interaction,” Parker said, “because we felt, and Park felt, that the nature of learning as nourished by faculty and staff and is something that happens in the everyday interactions, formal and informal.

“And so,” he added, “this embodies that in a way that hopefully anyone can experience in and through your daily lives as you come and go throughout the campus.”

Schneider said the tribute’s arrival helps cap five years of campus construction and renovation sometimes marked by chain-link fences, office moves and clouds of dust. But, he said, the results, enabled by the $110 million-plus Forging the Future fundraising campaign, are remarkable.

“I’ve got to tell you, it’s even more beautiful than I thought it was going to be,” he said. “I think it’s just stunning and what a great way to start our third century of service.”

Laflin said his homework took on a life of its own and he’s grateful.

“I haven’t seen (the monument) in person yet, but I have received pictures throughout the process,” he said. “And I’m just impressed with the people who actually built it and made the ideas come true. I have had a lot of great help on this project and it is for everybody at Norwich — past, present and future.”