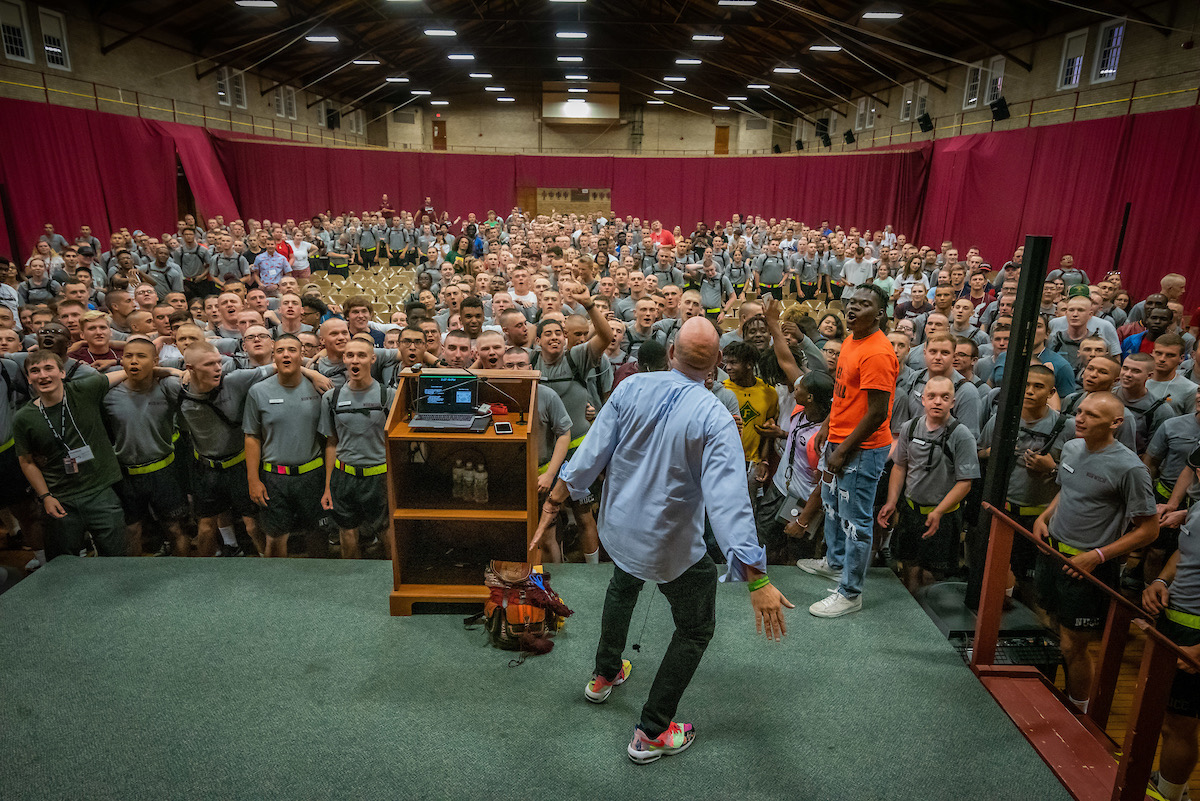 How afraid would you be to sing for a room full of strangers? How about in a place where you’ve recently arrived? What if you were just learning the lyrics?

Turned out a civilian student named Kesly Dolce would discover he was.

Incoming Norwich University students, rooks and civilians, learned the answer Tuesday night at an Orientation Week get-to-know-you session at Plumley Armory. Dr. Derek Greenfield, aka Dr. G., a speaker dedicated to inclusive excellence and positive change, was the headlining guest for the event arranged by the Diversity, Equity and Inclusion Office. He would lead the singalong.

Ryan Johnson, Norwich’s associate dean of students for health, orientation and commuter support, had brought Greenfield to campus to address civilian students in previous years. Encouraged by past rave reviews, Johnson invited Greenfield back to address both cohorts.

“It just shows the impact of everyone being inclusive, of helping one another. The gentleman (singing) felt really wonderful and everyone felt really positive in that moment.” Ryan Johnson, associate dean of students for health, orientation and commuter support

Greenfield has related to many academic crowds. He holds a doctorate from the University of Washington, a Doctor of Education degree from Cape Peninsula University of Technology in South Africa and held faculty positions at St. Augustine’s University and Shaw University in Raleigh, North Carolina. He is now vice president for student engagement and campus life at Kentucky State University.

In Plumley, he asked the audience for a show of hands of people who sing in the shower, but not in public. From among the raised-handed students, he chose Dolce, clad in an Orange Crush-colored football camp T-shirt and jeans, to come onstage.

Greenfield asked Dolce how comfortable he’d feel, on a 1 to 10 scale,  singing to the audience.

Greenfield replied, “How would you feel if we had some other people come up here and sing with you? Would you feel better?”

So, Greenfield crowdsourced the audience for fellow singers.

“He got swarmed,” said Johnson, who’d watched the mass move stageward from nearby.

Greenfield assembled some newcomers near the stage into a quickie chorus and then led Dolce through a famous Bill Withers tune, background music not required.

“Lean on me,” Greenfield sang, having Dolce repeat after him.

“After he sings those three words,” Greenfield told the group at the foot of the stage, “I want all of you who are up here to join in.”

Soon, Johnson said, with the lyrics displayed on an onstage screen, voices joined in and volume built.

“When you’re not strong,” the students sang, continuing the lyric, “and I'll be your friend. I'll help you carry on.”

The bonding, Johnson said, was palpable, and powerful. Students in the crowd draped their arms around one another’s shoulders, linked arms and swayed in unison. After two renditions of the stanza, Greenfield turned to Dolce and asked him to rerate his singing confidence.

The audience roared in response.

Greenfield, who has spoken nationwide and worldwide, said volunteer singer confidence usually rises after these ditties, but not always so much.

“Most people say 11 or 12,” Greenfield said. “But this student’s response was striking. It reflected how the energy and the power of that moment, in particular,  was overwhelming. It was a powerful example of how when people feel included and supported, their motivation is transformed.”

“It just shows the impact of everyone being inclusive, of helping one another,” he said. “The gentleman (singing) felt really wonderful and everyone felt really positive in that moment.”

Johnson said Greenfield spent the rest of the 75-minute program leading other exercises, breaking the students into groups sometimes as small as three. One drill had students stand if they’d faced difficult moments, at home or in life. Seeing that others shared a similar plight, Greenfield said, offered another chance for mutual support.

A different session had students exchange details about their lives, sometimes from the stage. Johnson and Matthew Roche, Norwich’s director of Diversity, Equity and Inclusion, said the support swelled with each accounting.

“Everybody rushed the stage,” Roche said. “Every time. It was amazing.”

Johnson added that students coming offstage received hugs, fist bumps and other support as they melted back into the crowd.

“Overall, the entire thing was one of the best events that I have ever seen,” Johnson said. “And I think it was one of the best things that could have happened here at Norwich. The whole purpose was to bring the two student lifestyles (Corps and civilian) together, to understand one another, to spend time together and ... I think it was extremely effective in doing that.”

Dolce would agree. Having so many willing co-singers left him feeling exultant, included and at home.

“The experience of having all of my brothers and sisters rushing to come support me felt so relaxing,” he said afterward by email. “Norwich University is really a home for all of us. This is my new family for not only four years, but forever.

“The performance I had felt like a 20 because it was nice knowing everyone has your back no matter how you are feeling, they are always there for you and I appreciate all of them that came up to show love.”