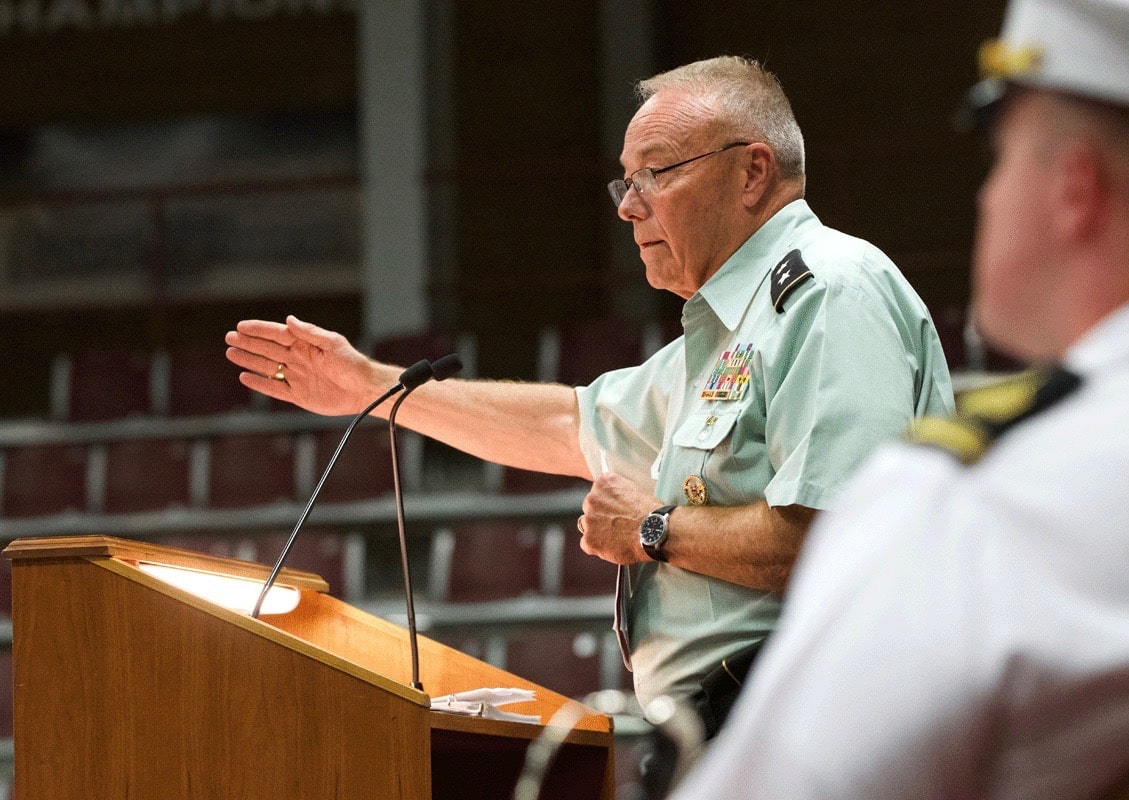 Norwich University’s 2019 rook class arrived on campus Sunday, and President Richard W. Schneider invited them to accept the challenge before them and persevere, because perseverance will portend success.

The 2019 rook class comprises 465 new students and 24 civilian-to-Corps transfer students, hailing from 37 states, the District of Columbia, two U.S. territories and six countries. They represent 32 academic majors, 74 are attending on nationally competitive ROTC scholarships; 24 are entering into the Honors Program; 15 have been selected for Norwich’s Civic Scholars program. Thirty-six are legacy students.

In his remarks, Reardon hailed the rooks’ diversity of life experience and talents.

“They are athletes. They are club members and officers. They are class presidents. They are from JROTC, Sea Cadets and Civil Air Patrol. They are first responders. They are scouts. They are valedictorian and salutatorians,” he said. “They are the camp counselors, lifeguards and baggers at your local market. … They have accomplished many things and have overcome personal struggles … They are leaders. They have dared to be different.”

This year marks the final rook class welcome for Schneider, who is preparing to retire in the spring. He has spent 28 years as Norwich University’s president, making him one of the country’s longest-serving presidents in one of the country’s oldest universities; Norwich celebrates 200 years this year.

Schneider first spoke to assembled parents, warning them that their daughters and sons may struggle in the short term. He asked the parents to help their new Norwich students hang in and strive.

In return for the tough love, Schneider promised Norwich will prepare the students for postcollege life — they will be confident, competent and employable.

“The whole world will want to hire them,” he said, “not just our United States military, but everybody else, because they’re smart and they work hard … they’ll show up on time and they’ll stay there until the job is done, because that’s what we do. We do not quit.”

Then, Schneider turned to the rooks. He said if they live Norwich’s guiding values, the rooks will never embarrass their parents, their communities or their nation.

“You stand on the shoulders of the men and women who have gone before: Leaders of character who have gone on to serve — in their communities, in the military, and in the world,” Schneider told the rooks. “Norwich is a family of leaders. The beliefs and aspirations of this family are derived from the ideas and actions of one man, (founder) Captain Alden Partridge, a leader who was decades — if not centuries — ahead of his time.”

Hagstrom said he remembered having many of the questions the rooks in the audience probably have — Will this be hard? Will I be able to embrace every challenge? And will it all be worth it in the end?

“My answers to those first two questions are resounding ‘yeses,’” he said. “And as for the third, I’m obviously not at the end of my time here. But the experiences I have had, and the university has offered many, they have been unlike any I could have hoped for.”

After the speakers spoke, the rooks marched in formation onto the Upper Parade Ground, accompanied by the Regimental Color Guard, which also serves as the State of Vermont Color Guard, and drummers from the Regimental Band, the nation’s oldest collegiate marching band, before stopping in front of Jackman Hall.