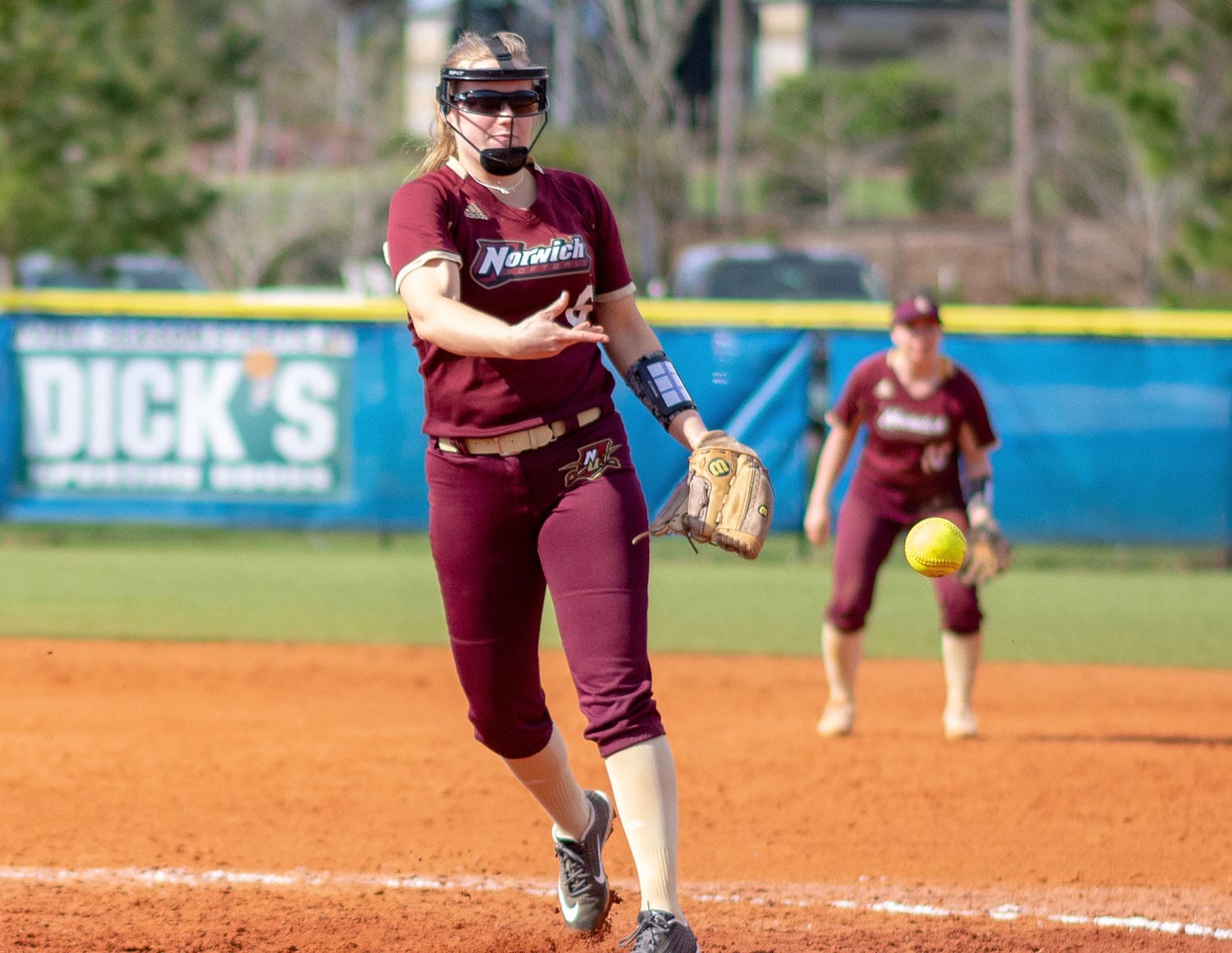 Oliver, who was named the honoree Wednesday, was a three-sport standout for the Cadets on the volleyball, women's basketball and softball teams before graduating this past May. The 3.94 mechanical engineering major with a pre-med track became Norwich’s first student-athlete to win a conference Woman of the Year honor since the award’s inception in 1991.

“I am incredibly honored to be the recipient of the GNAC Woman of the Year and humbled to be among an amazing group of women,” Oliver said. “The Norwich University community supported me in so many ways and allowed me to accomplish everything I could’ve dreamed of and much more.

“My deepest appreciation goes to my coaches, professors and extended Norwich family and friends for their kindness and support over the last four years,” she added. “And, to my amazing parents, thank you for your continuous guidance and unconditional love.”

Oliver is one of 149 conference-level winners out of a record 585 nominees across all three NCAA divisions.

The NCAA Woman of the Year award honors graduating female student-athletes who have distinguished themselves throughout their collegiate careers in academic achievement, athletics excellence, service and leadership.

On top of serving as a tri-captain her senior year, Oliver was a major contributor on all three teams she played in.

Overall in her softball career, she totaled 28 wins, 194 strikeouts and a 3.78 earned run average in the circle. She also collected 120 hits, four home runs, 66 RBIs and a .317 career batting average. Oliver earned GNAC Third Team All-Conference honors as a freshman.

As a senior on the volleyball court, she broke program single-season assists and assists per set records with 754 and 7.94 respectively. She also ranks in the top 10 in program history in career service aces, digs, blocks, sets played, matches played, and assists.

Oliver was also a four-year member of the women's basketball program and ranked second on the team this year, averaging 11.3 points per game and 6.0 rebounds per game.

Oliver was named the Norwich University Senior Female Athlete of the Year in April at the annual Senior Athlete Recognition Dinner. She also received the Looke Award, given to the senior who has distinguished himself/herself athletically and academically and has displayed leadership as a civilian.

“Emily Oliver epitomized the true meaning of a ‘student-athlete,’” Norwich University Director of Athletics Tony Mariano said. “She won nearly every academic and athletic award available to her during her career. Emily was a true leader and someone everyone looked up to and to be the first Norwich female to receive the GNAC Women of the Year Award culminated an outstanding career at Norwich.”

Oliver won the Student Engineer of the Year Award, bestowed annually by the Vermont Society of Engineers, and won the Tau Beta Pi award for the engineering honors society. She also served as a peer tutor and served on the Honor Committee.

Oliver earned CoSIDA Academic All-District honors in both volleyball and softball, becoming the first athlete in Norwich history to achieve that honor in multiple categories in the same academic year. Oliver was the lone representative from the Great Northeast Athletic Conference (GNAC) on this year’s softball Academic All-American teams.

“Emily Oliver has been the definition of a student-athlete during her four-year career at Norwich University,” Norwich University women’s basketball head coach Mark Zacher said. “She has led and starred for three different varsity teams and has excelled in her classroom endeavors. I am sure that I speak for her other two coaches in saying that Emily was unique in that she was not only a very talented athlete, but also one of the smartest that I have ever coached. She was able to quickly grasp, understand, and execute what needed to be done.

“I am very proud to say that I recruited Emily and that I had the pleasure to coach her for four-seasons,” Zacher added. “As a three-star athlete, team captain, and academic All-American, she has left a very unique, amazing, and strong legacy of excellence at Norwich University.”

Oliver will start medical school at the University of Vermont this fall supported by a U.S. Navy scholarship.

Oliver will formally receive the GNAC Woman of the Year award Aug. 7 at the GNAC Hall of Fame dinner at the Hilton Garden Inn Logan Airport in East Boston, Massachusetts.

Conference-level nominations will be forwarded to the NCAA Woman of the Year Selection Committee, which will choose the top 10 honorees in each of the three NCAA divisions. The NCAA will announce the Top 30 honorees on ncaa.org in early September.

From among those 30 candidates, the selection committee determines the top three finalists in each division. The NCAA Committee on Women’s Athletics will select the 2019 NCAA Woman of the Year from the nine finalists.

The 2019 NCAA Woman of the Year will be announced Oct. 20 at an awards dinner in Indianapolis.

READ MORE: Emily Oliver does it all