Here's looking at me: Portrait collection highlights obsession with image 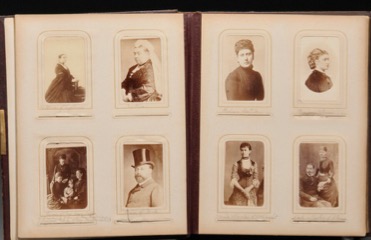 Guy Debord argues in the Society of Spectacle that the tangible world has been replaced by images. For Debord, images derive their power from individuals’ desires for the commodities that appear in visual advertisements. The obsession with visual culture that fascinated Debord led me to consider one specific type of image in 19th century Parisian culture, which Debord and other critics have left unexplored. I begin by discussing the boom in photographic portraiture and looking at collections of portraits. Specifically, I examine texts by Baudelaire and Zola that feature women obsessed with amassing people’s photographs. Like Narcissus, these women cannot look away.

I argue that what pushes these women to gaze endlessly at portraits originates in the spectacularity of the new Paris of the 19th century. In this society of print advertising, newspapers, and posters, the artificial representation of humans, the portrait, ends up replacing real people. In Baudelaire’s “Mademoiselle Bistouri,” an image collector prefers photographs of individuals over the individuals themselves, thereby reducing human beings to the numbered images she catalogues and displays. The poem captures the cyclical behavior of a fetishist consumer-collector described in Belk’s Collecting in a Consumer Society, which is evidenced by her desire to find an object that would complete her collection, her feeling victorious in her endeavor, and her momentary pleasure in this success. Lured into an enthrallment, she no longer relates to real individuals, but rather to a set of photographs. She lives vicariously through these images, projecting sexual fantasies onto these two-dimensional people.

In Zola’s “La Curée,” the protagonist, Renée spends hours examining her own collection of portraits, grabbing a magnifying glass to discover hidden bodily imperfections. I relate this portrait fetishism to broader societal changes: for example, one could consider Haussmann’s architectural transformations, which Zola depicts in this novel, as fostering a tendency toward voyeurism.

This article thus examines the interplay between the somber side of collecting and the power of images to prevail over reality. Building on Debord’s work, I argue that one can see the “power of images” in its nascent form in Baudelaire and Zola, whose literary works explore through language the seductive power of images, which are growing, and which might displace the importance of the text. Ultimately, this article sheds new light on modernity’s immersion in the culture of the portrait. The authors’ representation of their society’s preoccupation with the visual foreshadows our own obsession with the images in an increasingly digital culture, and ultimately, our reliance on social media, such as the “portraits” on Facebook.