This maker space isn’t for wimps 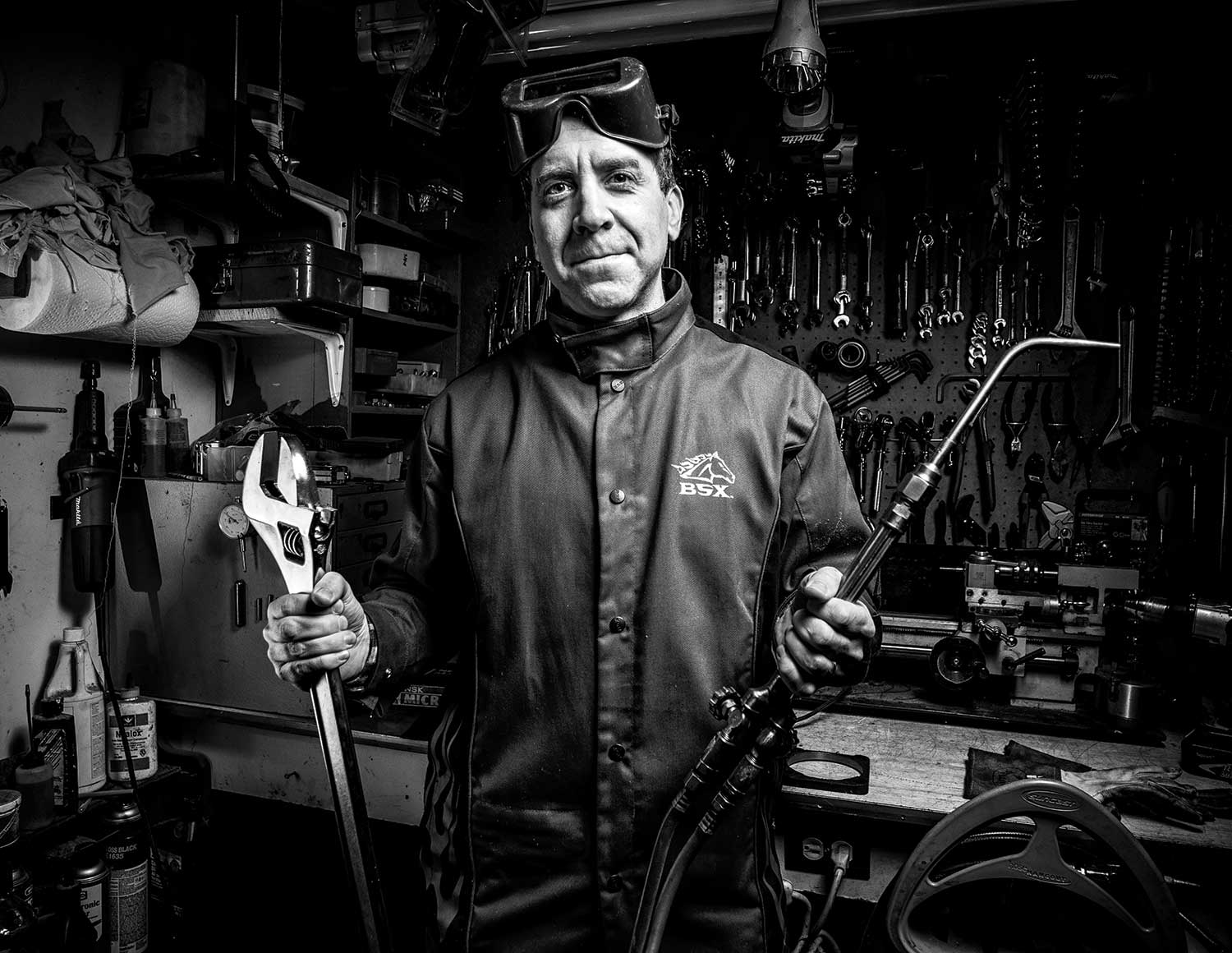 STORY AND PHOTOGRAPH BY SEAN MARKEY
The Norwich Record | Summer 2019

There’s a fine line between obsession and madness. Let Ethan Guth show you around his basement metalworking shop at his North Burlington home some Saturday, and you may realize—having missed it earlier—that you’re suddenly approaching that boundary at 120 mph. The big hint comes when Guth cas-ually mentions the oxyacetylene and TIG (tungsten inert gas) welding torches he uses in his basement. As in, the densely packed workshop you’re standing in with the low wooden ceiling beneath the living room full of small children. But then the Ph.D. points out the vent hood and steel plates he had installed. How mad could he be?

Yet, the maker delirium reveals itself again when you ask Guth what he does with all that stuff. The hundreds upon hundreds of wrenches, screwdrivers, gauges, hammers, drill bits, calipers, power tools, and metalworking accessories that line the walls, fill the drawers, and cover the floor. The metal lathe and two milling machines. The industrial 575-volt air compressor. (Answer: It’s not to inflate his kids’ bike tires in 0.01 seconds. It’s to sandblast.) The second, even larger lathe (c. 1905) crammed in his garage. Guth collects all those tools so that he can...machine parts to fix other tools. And, in theory, with those newly fixed tools, he will machine other parts to fix other tools. Until, at last—perhaps years, if not decades, later—he will have the right gear to once and for all get to what he really wants to work on, which is restoring old motorcycles. And, yes, the lovely old Vespa that his wife spied in the family barn will be first out of the gate. But only after Guth has personally retraced the Journey of Man through the Industrial Age.

It seems ironic that Guth chose such a hard path. He is, after all, a molecular chemist who uses the gene-editing tool known as CRISPR—the ultimate evolutionary shortcut—in his research to engineer radiation-resistant bacteria. But exploring his past explains things a little. Guth grew up on the back of his father’s motorcycle and began riding his own at age 5. (His father was a psychiatrist, his mother a scientist turned technical writer.) Guth says that from his earliest days, he was fascinated by mechanical things and how they worked.

“As soon as I could use my hands, I would be taking something apart,” he says.

By age 15, Guth was racing motorcycles on a New Hampshire circuit and he spent the next decade “heavily invested” in motorcycle culture.

“When you’re racing," he says, "you’re always crashing and rebuilding and fixing and modifying.”

Guth honed his mechanic skills in high school working for a local Harley-Davidson mechanic. He repaired the shop’s broken-down Japanese imports, inheriting 20 of them when the shop closed. (They are still in his family barn.)

Guth sees the connections between his passions for molecular chemistry, motorcycle repair, and machine tools. It’s the quest to build things and to understand how smaller parts and systems fit together and work, whether they’re made of steel or chains of carbon molecules. There are differences, too. The human species is a million years old, Guth observes, and our brains evolved over that span firmly rooted in the natural environment around us. So for Guth, metal-working is as timeless as flintknapping a spear tip.

After spending eight hours of “intangible” work typing on a computer, “I need to get back to the physical world and see a direct effect of my action in the world around me,” he says in his shop. “Like when I’m down here … making a simple part, it just feels good.”