For this team, security is a capital interest 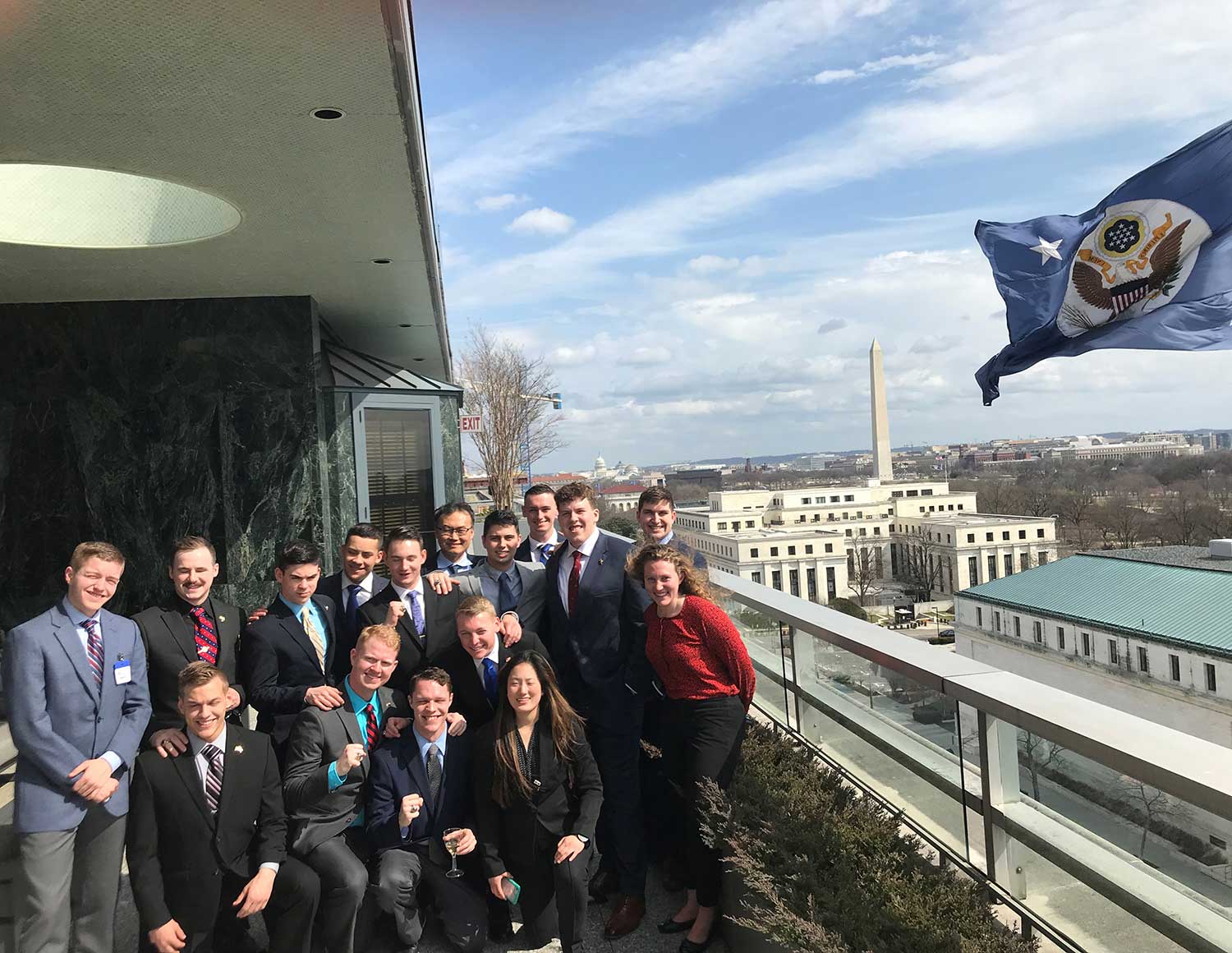 WASHINGTON – While most students left Norwich for warmer weather and relaxation over spring break, Norwich’s 2019 Security Team arrived in Washington, D.C., for an immersion in U.S. foreign and security policy.

The weeklong trip is a supplement to Yangmo Ku’s PO301: U.S. Security Policy. In the weeks leading up to spring break, students learn about agencies, policies and decision-making structures in foreign and security policy. The D.C. Policy Week, organized by Norwich alumni, serves as a unique experience for students to connect academic work to practical application.

Alums Mary Bati M’10 and Tony Johnson ’94 worked tirelessly to connect with Norwich alumni working throughout D.C. to schedule site visits for students. There were clear highlights during the trip, such as attending the swearing-in ceremony of Assistant Secretary of State for Intelligence and Research Ellen McCarty by Secretary of State Mike Pompeo in the State Department’s Diplomatic Reception Room. McCarty even mentioned Norwich during her acceptance speech. Another highlight was spending 45 minutes with Gen. Paul Nakasone, who serves as National Security Agency director and the commander of United States Cyber Command. Although these were exceptional experiences for students, they only scratch the surface of the value this program provides.

On the trip, during a week of long days and intellectual challenges, students engaged with a wide scope of government agencies and alumni. Some alumni had recently graduated; others had concluded their military service, were serving beyond their 20 years, and were mid- to late career. This exposure showed students the range of career possibilities open to them and provided a substantive understanding of federal work.

The week opened March 10, with a small alumni meeting to introduce students and prepare them for the week. Students spent unstructured time with several alumni including a lieutenant general. Afterward, students went to the White House grounds and the Eisenhower Executive Office Building to meet with two Norwich alumni working on the National Security Council.

Students learned the attention to detail required to be an analyst and dissemination practices in the military hierarchy.

On March 11, students spent nearly nine hours at the State Department and heard from 10 speakers covering Europe, the Middle East, Asia and Russia. Students got a crash course on U.S. foreign policy positions and challenges the State Department encounters when conducting diplomacy. After a long day, there was still more on the schedule. Students went to the Brookings Institution, where they spoke for nearly 90 minutes with research fellow Michael O’Hanlon about the threat of Russia.

On March 12, students spent a full day at the National Security Agency, starting with their meeting with Nakasone. The rest of the day gave students insights into U.S. cyberchallenges and strategies. A highlight was visiting the Security Operations Center and Battle Bridge, where real-time intelligence flows to principals and the NSA coordinates threat responses across government. After the NSA visit, students headed to Annapolis, Maryland, for an alumni networking event.

Students returned to the Eisenhower Executive Office Building on March 13 for an unstructured two-hour discussion with the National Security Council’s cyberpolicy director and a regional advisor on Iran. This was one of the more impressive interactions, as students discussed threats ranging from cybersecurity to Venezuela with National Security Council members who brief the president and shape national policy.

Following the NSC visit, students headed to McLean, Virginia, to visit the National Counterterrorism Center and discuss with analysts how the agency responds to threats during times of emergency. Later, students headed to Crystal City, Virginia, for another alumni networking event, where they spent the evening talking with alumni from the public and private sector. Ted Kohn, dean of the College of Liberal Arts, was present to talk with students, learn about their experiences and show support for the extraordinary work alumni are doing in their professions and their commitment to Norwich.

March 14 included trips outside of D.C. The first stop was the U.S. Army Intelligence and Security Command at Fort Belvoir, Virginia, where students got a detailed understanding of the role of Army intelligence. Students learned the attention to detail required to be an analyst and dissemination practices in the military hierarchy. The focus was on enemy ground forces and the multitude of questions analysts should be asking to fully understand something like enemy tanks. Students did not know so many questions could be asked about a single, narrow topic.

The final official site visit was in Vienna, Virginia, at the Terrorist Screening Center. Students toured the facilities and saw displays of some of the most impactful terror attacks on U.S. soil including the Oklahoma City bombing (1995), the underwear bomber (2009), the Boston Marathon bombing (2013), and the Sept. 11, 2001, attacks on the World Trade Center and Pentagon. Several artifacts from 9/11 are on the screening center’s campus to serve as a reminder of the vigilance necessary to protect the homeland.

During the panel discussion, students wrestled with difficult concepts such as balancing security and civil liberties. This tension in finding this balance was especially acute when panelists discussed the terrorist watch list and no-fly list. (We left not knowing who is on the list).

As students left the Terrorist Screening Center, they again walked past the 9/11 memorial and continued to discuss the proper balance between security and civil liberties. One of the most important things students learned during this trip is that discussing the role and constraints of the Constitution are not solely academic exercises. The Constitution, and the structures it establishes, have real implications for principals’ ability to make and execute decisions. In their discussions with people at all levels of government, students could see how Constitutional constraints and conflicts became more apparent the more senior the position and be assured that American’s core values resonate with key decision-makers.

Although the Terrorist Screening Center was the final official visit, it was not the end of the program. Throughout the week, in their precious, and limited, free time, students had been preparing for a crisis decision-making simulation. They split into competing groups and were assigned roles such as White House chief of staff, national security adviser, defense secretary, press secretary and national intelligence director. Throughout the week, the simulation command center, run by Tony Johnson, provided information to the students. On March 15, students entered the simulation with limited knowledge but a better understanding of their roles and powers of the federal government because of previous research and site visits.

For several hours, students worked through a biological crisis, slowly receiving updates. At times, they were denied information from the command center and became frustrated as they worked with incomplete information, which made it especially challenging to brief the press or testify before Congress (roles played by senior State Department officials). The groups varied their approaches, pursuing different methods for collecting information, containing the biological outbreak and responding to institutional conflicts such as federal-state relations (governors were not very accommodating to the federal government). Group dynamics and individual personalities played a major role as students settled into their positions and defined the chain of command.

Both groups performed well under pressure and responded as a team to mistakes and misinterpretations of their actions. They quickly realized that even though they are making critical decisions and occupy the role of the government’s most senior decision-makers, many things remain beyond their control.

The D.C. Policy Week is a unique experience that spans multiple generations of Norwich students present and past, some senior enough to ask the NSA director to visit students as a personal favor (it was the first time he met with students since assuming his role). The alumni the students met all understood the value of working hard, educating yourself and serving others. This was one of several important takeaways from the week.

First, students learned it takes more than smarts to reach senior decision-making positions. Everyone students spoke with was smart; all held advanced degrees and had complete command over their substantive area of interest. However, all understood the value of interpersonal relationships and the importance of acting genuinely and without self-motivations toward others.

Third, they learned how threats to the United States are real and how a large group of men and women work silently to protect American interests, often with incomplete information under significant time pressures. The challenges the United States face are unique and its ability to respond is unique, both because it has the means to act, but also because of the constraints placed on action by the Constitution. The role of the founding documents and guiding values of the country were never lost on these students; they recognized the necessary balance between security and the protection of individual rights and liberties.

This program exemplifies the students and principles Norwich values. Each student brought a unique perspective, creating a diverse outlook on the world. Are all exceptionally bright students who value education and all have an intrinsic interest in learning and expanding their understanding of the world. The students’ exchange of ideas, level of discourse and empathy toward others is inspiring and provides hope for the future.

Importantly, this program demonstrates the importance of experiential learning. Classroom instruction is important because it teaches students the importance of quality research and prepares them to conduct themselves with confidence in debates. However, some knowledge and skills and experiences cannot occur in class. Norwich has figured this out, which is why there is continued support on campus from the College of Liberal Arts and the Peace and War Center. It’s also why alumni go to exhaustive lengths to organize the program.