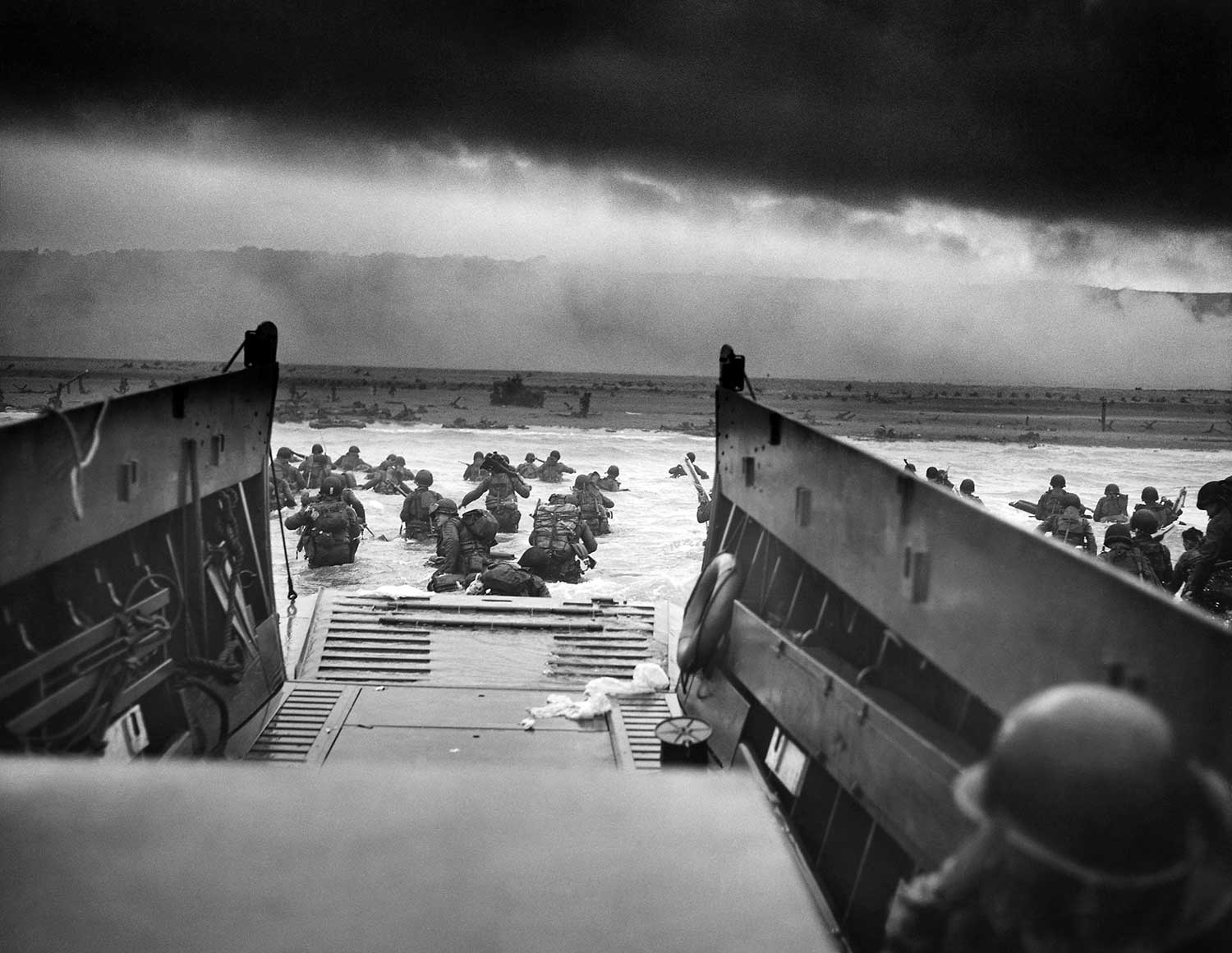 WWII veteran Robert F. Crecco ’47 landed at Omaha Beach after the first assault. Now 94, the Norwich alumnus recalls in a 2013 interview that experience and how he spent the war.

Iwas drafted while attending Norwich as a freshman. There were about 179 of us freshmen at the time. The school was basically taken over by the Air Corps. There were 1,200 Air Force cadets, and the school revolved around them. It’s surprising that Norwich even had a freshman class—all the others had left; the juniors and seniors were immediately inducted into the service, and the sophomores were being decimated by drafting. All the dormitories were taken up by the Air Corps, so we stayed in the fraternity houses. I was the oldest in the class, so I was the first to get drafted.

I was inducted in Montpelier and then sent to Fort Devens for pulmonary activities and then Fort McClellan in Alabama for Basic Training. They told me at Fort Devens that I was to be put in an Army specialized training program. I was scheduled to go to Texas A&M for that. But three months after Basic, conditions changed with the war plans and so forth, and they decided to cancel all Army specialized training programs. Since we were being trained as infantrymen, we were to go back to that. We shipped out for England about a month later.

We were on a troop ship. It was an Australian meat refrigerator ship they used to bring mutton from Australia to England. It was pretty bad. It was not a fun ship. We were packed in there like sardines, and the smell below deck wasn’t too great. We came in at Bristol, England, and went into camp near a place called Leamington. We were in tents, four men to a tent. All we did was march and march and march up and down all those winding roads in England.

After training for what seemed like a long time, we finally get word to pack up and get on these trucks. And lo and behold, we’re in Southampton. They loaded us on ships. The initial attack on the Continent had begun. We were on the ship overnight and then finally we sailed the next day. Late on June the 7th, we landed on Omaha Beach.

Well, it was still a mess. The fighting had proceeded up off the cliff, and they were going inland. The beach was littered with all kinds of equipment. There were still some dead bodies on the beach. They had been lined up. I guess they were in the process of taking them off. After we got off the beach, we went up on the top of the cliffs. Our forces had already pushed a couple of miles inland. Rangers had cleared the cliffs the previous day, even though they sustained quite heavy casualties. We didn’t know what was going on. All we knew was that we had to get off the landing craft. We could hear the noise up ahead, the shells and everything. They were still bombarding the area from the battleships and the cruisers. They were still shelling way inland. They kept us there for a while, and then they told us to advance. The lead troops had pushed way inland. So we weren’t in the front line at that time, we were in the backup. I was with the 2nd Infantry Division. About ten days later, we were near Saint-Lô surrounded by small villages.

We were near a village. I was on a patrol, and I got wounded by a mortar shell. It was at night. That whole country there is full of hedgerows. You’d have these dirt roads going between the hedgerows and then across the hedge. Or, on the near side of the hedgerow would be a little pasture and then on the other side road would be another hedgerow and then a pasture and the hedgerows all the way around. That’s how the country was. Normandy was full of hedgerows, and it was very difficult fighting in those areas. On patrol at night, you’d go over a hedgerow, and then you’d sit there and see what the opposition, the Germans, were going to do. Whether they were putting out patrols.

They must have seen us, because they sent over three mortar shells. There were three of us. Our sergeant got killed. I was wounded. The other fellow, he didn’t get hit at all. So we dragged our sergeant back to our lines. I got wounded in the arm and also my foot, so I was evacuated. At that time, they were evacuating everybody to England. We had control of some airfields. So we were able to get these ambulance planes there. They’d load the wounded into one of those. I got evacuated to a general hospital near Oxford.

I was there for about two months, because I couldn’t walk. And then my wounds got infected. They reclassified me as limited service. While we were in England, we had it pretty good. We got to visit a lot of places, and see a lot of those Shakespearian plays. On reassignment, they sent me back to Paris. I was in a reassignment depot. We got some leaves to Paris. It was all right, but I was really not into it. I was still pretty young. Some of these guys were hep for getting drunk and then picking up [prostitutes]. I wasn’t into that. I didn’t enjoy Paris that much. But I got reassigned. Since I was on limited duty, I wasn’t going to a front-line outfit. I ended up in 90th Division of 537th Headquarters Battery. It was an automatic weapons battery. I was on headquarters duty. They were looking around to put me to do something. All of a sudden, this warrant officer in charge, he said, “You went to college, didn’t you?” And I said yes. “Well, we’re going to have you do the morning report.” It was a nothing job. Which was fine by me, because it kept me out of the front lines. So that’s how I survived the war.

When the war in Europe ended, we got sent up to Brussels, where we stayed in tents for a few weeks while on occupation duty. In Stars and Stripes one day, we read that the atomic bomb had been dropped on Japan. Then, the next day another bomb had been dropped. At the time, we were about to be retrained for a unit that was going over to the Pacific. So the dropping of the bomb, we didn’t understand the implications of this until we saw, reading in Stars and Stripes, that the war was coming to a close in the Pacific.

Editor’s note: This reflection—excerpted and lightly edited for length and clarity—is based on Robert Crecco’s 2013 interview with Jennifer Payne for the Sullivan Museum and History Center’s Oral History Project.