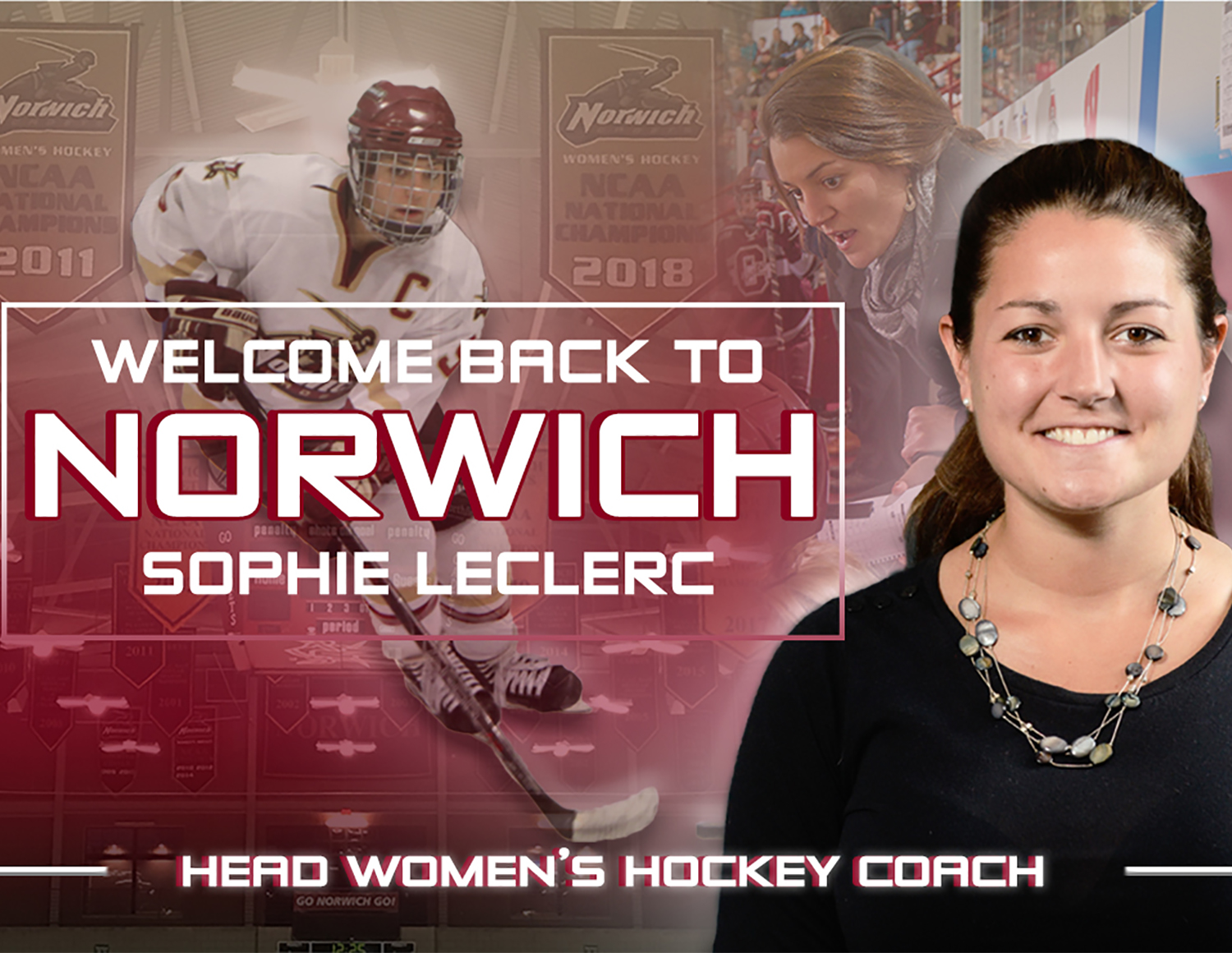 Norwich University Director of Athletics Tony Mariano said May 17, 2019, that Sophie Leclerc ’10 will be returning to her alma mater as the second head coach in Norwich University women’s ice hockey program history.

NORTHFIELD, Vt. — The Barre, Vermont, native returns to Norwich and Central Vermont after spending four years as an assistant coach at Division I Colgate University, helping lead the Raider women’s hockey program to unprecedented levels of success during her time there. She replaces Mark Bolding ’95, who left to become the head women’s hockey coach at Yale University in April.

“I am pleased to announce that Sophie Leclerc, former All-American women's hockey standout for Norwich University will become the second women's ice hockey coach in our program’s rich history,” Mariano said. “Sophie had an outstanding playing career and her experience as an assistant coach at Norwich and Colgate University has prepared her for our head coaching position. I am excited for the future of Norwich women's hockey under Sophie's direction and I look forward to many successful years ahead for women's hockey at Norwich.”

Leclerc helped head coach Greg Fargo lead a dramatic program turnaround at Colgate with a 101-36-1 record in their four seasons together, including making the program’s first appearance in the NCAA Division I National Championship game in 2017-18. Before Leclerc’s arrived at Colgate, the Raiders had never had a 20-win season and their best win total in the previous five seasons was 11.

“I am humbled and feel extremely fortunate to accept the position of head women's hockey coach at my alma mater,” Leclerc said. “Together, our staff and players will continue to embrace the overall mission of Norwich and represent our institution, program and community, on and off the ice, with purpose, enthusiasm, and excellence.”

Leclerc also played an instrumental role in bringing in the nation's No. 1-ranked recruiting class (neutralzone.net) for the 2019-20 season.

Leclerc was a four-year standout at Norwich, helping build the program from the ground up as a player on the inaugural varsity team in 2007-08. She capped her sensational playing career by guiding NU to its first national championship with a 5-2 victory over RIT in 2011.

Leclerc still ranks as the all-time program assists leader and is ranked second in nearly every other offensive category, including career points. She scored 72 goals (third) and tallied 91 assists for 163 points in 112 career games played.

After graduation, she spent one season as the head girls' ice hockey coach at Kimball Union Academy in Meriden, New Hampshire, Leclerc returned to Norwich to serve as the full-time assistant coach under Bolding in 2013-14 and 2014-15.

In two seasons, she helped the Cadets to back-to-back NCAA tournament appearances, including an NCAA Division III national runner-up finish in 2013-14. Norwich posted a 49-10-3 mark in Leclerc’s tenure as an assistant coach.

“I cannot begin to thank Mark Bolding and Greg Fargo enough for their immeasurable support, mentorship and lessons shared over the past 10 years,” Leclerc said. “They have without a doubt created and fostered the love I have for this game and the relentless desire to share it with others through coaching.”

Leclerc graduated from Norwich with a Bachelor in Physical Education degree and then also earned her Master in Organizational Leadership degree in 2012 from Norwich.

“As a former player and coach here, I don't think I ever stopped thinking about Norwich,” Leclerc said. “I love this place and the memories it created for me. I have always dreamed of being the head coach here.”

Norwich won its ninth NEHC Tournament title and eighth NEHC regular season title in 2018-19 and qualified for the NCAA Tournament for the 10th time in the program's 12-year history. The Cadets finished with a 21-6-2 record, falling 3-1 to Williams College in the NCAA Tournament's first round.

In Bolding’s 12 seasons, he founded a new varsity women’s program and helped build it into the perennial NCAA Division III perennial power it has become. He compiled a 266-68-22 record and guided the Cadets to two national championships and seven Frozen Four appearances.

Media Contact:
Derek Dunning
Director of Athletic Communications
1 (802) 485-2902
This email address is being protected from spambots. You need JavaScript enabled to view it.