It’s the Fishing, Not the Fish 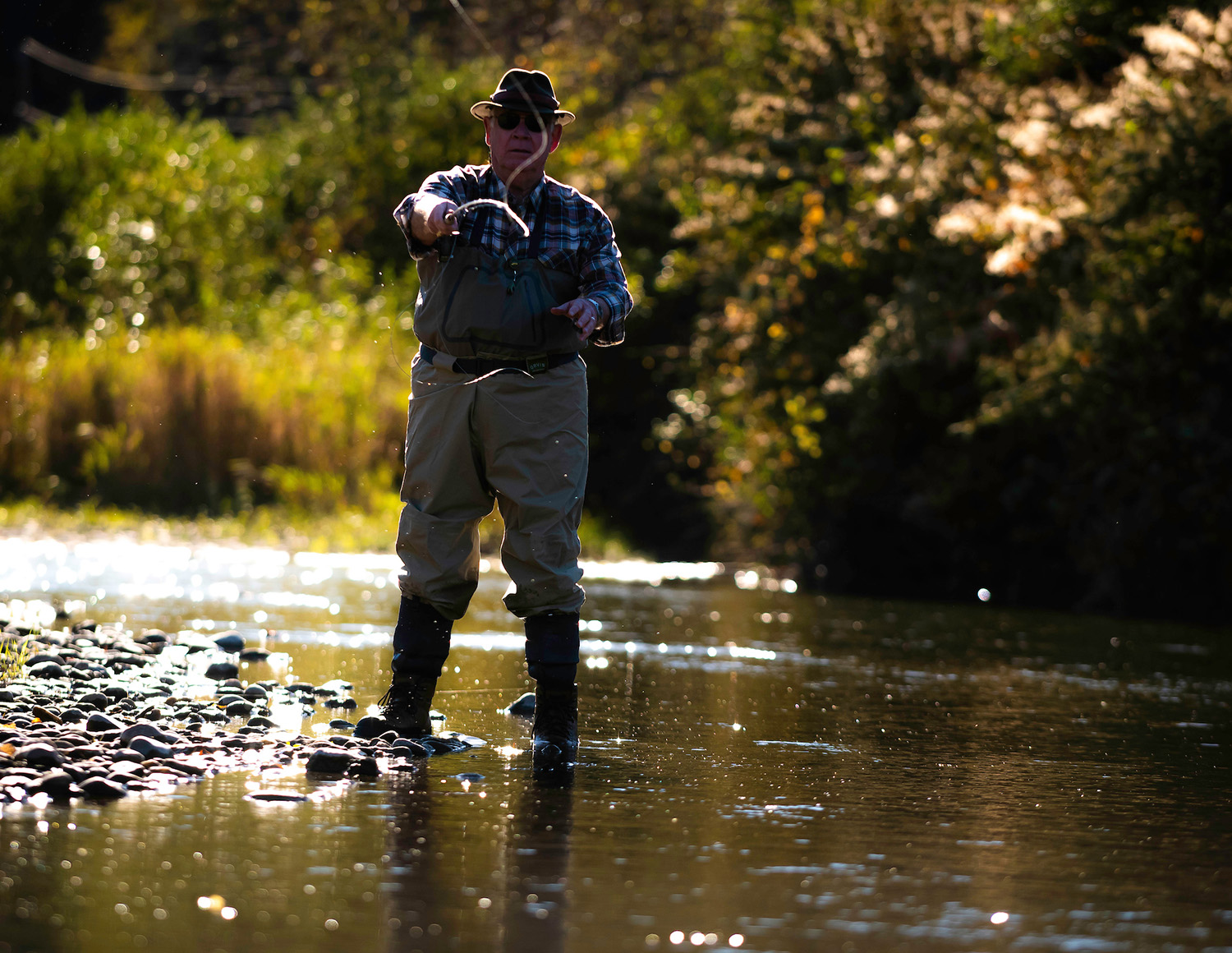 The Order of Ancient Fishermen and a 55-Year Friendship

In late October the Dog River in Northfield is low and chilly. Wading through its waters, stopping periodi-cally to greet Norwich students cutting from the rugby pitch to campus, Yank Shugg ’67 is teaching me to roll cast.

Shugg is a founding member of the Order of Ancient Fishermen along with his classmate and ever-lasting fishing buddy Barry Meinerth ’67. Better known by their wry acronym, the “OAFs,” the loose-knit group of Norwich friends and associated pals periodically travels North America to fly-fish for cutthroat trout, arctic char, and Atlantic salmon. Rarely do they visit the same locale twice.

The OAFs founded their club 30 years ago at the Ancient Mariner bar and restaurant in Richfield, Conn. “We thought it was hilarious,” Meinerth recalls. “We were 40 years old, and we’re naming ourselves the Order of Ancient Fisherman.”

Roommates at Norwich, Shugg and Meinerth lost touch after graduation. But by chance, they both moved to Ridgefield after military service and reconnected. There, Shugg taught Meinerth to fly-fish. It marked the start of more than three decades of fishing-minded travels around North America, often accompanied by Norwich “family” members Ed Tracy, Duane Martin ’67, John Manchester ’64, Bob Plumb, and John Riggs ’67.

“It’s not the fish, it’s the fishing,” Shugg says, paraphrasing Arnold Gingrich’s timeless insight from The Well-Tempered Angler. It’s a phrase Shugg will repeat several times during our afternoon on the Dog River. And again, later, when we visit the OAFs Clubhouse on the Mettowee River, both conveniently accessible from Meinerth’s alpaca farm in Pawlet, Vt.

It’s not the fish. It’s the fishing. Shugg sees parallels in the Norwich experience. It’s the getting there that matters as much or more than the outcome, something that Norwich teaches its students every day. Rooks spend months squaring corners to instill the lesson that they can’t cut them later in life. Norwich students earn a degree, but it’s perhaps the experience and challenge of doing so together that changes them the most, creating a shared experience and bond with fellow alumni.

And that seems to apply as well to OAF fishing trips, albeit on a gentler scale. It’s the experience of fishing together, the time spent playing cards, telling stories, riding on horseback into the mountains to find pristine fishing spots, Shugg says. And of course, the friends along the way. “There’s nobody I enjoy fishing with more than Barry,” he says.

Misadventure or mischief are not unknown on OAF excursions.

While fishing the Miramichi River in New Brunswick, Canada, Shugg dropped his fly rod into the fast-moving water. Guides assured him that it might be salvageable—in late August, when the river level dropped. Writing it off as a lost cause, Shugg returned to camp. But the following afternoon, Meinerth tangled his own hook onto the fly of Shugg’s sunken rod, purely by accident, and reeled it in. “It [was] amazing,” Shugg says, laughing at the memory. “And I’ve been paying for it ever since.”

Back on the Dog River, I try my luck at the roll cast Shugg is so patiently trying to teach me. It takes a deft touch, the right sweep of the arm and flick of the wrist. It’s hard to master. So instead I watch Yank. He floats his line with a sinuous, almost magical grace over the river. The fly lights on its surface, where the river's ripples and sun meet like two old friends.