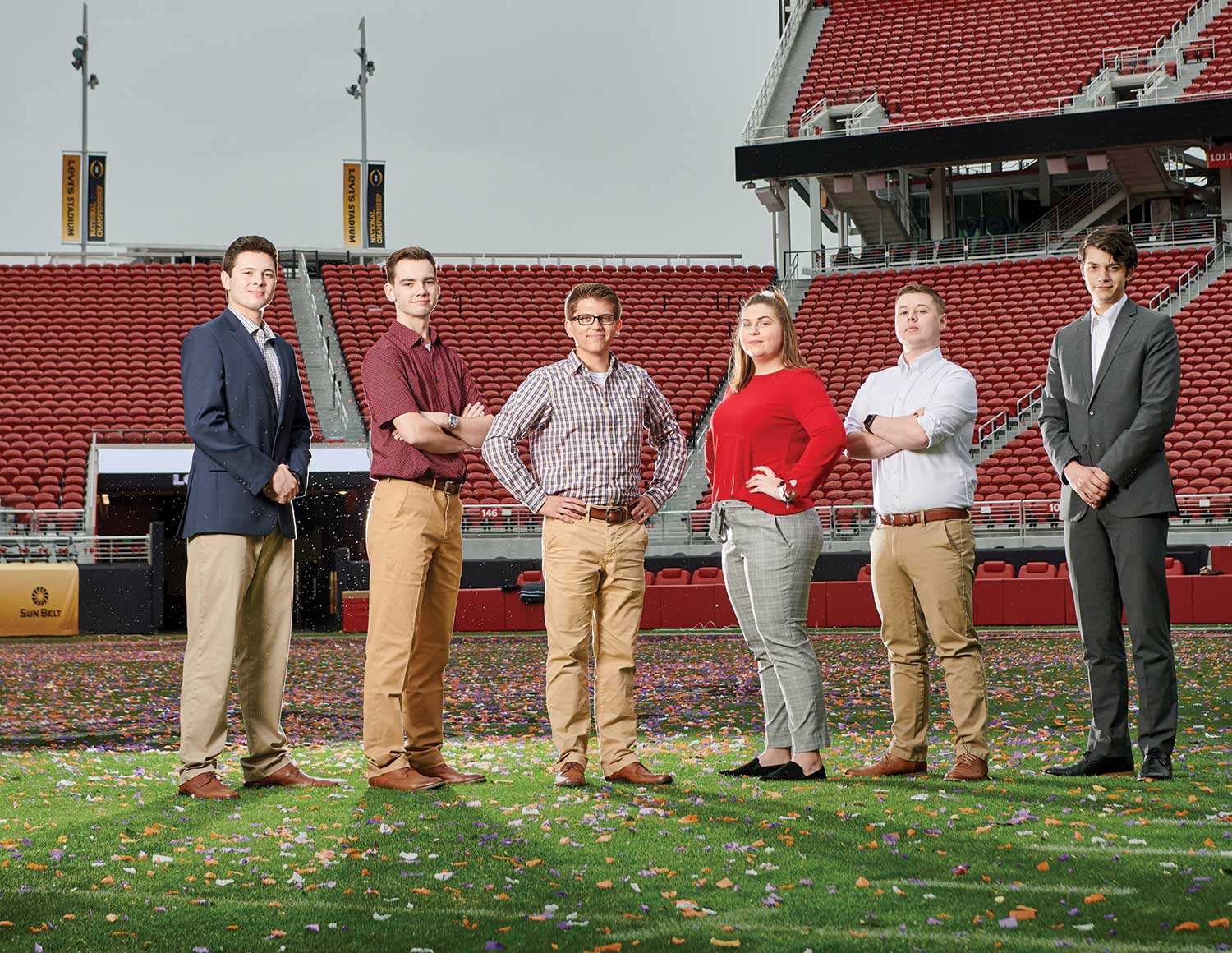 In January, as Clemson and Alabama squared off for the College Football Playoff National Championship at Levi’s® Stadium in Santa Clara, Calif., another top college defensive lineup was hard at work in the Silicon Valley stadium.

But rather than looking to block a lock/sweep post at the next snap, these half-dozen Norwich cybersecurity majors were helping stadium staff and the Santa Clara Police Department monitor network security for the stadium, not to mention its 65,000 smartphone-carrying fans.

Ferry, a senior commuter student from Barre, Vt., who will work for Honeywell Aerospace as a cybersecurity architect after graduation, says the biggest challenge wasn’t the event itself but the weeks leading up to it. “Trying to find [and] develop a solution that we could implement at the stadium.”

“Levi’s® Stadium is one of the most technologically advanced in the world,” says teammate Ryan Jasmann, a junior computer security and information assurance major from Herndon, Va. “We had to build from the ground up what we were going to do.”

The effort took months. Research included a site visit in early November, when students met with stadium staff during a National Football League matchup between the New York Giants and the San Francisco 49ers.

The team exhaustively evaluated an open-source cybersecurity software platform (Security Onion) put forward by Silowash. They agreed that it was the right solution. Next, the team added data visualization software and built and configured supporting hardware, from high-speed servers to network data probes.

Jasmann says the opportunity to apply the skills he learned in the classroom to a real-world scenario “at a stadium like Levi’s is incredible.”

Intelligence Sergeant Tony Parker of the Santa Clara Police Department has worked large events at Levi’s Stadium since it opened in 2014. He says the NU cyberteam brought “next level” skills not found in his own department.

The 28-year police veteran adds that the students’ professionalism was notable, adding that they were “absolutely amazing” to work with. “They came with the best attitude possible…[and]…they were extremely competent.”

For his part, Jacbo Ratajczak ’20, a CSIA major from Holland, New York, says one big takeaway from the experience was seeing how cybersecurity operations work in a large-scale environment. “I was pleasantly surprised at how dynamic and fast-paced the job was,” he says. “There was always something to do.”

At the stadium, the NU cyber team took up a side project. Using two low-powered, hand-held computers with antennae, they “sniffed” the airwaves for Wi-Fi and Bluetooth radio signals to detect drone activity. As an experiment, Alessi helped write a Python script designed to identify the Media Access Control addresses of nearby drone operator hardware. The team collected data for later analysis to see if it worked.

NU’s appearance at Levi’s Stadium marks the second time in three years that the cybersecurity program has collaborated with stadium officials and local law enforcement to monitor network security there. The last time was in 2016, during the NFL matchup between the Carolina Panthers and the Denver Broncos at Super Bowl 50—a connection started by Norwich alum Ray Carreira ’96.

“It’s a great partnership,” Parker, the Santa Clara Police Department sergeant, says. “Not only do we get something from them, but we’d like to think, hopefully, they get something from us as well. You know, coming out here and being able to have this real-life experience.”

Jasmann, a junior, who first visited the Norwich campus in high school for an NSA-sponsored GenCyber summer camp, says he was blown away by the number of people it takes to run a national sports championship. “It’s incredible to be able to see how much work goes into doing an event that lasts two hours and most of the country only sees on TV.”

Silowash, who teaches digital forensics and cybersecurity courses in the online master’s program at Norwich, says the student team worked like champions. “My favorite part,” he says, “[was] pointing them in a direction and them letting them run with it. They put in some long, tiring days.

“They did a lot of reading, and they learned the software like the back of their hand…I was very impressed.”