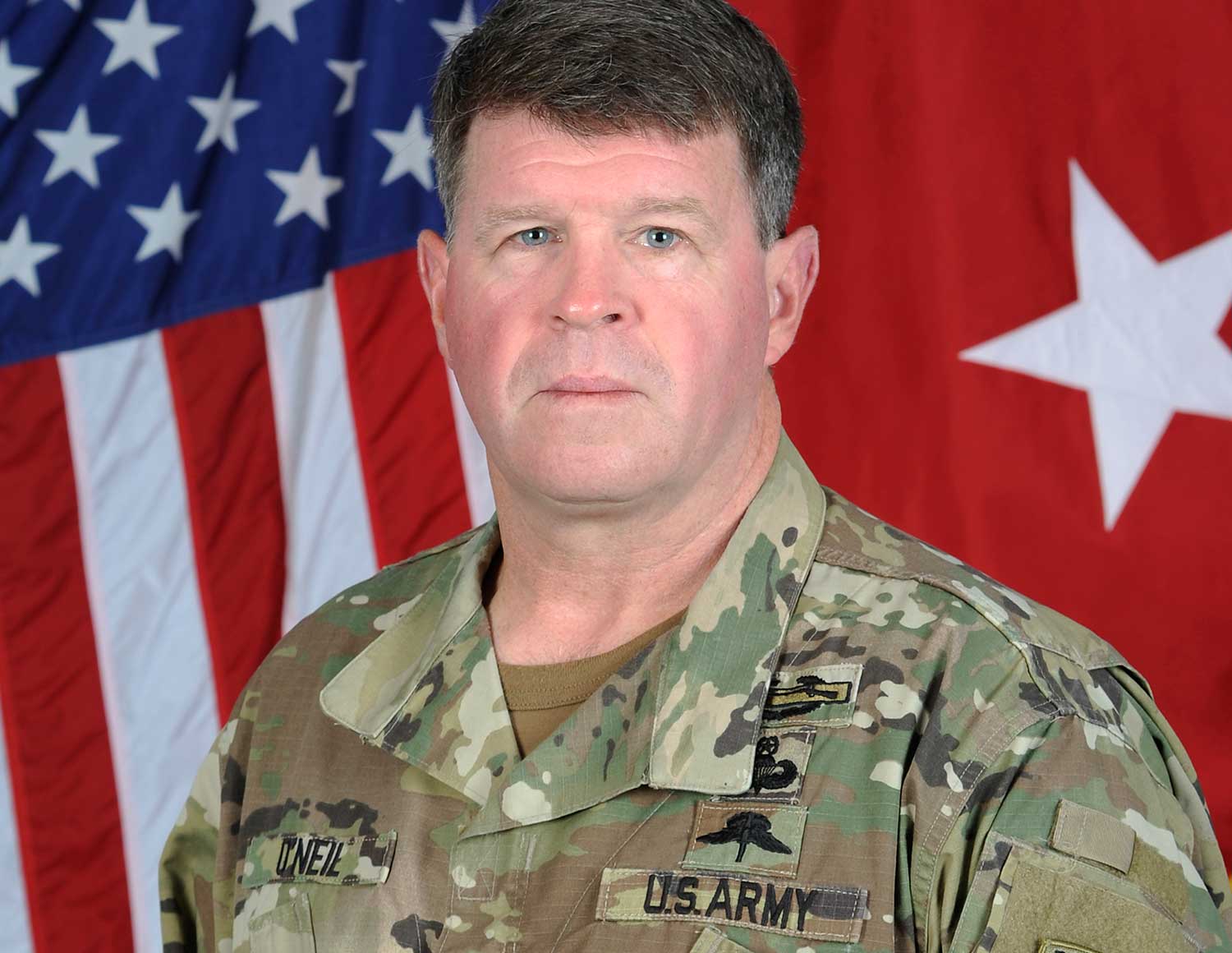 NORTHFIELD, Vt. — Norwich University’s graduating future officers will hear remarks from a fellow alum at this spring’s joint services commissioning ceremony. U.S. Army Maj. Gen. Mark J. O’Neil ’86 returns to the Norwich campus to speak to ROTC commissioning officers during a formal ceremony to mark the occasion at 9 a.m. May 12 in Shapiro Fieldhouse.

O’Neil serves as the commanding general, U.S. Army Alaska, of which he assumed command in 2017. He graduated from Norwich University in 1986 earning his commission as an infantry officer from Norwich University’s Reserve Officer Training Corps (ROTC). He began his career as a platoon leader, company executive officer and scout platoon leader with the 1st Battalion, 5th Cavalry Regiment, 1st Cavalry Division, Fort Hood, Texas.

Throughout his career, O’Neil has served in key staff and command positions for both Army units and Special Operations organizations. He served as a battalion logistics officer and later rifle company commander with the 1st Battalion, 27th Infantry Regiment, 25th Infantry Division, Schofield Barracks, Hawaii. In April 1994, he joined the 3rd Battalion, 75th Ranger Regiment, Fort Benning, Georgia, where he served as a battalion training officer, assistant operations officer, and rifle company commander, and later as a liaison/plans officer with Headquarters and Headquarters Company, 75th Ranger Regiment.

In 1998, O’Neil joined a special operations organization where he served in key leadership positions from troop commander, selection and training commander, squadron commander, deputy commander for operations, and finally as commander of the organization from July 2009 to July 2011. He also completed an assignment as chief of the Current Operations Division for the Joint Special Operations Command.

From August 2011 to December 2012, O’Neil was executive officer to the chief of staff, U.S. Army. He then transitioned to Fort Drum, New York, to serve as deputy commanding general, operations for 10th Mountain Division. In March 2015, he became the deputy commanding general, training for the Combined Arms Center at Fort Leavenworth, Kansas. From May 2016 to June 2017, he was U.S. Army, Pacific chief of staff.

O’Neil holds a Bachelor of Science in physical education from Norwich University and a Master’s of Military Arts and Science from the United States Army Command and General Staff College at Fort Leavenworth, Kansas.

The event, which begins at 9 a.m. in Shapiro Fieldhouse, is part of Norwich University’s Commencement Weekend and is open to the public.