WHY IS PAUL BREMER SO WORRIED? 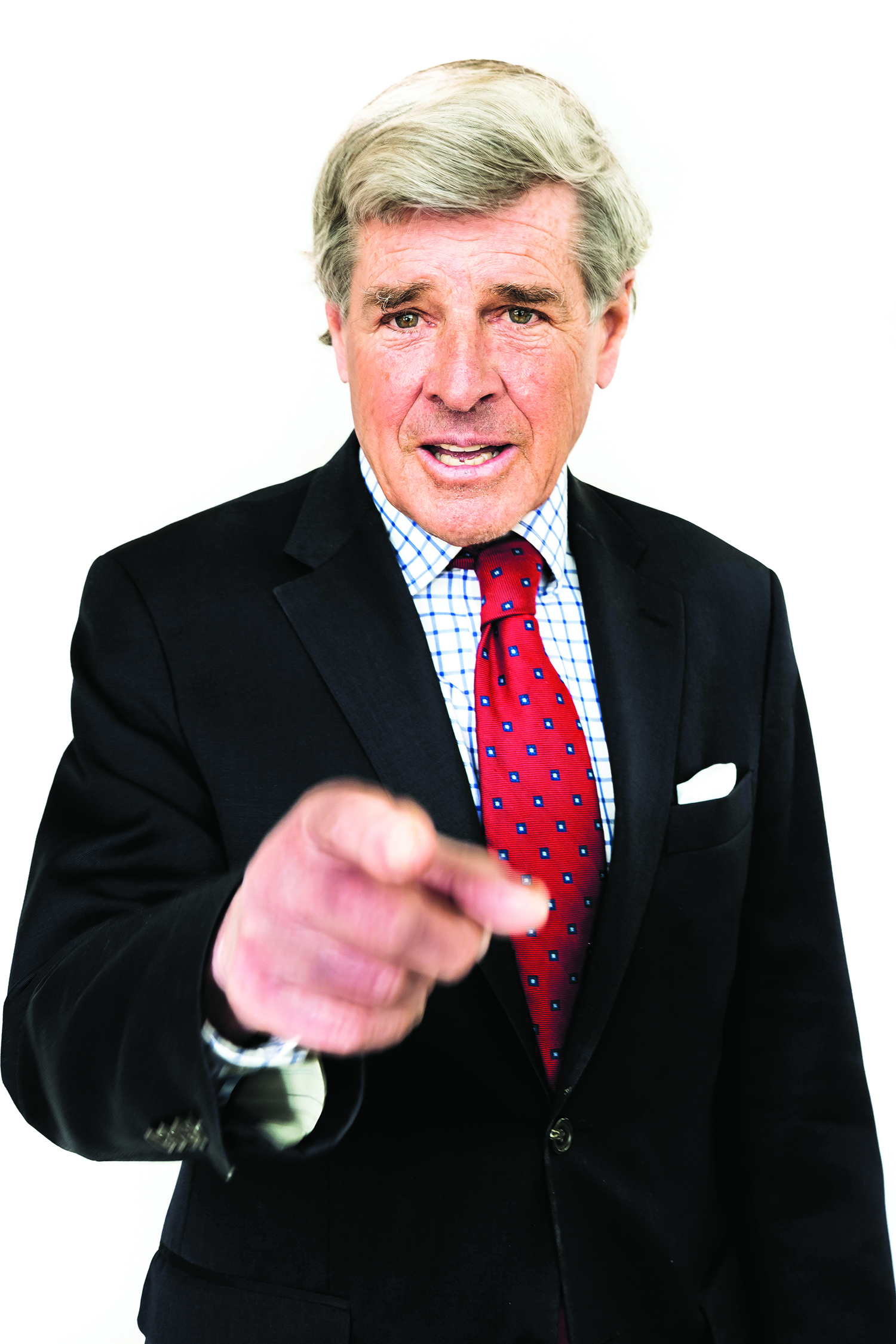 Most people know Paul Bremer as the presidential envoy appointed by George W. Bush in 2003 to lead the reconstruction of Iraq after U.S.-led coalition forces invaded the country and toppled dictator Saddam Hussein. Even today, the images of Bremer touring wreckage in a suit and combat boots still linger. Less well known, perhaps, is the diplomat’s long career as a foreign service officer, which began in Afghanistan in the 1960s and included posts in Africa, Europe, and Washington, where he served Henry Kissinger at the State Department and later in the private sector. In 1999, Bremer chaired the National Commission on Terrorism. His office was located at the World Trade Center when the 9/11 attacks occurred. Bremer later served on a National Academy of Sciences committee on science, technology, and counter-terrorism.

In February, the statesman sat down with College of Liberal Arts Dean Edward Kohn, PhD—himself a distinguished historian, author, and presidential scholar—to share his perspective and insight on some of the world’s most pressing security issues.

KOHN: President Trump recently suspended participation in the INF Treaty with Russia. He has been or is in the process of pulling out of the Iran nuclear deal, the Paris Agreement on climate, the Trans-Pacific Partnership, the UN Human Rights Council, and UNESCO. He’s threatened to pull out of NATO and the WTO. What is going on?

BREMER: Well, I’m concerned about the general effect of all of these things. Some of them I agree with. I agree with pulling out of the INF Treaty. I was involved in the efforts to get Pershing missiles into Europe 30 years ago. The Russians are clearly violating [the treaty]. If an arms control agreement is being disobeyed by one party—and this was first decided by the Obama administration [not] something Mr. Trump did on his own—then I think it’s time to pull out. So I agree with that. I agree with pulling out of the Paris Climate [Agreement], because I don’t think it effectively was going to do much except cost us a lot of money. On the other hand, there is a pattern here in the first two years of this administration that is concerning.

When the leading force for a liberal world order—liberal in the European sense of the word, and that has been the United States for the last 70 years—starts to run on its own and become an America-first policy, it has potentially very unsettling and dangerous implications for the world. So, I am concerned. Even though I agree with several of the points that the president has made. I think we’re in a very dangerous situation.

I’ve been struck by the transactional language that the president uses. “We need a good relationship with Saudi Arabia because of oil prices. Because they buy so much from us.” Canceling joint military operations with South Korea was framed the same way: “We’ll save a lot of money.” As a historian, I think back to the 1920s and concerns about reparations and the Dawes Plan. In a transactional fiduciary framework for looking at foreign policy, it’s all seemingly about the economics. Is this an adequate framework to look at Americas’ global interests?

No, it’s not. A transactional-based foreign policy eventually becomes isolationist when you have a series of one-offs. Are the Koreans going to pay 50% more for the troops or—as they now offer—only 20% more for the troops? In any case, the troops are there for American interests. We’re not there for just South Korean interests. Just as our troops have been in Europe for 70 years. Not because we’re helping the Germans or the French. Our troops are there to protect American national interests.

So what you get with a transactional approach to foreign policy, a series of one-off deals, is a foreign policy that is not rooted in any strategy. This is a very unsettling thing to me as a student of American foreign policy. I think it’s the wrong approach. Obviously, the Europeans, as the president had said, should be paying more for our troops that are in Europe. Fair enough. This is not new. I spent years in Europe trying to persuade Europeans to spend more to support us. He’s right about that. But it’s not purely economic. Our forces are not there to serve only the host countries. They’re there because American interests are there.

Moving to ISIS and Syria, is it time for the United States to withdraw from Syria? And is it right to be telegraphing our plans to withdraw?

I’m always a bit uneasy about troop withdrawals, unless they’re carefully planned. I mean it’s taught in any military academy, and I’m sure here—retreat is the most difficult military maneuver there is.

In this case of Syria, I think starting with the Obama administration and continued with Trump, there’s been a lot of confusion about our policy. Obama made the mistake of drawing a red line in the sand about the use of chemical weapons and then did nothing. No president should ever bluff publicly. You can do some bluffing across the table in a negotiation. But you don’t bluff publicly if you’re the president.

So, our policy’s been on again, off again, why were we in Syria and so forth. Certainly, the fundamental threat to American interests continues to be ISIS, and that is in Syria. And the repatriation of potential ISIS back to the United States to conduct attacks here, there’s a legitimate American interest in making that less likely. I don’t think it’s wise to telegraph the withdrawal and certainly not wise to, as the president did, announce it without the support of his foreign policy cabinet, if you will.

So what’s left to do is to finish the job with ISIS in its pockets. I could make an argument that then we should still have troops there in order to support our Kurdish allies in Syria, and in order to provide at least some kind of a balance to the overwhelming Russian and Iranian influence that will be left if we entirely leave.

Right now, we are in Afghanistan negotiating directly with the Taliban. Part of the criteria was that the Afghanistan government is not at the table. What does this do to the credibility of the Afghani government? Is there an alternative?

Well, what we’re seeing in Afghanistan in terms of the negotiations is exactly what happened in Vietnam. We’re effectively negotiating behind the back of the, until now, legitimate allied government. I can understand why President Ghani is not very happy about this thing.

I think it’s a mistake to pull out of Afghanistan at this time. Again, I think this was announced without due consideration of the consequences. Because even if they can pull together some kind of a deal and even if you can swallow that we’ll basically betraying our ally in Kabul, the legitimate government, it’s a very big risk to have the Taliban take over again and tell us, “Well, don’t worry about it. We won’t let Al-Qaeda get a base here again.” Well, why do we believe that or ISIS? ISIS is effectively—I call it Al-Qaeda, Version 4. I think it’s a mistake. If we follow through with that, sooner or later, we will again find ourselves subject to threats, if not attacks, from very bad people based in Afghanistan.

In Iraq, I think we still have about 5,000 American troops there. Is that too many? Too little? Why is the United States in Iraq 15 years after “Mission Accomplished?”

Well, we’re there for a very good reason, which is to help train the Iraqi counterterrorist forces, which are the most organized and well trained of the Iraqi forces. They alone can counter-balance the Iranian Popular Mobilization Units, the PMUs, which total, I think, now 150,000, who are in theory under central command but in fact are at least close to the Iranians, let’s say in terms of their actual command structure.

So I think it’s very important that those 5,000 Americans stay there. And stay there not primarily as the president said, “To keep an eye on Iran,” which offends the Iraqis. It pushes them towards the Iranians. It has the exact opposite effect, as the president of Iraq said yesterday. So I think they should stay there, and they should stay there to help the Iraqis also finish the job against ISIS. There are still ISIS pockets, particularly out in the west in Anbar Province, bordering on Syria. And they need to be dealt with.

Would you support more troops to finish this job?

If the Secretary of Defense and the Joint Chief said we need more troops, of course I would support it. But I don’t know whether they do or not.

Let’s close with a Norwich question: With challenges facing America and the world, what role do you see for a unique institution, a senior military college like Norwich University, and its students, a couple of whom you met at breakfast this morning?

I think by giving young Americans a perspective on service and leadership, in the sciences, including military sciences, but also in the liberal arts and history, and of America and other places, this creates a corps of people who can go out and serve their country in many different ways, at many different levels. It’s a wonderful institution.