A Taste of Culture in Québec City 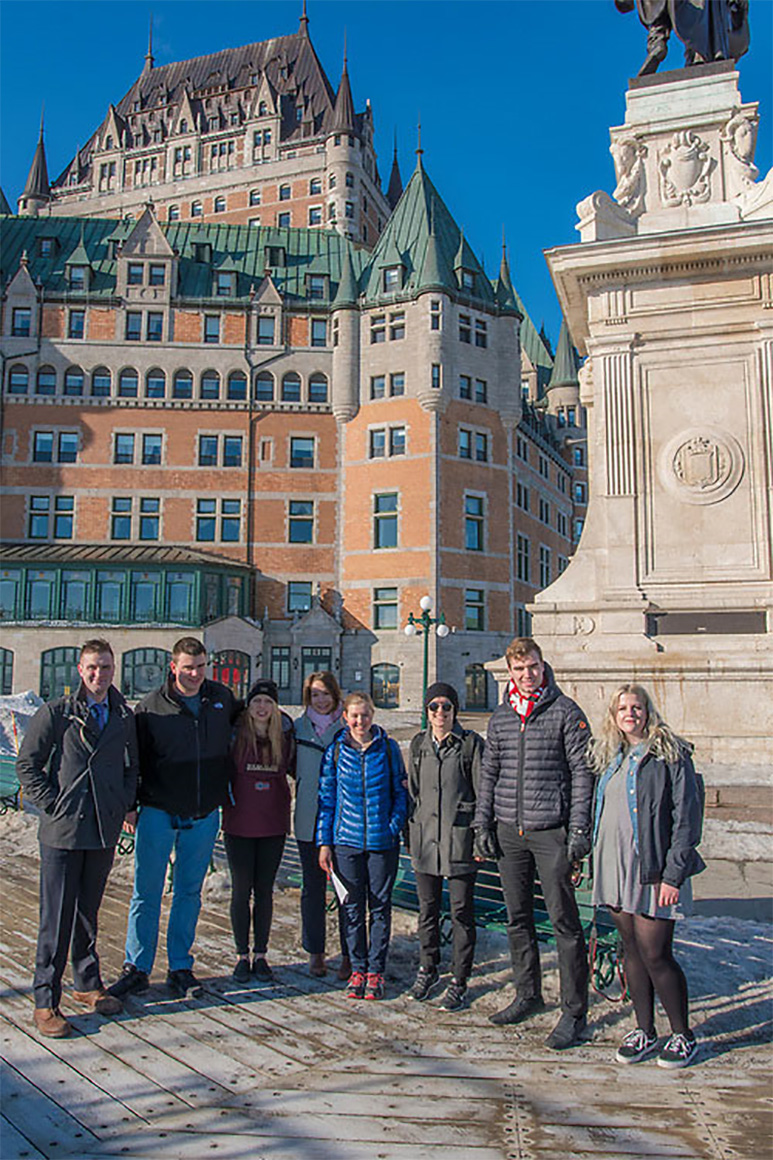 From March 22 to March 25, 2018, students of the FR 350 “Dialogues with Québec” class, under the supervision of French Professor Sophia Mizouni, traveled 400 years back in time by visiting Old Québec.

Upon our arrival to Québec, Educational Affairs Advisor Maude Renauld welcomed us at Le Ministère des Relations Internationales et de la Francophonie. Sitting in the conference room of Le Ministère, we talked about Québec’s role on the international scene, especially in the United States. We learned that, even with its small population, the francophone province has some of the most elite and specialized labor force in the world in areas such as hydroelectricity, game development, aeronautic, and artificial intelligence. The meeting ended with a guided tour of the Québec parliament that highlighted the province’s political organization.

All of the on-site activities were carefully selected to address the five chapters covered in in class which are: (1) Identity, (2) Place, History and Memory, (3) Cultural Immersion and Experiential Learning, (4) Migration, and (5) Civilization and Contemporary Culture. Professor Mizouni integrated months of class content into four days. The chapter on “Identity” focused on reading Wadji Mouawad’s Incendie, a play centered on the identity crisis of two twins who lived their entire life in Québec with their mother, a refugee from the Middle East. We saw this play come alive at Le Grand Theatre de Québec.

In the course chapter “Place, History, and Memory,” we read Suzanne Martel’s historical fiction, Jeanne, Fille du Roy. During this trip, we not only saw the history, but in a way, had the chance to live it. On our first morning in the capital, we participated in a rally across the Old City where we immersed ourselves in its architecture, history, and culture. As the tour guide mentioned, taking a walk in the Old Québec is the equivalent of stepping into a time machine and going back 300 years. On one side of the street, you can see French architecture while on the other side you will see British architecture.

To reinforce our learning experience, we visited museums. Le Musée de l’Amérique Francophone displayed the oldest French artifacts discovered in New France, now known as Canada. The exhibition, Partir sur la route des Francophone (following the Francophone road) complemented the course chapter on migration, and gave a sense to the reason some places in the United States have strong French Canadian heritage. Some students particularly enjoyed this exhibition as it gave us a chance to gain a better understanding of our own heritage. The Musée de la Civilisation featured more than 400 years of civilization history in Québec. Every exhibition in this museum was authentic and showed the province under different perspectives. We also had a lot of fun at Le Musée des Plaines d’Abraham which focuses on the final 1759 battle between the French and the British that took place a few steps away. In this museum, which is almost 100 percent interactive, students weighted 300-year-old cannonballs and donned old French or British uniforms. In an hour-long simulation, we tried to reproduce 18th century-cartridges and reenacted a surgery on the 1759 battlefield.

We will never forget Québec cuisine. At our arrival in La Belle Province, we discovered Nordic food at restaurant Chez Boulay. Each restaurant was chosen carefully so that the students would have a different cultural experience at every meal. From Nordic food at Chez Boulay to classic French Canadian food at La Buche, we had the chance to taste a different part of Québec’s culture each evening. Professor Mizouni said that she wanted “students to have a taste of Québec beyond simply poutine.”

Thanks to the Norwich University iPad initiative, we kept memories of this trip alive. Each of us chose one of the venues and we made short movies, interviewing visitors and reflecting on the exhibitions. We presented these short movies upon our return to class where we had the opportunity to unpack and reflect on our cultural and linguistic immersion. Québec City has a lot to offer, and we that we only saw the tip of this iceberg. This incredible learning experience taught us a little bit more about the life of our northern French neighbors.