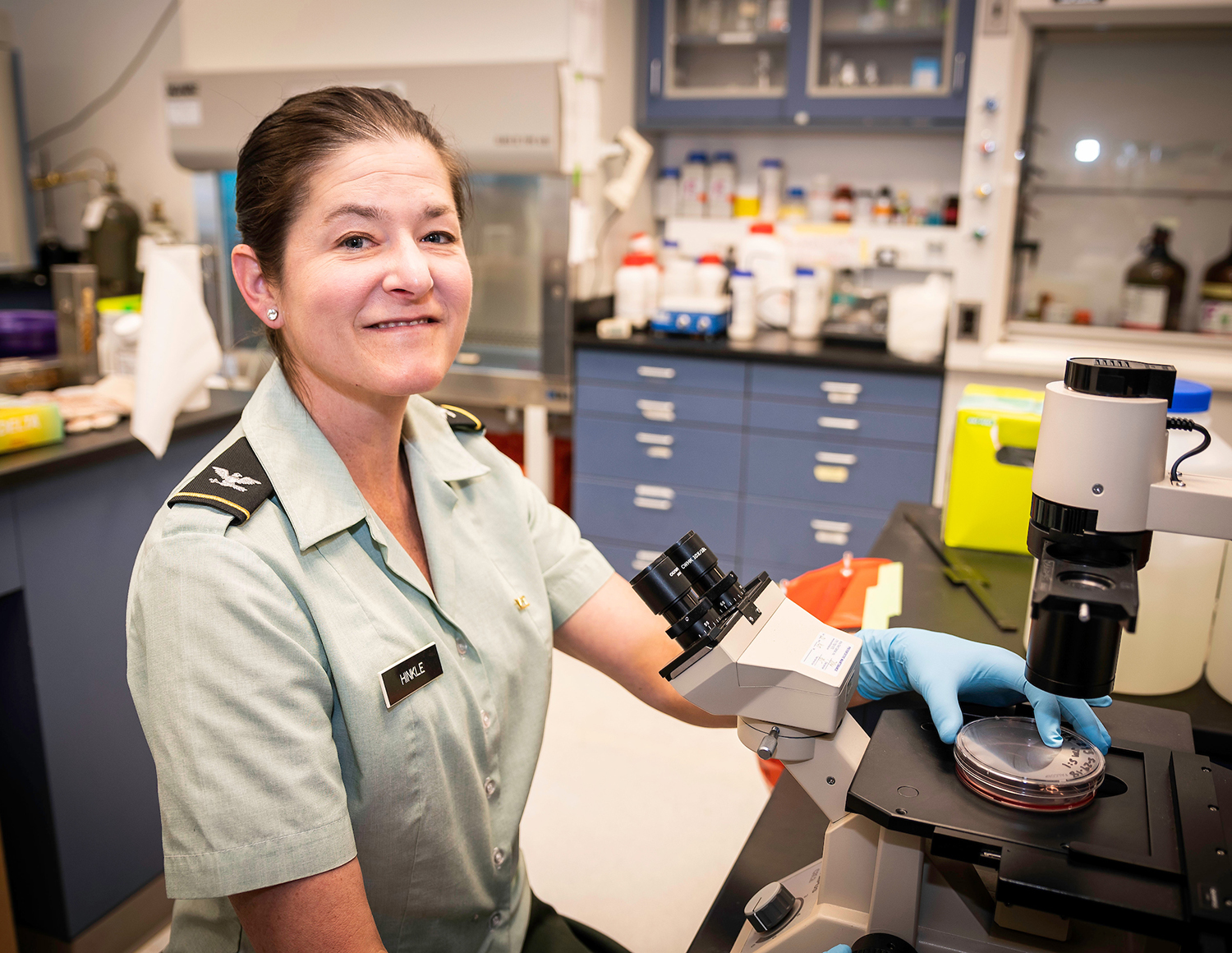 “This is not a cookie-cutter lab exercise with a predetermined result. This is novel inquiry. No one on the planet understands these relationships yet.” – Karen Hinkle

It would be nice, Karen Hinkle admits, if her research were to spawn a pharmaceutical patent—or a revolutionary new therapeutic intervention that might cure cancer. But it’s not likely. At least, not in a way in which her name would be attached.

A cell biologist with undergraduate and terminal degrees in physiology, Hinkle seeks to understand the intracellular signaling mechanisms of complex protein networks: what activates and deactivates them, how those interactions affect normal and abnormal cellular activity, and why. Ultimately, she explains, the results of her experiments can inform additional inquiry into increasingly complicated physiological processes.

“The value of my work lies in its basic science: I analyze the role of specific molecules, such as hormones, and their impacts on this intracellular network signaling. When we can better comprehend these kinds of interactions on a fundamental level, we gain useful insight into things like cellular differentiation and growth. This can then be extrapolated into all sorts of scenarios, like how malignant cells proliferate, and how to effectively halt, if not outright prevent it.”

Speaking of extrapolation: in considering Hinkle’s time on the Hill — as a teacher, scholar and administrator — it becomes immediately clear that, much like the molecules she studies, her presence stimulates growth.

In the 15 years since she first arrived at Norwich as an assistant professor—the first female to join NU’s biology faculty, and by far the youngest — Hinkle’s professional trajectory has shifted dramatically, in synchronicity with the university’s own change of course.

Back then, fresh out of a Ph.D. program at the University of Michigan, where she had used genetically engineered mice to study stomach acid secretion (her thesis, Enhanced calcium signaling and acid secretion in parietal cells isolated from gastrin-deficient mice, appeared in the American Journal of Physiology, Gastrointestinal and Liver Physiology in June 2003), Hinkle felt her true passion lay outside the laboratory, and inside the classroom.

“As a teaching assistant at Michigan, I discovered that I loved being in front of students and seeing the light bulb go on,” she recalls. “I started dreaming of becoming a professor at a small college. After visiting Norwich, I fell in love.”

It was a match made in heaven: Hinkle’s passion aligned with NU’s academic culture at the time, which emphasized teaching over scholarship. Still, she found herself surrounded by colleagues driven by their insatiable curiosity.

“For them, being in the classroom wasn’t enough. They’d entered academia because they had all these questions about the world, and wanted to be actively involved in discovering the answers. They became my role models and mentors, demonstrating that by conducting my own research, I could be a more effective educator.”

Hinkle embraced the lesson: re-engaging in her original scholarly pursuits while carrying a full course load. Annually between 2003 and 2010, she secured major internal and external grants to investigate topics ranging from the effects of age on genetic expression and protein synthesis in mice, to DNA damage in S. cerevisiae (brewer’s yeast) following exposure to a commonly used lampricide. In 2006, she shared first authorship on a second published paper examining stomach acid secretion, titled Parietal cell hyperstimulation and autoimmune gastritis in cholera toxin transgenic mice. She earned the first of her two Charles A. Dana Category I awards and the Homer L. Dodge Award for Teaching Excellence. Throughout, she has mentored dozens of undergraduate research projects, directly involving students in her own investigations and weaving what she learned into her classroom discussions.

“Just as Norwich was recognizing and promoting this model of teacher-scholarship, I was evolving my career to match,” Hinkle says.

Then, in 2011, she took a yearlong sabbatical to assist Bryan Ballif, Ph.D., in his University of Vermont laboratory. Together, the pair developed novel research tools to analyze the signaling pathways of proto-oncogene tyrosine-protein kinase (Fyn), a protein involved in regulating cell growth. That collaboration resulted in two peer-reviewed publications. It also vaulted Hinkle’s scholarship, and her students’ experiential education, into the next stratum.

“This has been a tremendous opportunity for me to continue sophisticated research in collaboration with two high-profile labs,” she says.

Currently, Hinkle, Ballif, and Ebert are examining the effects of Discoidin, CUB and LCCL domain-containing proteins (DCBLDs) on neural retina development in zebrafish. “We know that in the absence of DCBLD2, neuronal defects occur,” she says. “Now, we hope to elucidate the mechanisms behind that, and the ramifications.”

Her second-year cell biology students are assisting. For the entirety of their spring semester, with funding from Ballif’s and Hebert’s NSF grant, they are discovering protein binding relationships to DCBLD2 in the intact organism of zebrafish to better understand the signaling networks involving this protein involved in growth.

“This is not a cookie-cutter lab exercise with a predetermined result, recapitulated every semester,” Hinkle emphasizes. “This is novel inquiry. No one on the planet understands these relationships yet. It’s difficult to conduct a real research experiment with undergraduates because you don’t know what the answer is, or whether there will be a positive result. But we’re engaging students in critical thinking, in a scientific process in which they understand something much bigger is at stake. And where I think my biggest impact will be is on the number of students through the years who can participate in the project, expand their knowledge, and come into their own as researchers. I’m really proud of that.”

In this, Hinkle models the high-impact practice for which Norwich has become nationally known.

“She is a true teacher-scholar, cast in the Norwich dye first envisioned by President Schneider,” says Sandra Affenito, Ph.D., provost and dean of faculty. In recognition for her leadership and commitment to this ideal, Hinkle was appointed associate provost for research and chief research officer in January 2018. As such, she is directly responsible for growing NU’s culture of inquiry—and its reputation for scholarship.

“We are an institution that supports and engages faculty and students in first-class research and deep creative processes,” she says. “We do that by saying ‘yes:’ yes to faculty with a demonstrated passion for these things. Yes to students who are comfortable asking questions about the world. And yes to creating more opportunities for both to engage and collaborate.

“But we can’t stop there,” she asserts. “We can’t just say, ‘Good luck with that!’ To evolve and grow as an institution, we must continue offering the meaningful resources and support our faculty needs—so we can write our accomplishments in the sky.”

Who knows? Pending the results of her DCBLD experiments, Hinkle’s own achievements — and those of her students —may soon adorn the atmosphere.