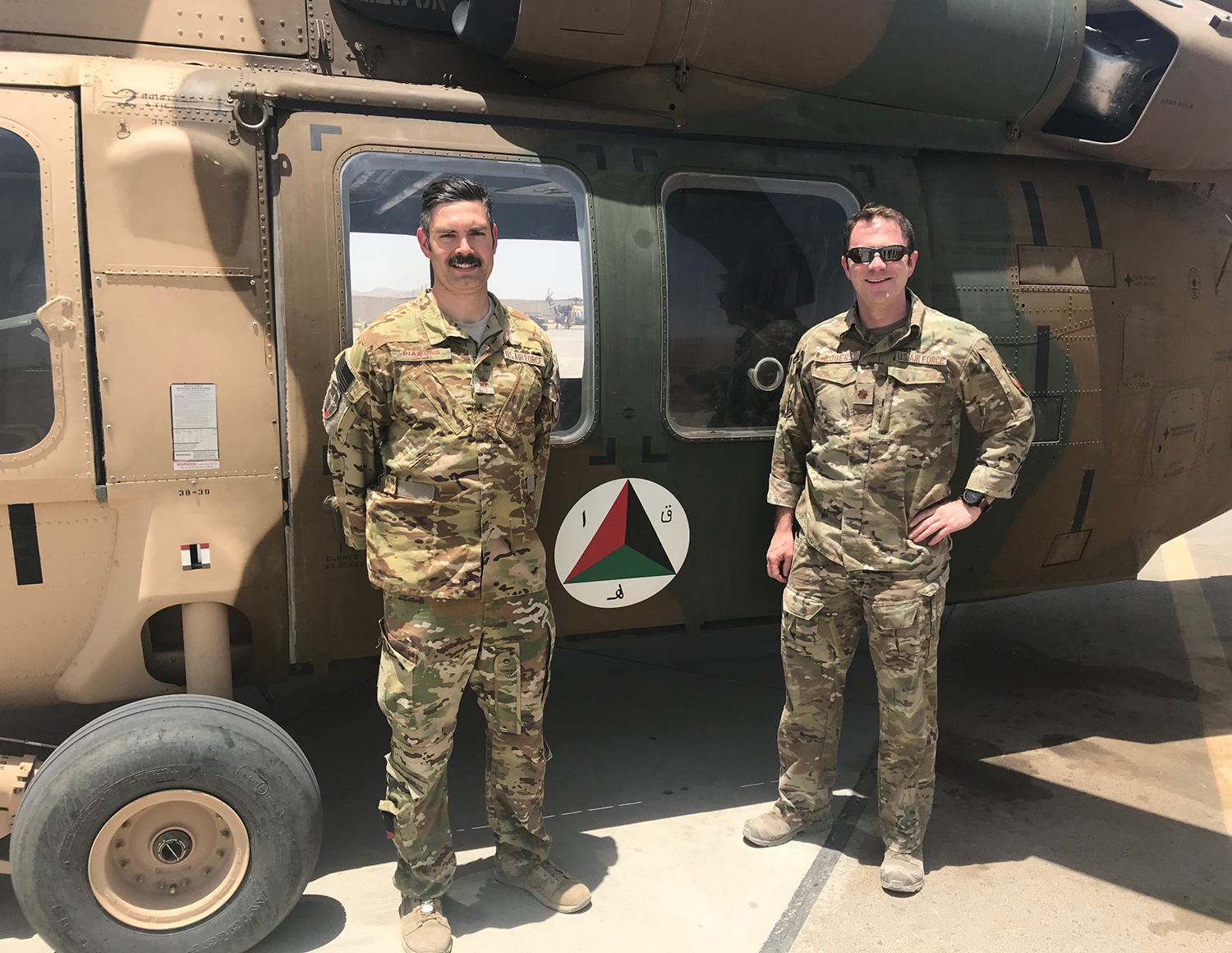 How the two former cadets and CGCS classmates crossed paths again in Afghanistan.

FIFTEEN YEARS AFTER THEY first met on the Hill, U.S. Air Force Majors Theodore Rogers ’05, M’11 and Matthew Diamond ’06, M’11 are together again—teaching inexperienced pilots the fundamentals of tactical flight in contested situations.

And they’re doing it in Afghanistan.

The pair are among the inaugural members of a multinational team working to stand up a new UH-60 Blackhawk helicopter program for the Afghan Air Force. Their year-long assignment, which will have concluded by the time this article appears, is part of a $6 billion modernization effort. Its goal, Rogers says, is to elevate the expertise of Afghan Air Force pilots and prepare them to be “leaders making smart decisions on risk, who can advise their counterparts [in the Afghan Army] on how best to deploy aircraft on the battlefield.”

The program has proven rewarding not only for the trainees, but for their flight instructors.

“When [the Afghan pilots] first started, in the daytime, they were putting the aircraft—and maybe us—in a difficult situation,” Diamond says. “Now, not only are they flying formation at night, they’re also navigating in a hostile environment and getting results. It’s been immensely gratifying to witness.”

Both men landed at Kandahar Air Base thanks, in part, to parallel careers that first took wing at Norwich. Rogers and Diamond both received Air Force ROTC scholarships and qualified as UH-1 (“Huey”) medical evacuation helicopter pilots after graduation. They both went on to fly combat search-and-rescue missions in the HH-60G Pave Hawk during separate deployments to the Middle East.

Their careers continued to mirror each other when Rogers and Diamond both earned master’s degrees in diplomacy and international conflict resolution from NU’s online College of Graduate and Continuing Studies.

“To have to go in and do something extraordinary with people who have language, cultural, and security barriers was daunting,” Diamond says. “The [master’s] degree offered many lenses through which to view the implications of these barriers, and how to successfully overcome them.”

“We make strategic-level decisions and recommendations daily,” Rogers adds. “Norwich taught us how to coalesce people from diverse backgrounds so they can perform. In the end, we’re all part of one Corps and one team.”