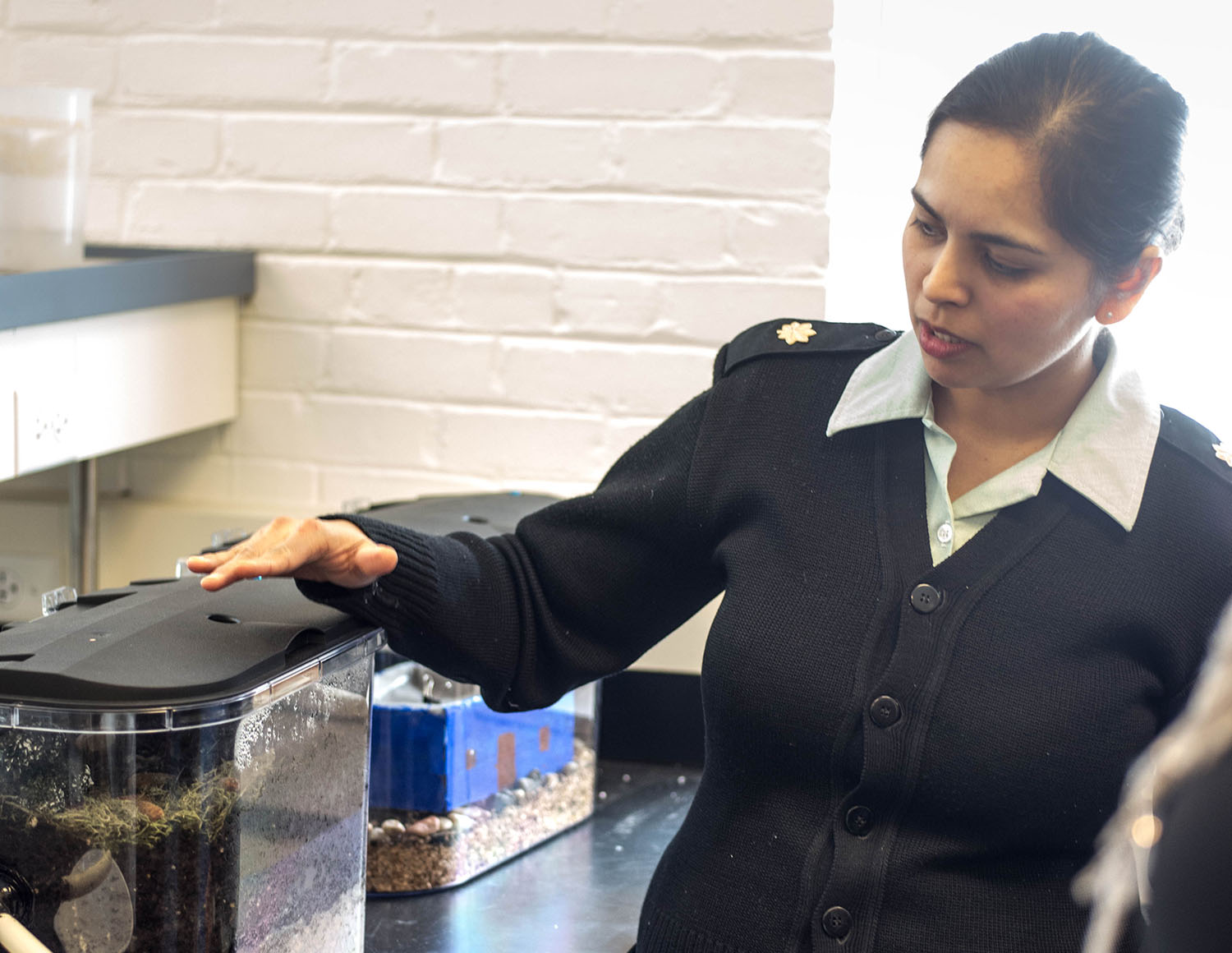 IN MAY 2018, just back from an international conference, civil and environmental engineering professor Tara Kulkarni settled into her chair on the second floor of Partridge Hall. Outside her window, the statue of Norwich founder Alden Partridge stands as a reminder of two centuries of engineering tradition.

It was a casual entreaty, meant for warmup. But her answer encompassed, at its very essence, the reason she is Norwich University’s latest Board of Fellows Faculty Development Prize winner.

“This afternoon we’re meeting for a potential new CGRS initiative.”

Kulkarni is the founding director of CGRS, the Norwich University Center for Global Resilience and Security. In the year since its launch, she has wasted no time putting the center’s purpose into practice: “to build a society that is strong, healthy, and secure, locally and globally, in the face of a changing climate.”

That afternoon, Kulkarni had called a meeting with Norwich colleagues in an effort to galvanize interest in the Vermont Phosphorus Innovation Challenge. In introducing the initiative, Gov. Phil Scott posed the question: What if, rather than waiting to manage phosphorus after it hits the ground, we capture it from manure before application?

As a civil engineer with a deep commitment to environmental issues, these are the kinds of questions Tara Kulkarni spends her time contemplating.

Growing up in Pune, a city of three million in western India, Kulkarni had set her sights on a degree in journalism, maybe even creative writing. She laughs at the recollection of that discussion with her father.

“It was the typical conversation with your dad. Well, I don’t know if it’s typical, but it was for me. He said, ‘You can always write, and that will complement whatever degree you get.’”

Kulkarni is the oldest of three daughters. Knowing what they’d be up against in the patriarchal, male-dominated Indian culture, Kulkarni’s parents raised them to be self-sufficient and financially independent. At the time, Kulkarni hadn’t yet begun to envision a life outside of Pune.

“If you’re competing for a job in India,” she said, “you’re better off getting a tech degree.”

Her board exams qualified her for entry into the engineering program at the University of Pune. She chose civil engineering because it was the last available open seat in the university’s highly ranked College of Engineering. “The goal was to work hard the first year and then maybe switch over to something like computers,” she says.

“I did awfully, horribly in my first year of college. I wasn’t interested in academics and instead worked on the school magazine as the English editor, led our debate teams, and did backstage for dramatics.”

Unable to change majors, Kulkarni entered her sophomore year intent on salvaging her college career. It wasn’t until her junior year — when she was introduced to environmental subjects — that a switch flipped.

“I thought, This, I get. The air that we breathe, if it’s unclean, you could pass out. If you don’t have clean water to drink, you could die.”

Tara Kulkarni had found her calling.

Graduate school and past jobs in air quality, environmental health modeling, and waste cleanup, all brought Kulkarni to her current focus areas: water, and resilience.

Today, as part of her Board of Fellows-prize-associated work, she is looking at 23 U.S. cities, all members of the 100 Resilient Cities network, to see how they track the resilience of their stormwater infrastructure. Many of these cities, from San Francisco to New York, Washington D.C., and Boston, combine sewage and stormwater in a single pipe for transport to a sewer treatment plant.

Gradually, responding to federal mandates aimed at mitigating CSOs, cities and municipalities are upgrading their drainage systems to separate rainwater and sewage.

But Kulkarni is quick to point out that policy works only if enforced, regulations take us only so far, and infrastructure work is slow-going and expensive. As an alternative, she has endeavored to use examples from the resilient cities to address the solution — above ground.

When you walk down the street, you may notice the drains, but have you ever imagined the world beneath your feet? The elaborate underground piping systems that catch and route sewage from homes across the United States are aging, leaky, and more and more stressed. Add to that rainwater, which runs from driveways, through the grates, and into the same pipes.

Now, imagine all the opportunities you have, as an individual, to divert that rainwater. If you direct your rain gutters, for instance, to discharge into your lawn instead of the driveway — the technical term is “downspout disconnection”— that would allow the rainwater to be absorbed and filtered naturally through the soil, thus relieving stress on the infrastructure.

Now, imagine if everyone in your community did the same. The next time we are hit with a Harvey or Maria, you may see the infrastructure absorb the shocks better. If the system does fail, it recovers more quickly.

“Improved resilience leads to eventual sustainability,” Kulkarni says. In practical terms, to reduce stress on a system translates into fewer resources spent on repairing and rebuilding. “And,” Kulkarni says, “we need design guidelines, and metrics, to track the performance of these systems and make sure that they are, in fact, resilient.”

In 2017, almost immediately after its founding, CGRS took over the role of coordinating the Resilient Vermont Network. Their work involves conserving floodplains, exploring strategies to limit development in river corridors, and building resilience among vulnerable populations. The CGRS platform will allow Kulkarni’s research in topics like green stormwater infrastructure (GSI), to have a direct impact in helping educate communities and create systems that, like downspout disconnection, alleviate stress on water-treatment systems.

“Focusing on GSI is a way to showcase how water infrastructure can be resilient, and it also pulls up some of the infrastructure from underground into a place where it’s visible,” she says.

Green roofs, cisterns to harvest rainwater, rain gardens, are all projects that can be carried out at the local level.

“If you’re passing by a parking lot that has this nice rain garden, you may look at the plants and go, ‘Oh, that’s pretty.’ So it’s aesthetically pleasing, but it’s actually doing a job, as well, by slowing down the water and filtering contaminants.”

And, in the process of coming together for a common purpose, the community grows stronger and more resilient.

For some struggling areas of our planet, Day Zero is fast approaching.

Day Zero — the day a community runs out of water—was a hot-button topic at Resilient Cities, the Annual Global Forum on Urban Resilience and Adaptation in Bonn, Germany, which Kulkarni attended in May with Elizabeth Ells ’18. With the prospects of tap shutoff this year, the drought-ravaged city of Cape Town, South Africa, enacted restrictive policies on water use. Residents responded, and through their collective efforts, pushed Day Zero to 2019. Proof positive that human intervention does work.

“So many countries and communities are already at Day Zero and haven’t necessarily made the headlines the way Cape Town did,” Kulkarni says.

There is no doubt we are embroiled in a global water crisis, and Tara Kulkarni knows the solutions are not always simple. But she also believes that if everyone were just a little more aware, and exercised a little more stewardship in their own backyards, we can come that much closer to clean water for everyone.

“Whether it’s Pune’s water quality or Tanzania’s or Haiti’s, it is mine, just as much as Lake Champlain’s or that of the Dog River,” she says. “We are global citizens.”