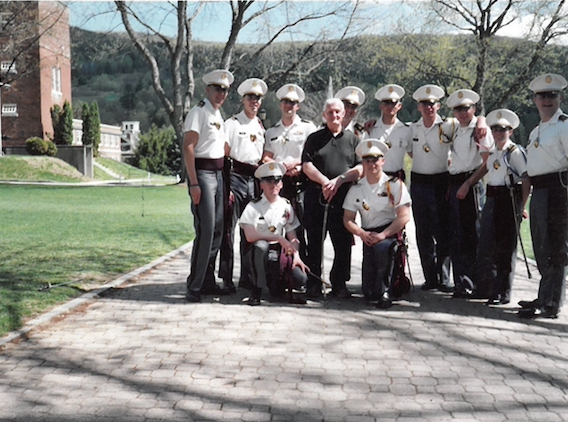 Described by many as a gentle man with a heart of gold, Ralph “Skeezy” Thurston was a fixture on the Norwich campus. For 60 years, he worked in the mess hall, serving up his famous “bug juice” and the generous smiles that touched the lives of so many students, faculty, and staff.

“His love of life was Norwich,” said his sister Bette Provost. And Norwich loved him back.

It’s no surprise that, then, that as word of his passing spread, cards and letters started pouring in. “We heard from alumni in Texas, Florida, Massachusetts, Arizona,” Bette said. From far and wide, students, faculty and staff spanning six decades spoke lovingly of the “Juice-Barrel Man.”

Thurston was born in Northfield, the second of five children. He acquired his nickname from a housekeeper, who thought the toddler should have a distinct name from his father Ralph. She chose “Skeezy,” and the moniker stuck.

In 1947, Skeezy went to work for his uncle George Morris, who ran the Norwich mess hall, then located in what is now White Chapel. Strong and dependable, the 14-year-old washed pots and did whatever else was needed, quickly earning a reputation as a cheerful, hardworking employee.

As the years turned to decades, he acquired celebrity status. Every September 26th, his birthday, the entire Corps would sing “Happy Birthday” and present him with a cake in the Crow’s Nest during second mess, after which Skeezy would talk about how much he loved working at Norwich. In summers at the conclusion of every Russian School, Skeezy would be the first to receive a photo of that year’s students and faculty.

Skeezy was a fan, too. He loved country music and Norwich athletics, particularly men’s hockey. During the season, Skeezy often stopped by the locker room to greet the players and coaches. Over the years, he earned the title of Honorary Alumnus and received a gold watch for his remarkable 60 years of service. In 2009, the Norwich football team presented him with a custom ECFC championship ring engraved with the word “FAN.”

Skeezy’s ashes will be laid to rest in Mount Hope Cemetery in a box with a small transistor radio. “He’ll be listening to his favorite country singer,” his sister says. “Boxcar Willie.”