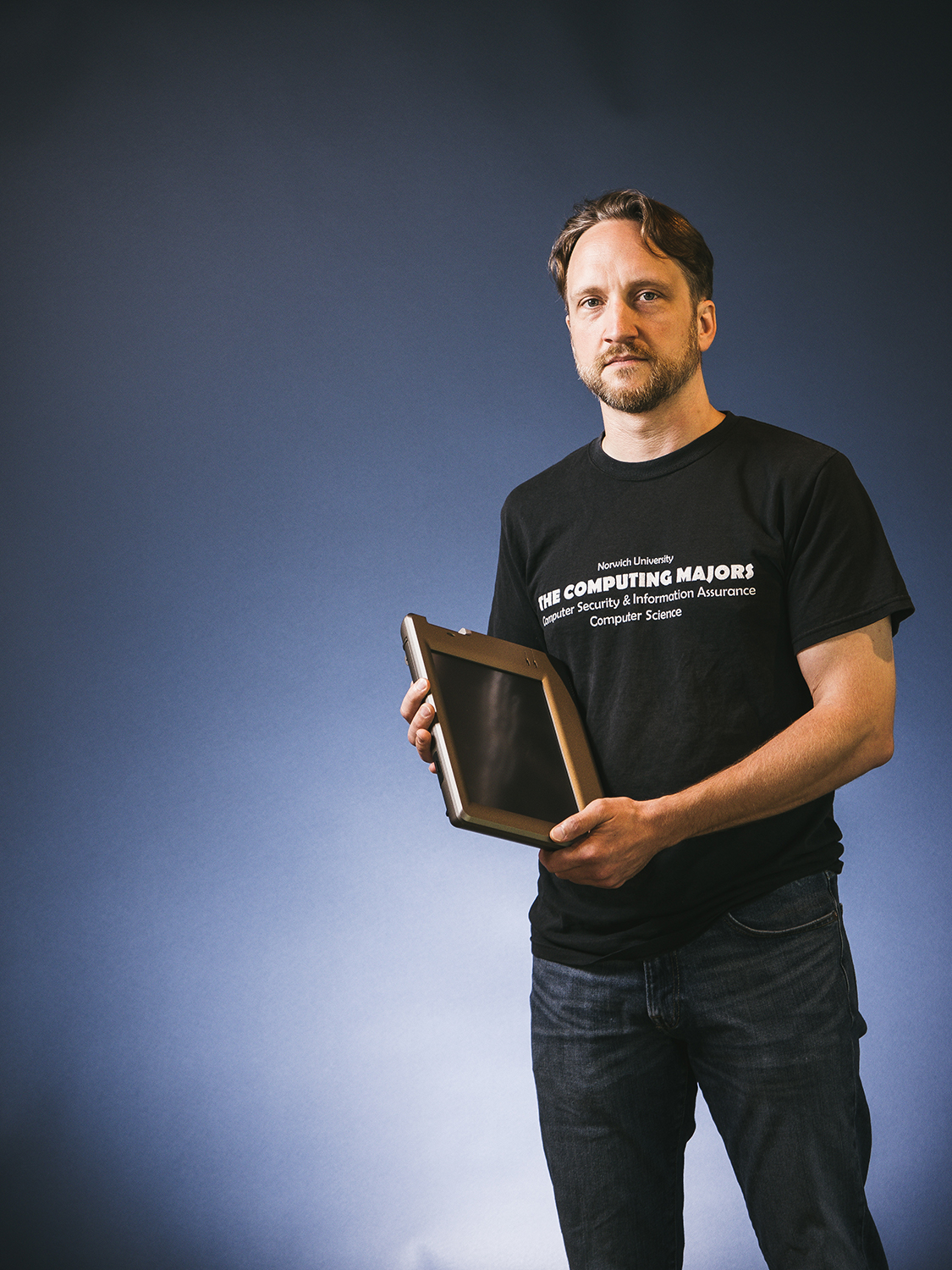 SOME STORIES ABOUT A SOURCE BARELY SCRATCH THE SURFACE. Take our report on NU computer science and cybersecurity Prof. Jeremy Hansen, who shares his insight on the cyber vulnerabilities of our digital voting systems. From an editor’s point of view, it’s a timely piece that spotlights (yet another) Norwich faculty member thinking about and working on big things. Yet, the story also stinks. It’s simply too short to capture all the other interesting projects that Hansen is involved with.

This summer, for example, he traveled to Athens with research intern Elizabeth Moss ’20 to teach coding concepts at a refugee center for women called the Melissa Network. Some of the adult learners there couldn't read. How do you teach someone to code without handing them a textbook? It’s a problem Hansen and others in his field have thought about for a while. Hansen learned about the Melissa Network through a friend of a friend, who observed that the women there who didn’t read often arrived at the most creative coding solutions. So last spring, he shared the idea of volunteering in Greece with his students. Moss jumped at the chance. Together, they wrote grants applications and secured the necessary funding.

Moss planned the lessons herself. Hansen supplied minimal direction. “I was really her teaching assistant, rather than the other way around,” he says. To teach the concept of binary numbers, the rising junior bought eight light switches. She used them to illustrate the OFF/ON sequences of eight-digit binary numbers--the 1s and 0s that underpin computer code at its most basic. Pretty inspired.

Closer to home, Hansen serves on his local selectboard and fire department and has been a driving force behind a proposal to create Central Vermont Internet, a publicly operated, high-speed Internet service for communities in central Vermont. The idea is to empower the Vermont economy. “Anything that you want to do in this 21st-century economy requires actual Internet connectivity,” Hansen says. He points out that most small businesses in the state start in the home or garage, but only about 13 percent of Vermont households have access to 100Mbps service. “If you have real Internet connectivity at your home, which is your business, you can actually get stuff done.”

And then there are Hansen’s political career, his Maymester class in Berlin on surveillance and privacy, and his research on computational social choice and (separately) the cybersecurity of implanted medical devices. Not to mention his work as a FIRST LEGO League coach for his son’s elementary school robotics team and his plan to start an eSports team at Norwich. But here we are again, out of room to tell the full story.