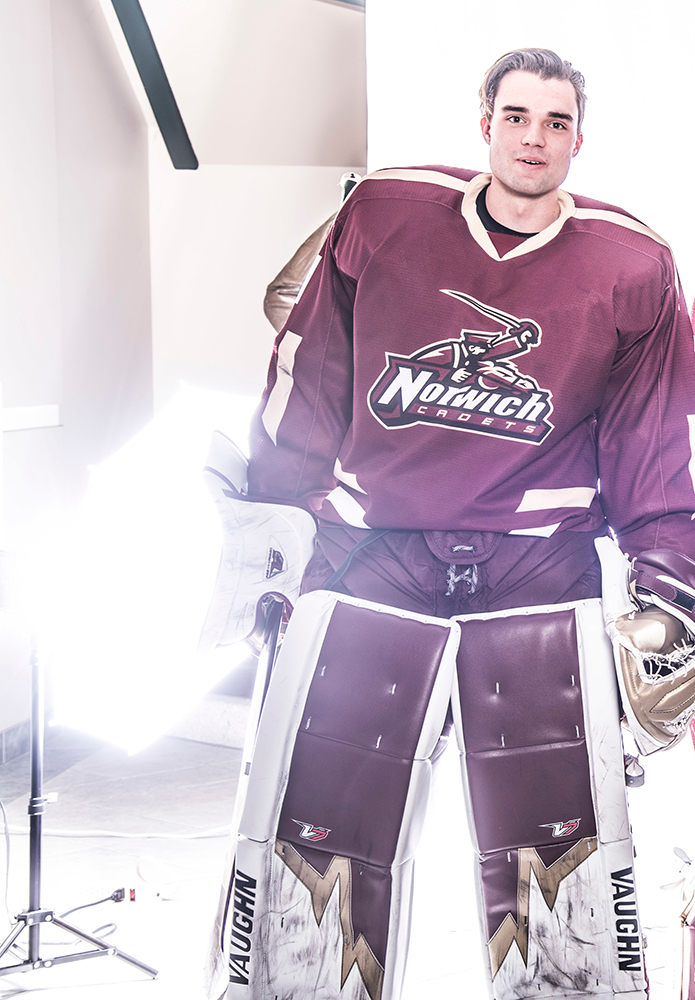 The all-star Canadian hockey goalie and Norwich Class of 2018 valedictorian skates circles around most mortals.

Braeden Ostepchuk seems at times like a super sapien, one who traveled to Earth from the future. But we can confirm here that he is simply an incredibly smart and athletically gifted Canadian.

In June, the Lethbridge, Alberta, native was named the Academic All-American of the Year by the College Sports Information Directors of America. Chosen from candidates across the U.S. representing 12 male sports, Ostepchuk is the first athlete from Norwich ever to receive the honor.

“I look at Braeden as one of the most complete human beings I’ve ever met,” said departing NU men's head ice hockey coach Mike McShane, citing Ostepchuk’s maturity, intelligence, and athletic ability. “To be able to combine all of those things and become a tremendously successful person at that age is remarkable.”

“He was a great leader on and off the ice at Norwich,” McShane added, noting that fans, faculty, and fellow students had nothing but the highest respect for Ostepchuk.

Ostepchuk finished his Norwich career the same way he started it—strong. A 4.0 student since his freshman year, the mechanical engineering major made the most of the diverse opportunities on and off the ice.

Ostepchuk was part of the senior engineering design team that won this year’s NASA BIG Idea Challenge, helping to design and build a prototype for an inflatable solar array that could power a future Mars colony.

His status as a Canadian citizen prevented him from accepting the competition’s major first-place prize—a summer internship with the U.S. space agency. Instead, he has been working with Vanguard Plastics in Connecticut, which is owned by NU alums Larry ’64 and Chris Budnick ’86.

As for Ostepchuk’s athletic accomplishments, the three-time All American racked up an impressive list of accolades, including NEHC Goalie of the Year. He is NU’s all-time leader in career shutouts for the men’s hockey program and second on the all-time goalie win list with 51 career victories.

He even missed a few classes this spring to tend goal for the Greenville, S.C., Swamp Rabbits and the Pensacola, Fla., Ice Flyers.

“Norwich taught me how to think and how to interact with people,” he says. “These are the skills that I will take with me throughout my life.”