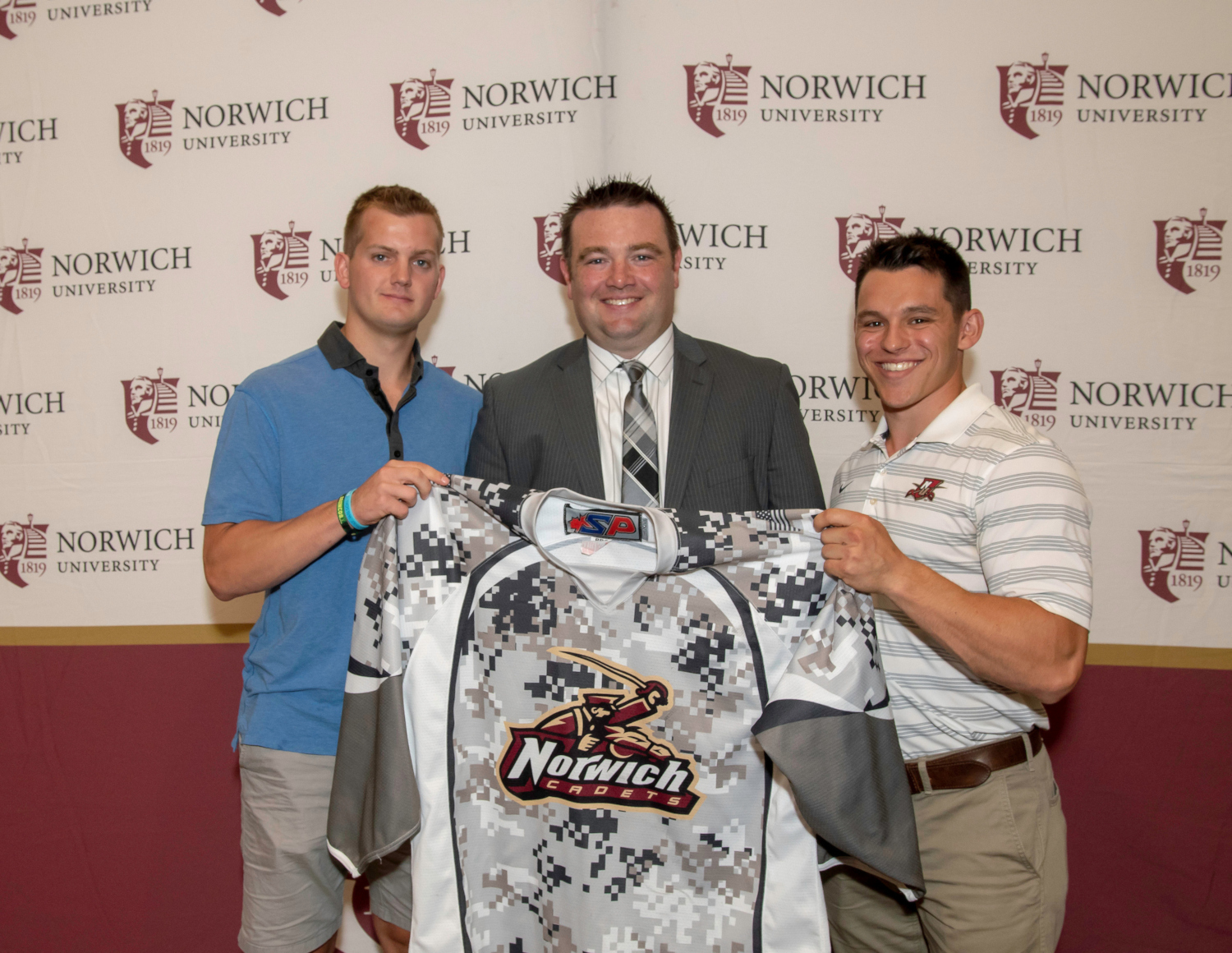 NORTHFIELD, Vt. – Cam Ellsworth has been tabbed as the new head coach for Norwich men’s ice hockey’s, the 11th to hold the top job in the program’s 100-plus-year history.

Ellsworth follows legendary head coach Mike McShane, who announced his retirement June 15 after leading Norwich to four NCAA Division III National Championships in 23 years behind the Cadets’ bench. Ellsworth has spent the last seven years as an assistant coach at Division I UMass Lowell under Norm Bazin, including the last two years as the associate head coach.

“I am extremely humbled and honored to be the next head men’s ice hockey coach at Norwich University,” Ellsworth said. “I would like to thank the search committee and the leadership at Norwich University for their confidence in me. My wife Julie, son Asher and daughter Addyson are excited to integrate into the Norwich community and get started.”

Ellsworth has been one of the driving forces behind UMass Lowell’s rapid ascension to the top of the Division I hockey world, including winning three Hockey East Tournament titles. UMass Lowell made five NCAA Tournament appearances in Ellsworth’s seven seasons, highlighted by a third-place finish in 2012-13.

UMass Lowell won 21 or more games in six of seven seasons, including a 19-win difference (five to 24) in Ellsworth’s first season in 2011-12 with Norm Bazin.

The 2012-13 season was the best season in UMass Lowell’s 34-year history at the Division I level. The River Hawks went 28-11-2, swept the Hockey East regular season and tournament titles, as well as made the only Division I Frozen Four appearance in program history.

“Cam Ellsworth is an outstanding coach and seasoned recruiter who helped establish U-Mass Lowell as a national power in Division I college hockey,” Mariano said. “He brings a wealth of experience to our hockey program and I am confident he can continue the success that Norwich hockey has attained.”

Ellsworth joined the River Hawks after spending three seasons (2008-2011) as an assistant coach with the Sioux City Musketeers of the United States Hockey League. He also adds eight seasons of professional and collegiate experience as a goaltender for Michigan Technological University and several teams in the ECHL.

In his three seasons with Sioux City, Ellsworth recruited or coached 10 players drafted by the NHL and another 43 who committed to Division I hockey programs.

“We are delighted to welcome Cam Ellsworth and his family to Norwich,” said Norwich University President Richard W. Schneider. “Cam is a well-respected men’s hockey coach, recruiter, and mentor. We are confident he will continue one the finest of Norwich traditions of molding scholar athletes. I want to thank the members of the search committee and especially Athletic Director Mariano on finding an excellent addition to our coaching staff.”

Ellsworth graduated from Michigan Tech with a B.S. in Business Administration in 2005. He was a four-year letter winner with the Huskies from 2001-05, where he still ranks as the program’s all-time leader in games played (117) and saves (3,510).

He graduated in May 2017 from UMass Lowell with a master’s degree in Business with a concentration in managerial leadership.

Ellsworth’s staff will consist of the entire assistant staff from last year, led by Steve Mattson, who returns for his nineteenth season at Norwich. Bryce Currier ‘15 and Ronny DiMasi return for their third years with the staff, while Chris Czarnota ‘14 will be in his second.

Norwich is coming off winning its nineteenth New England Hockey Conference (NEHC) regular season title in the last 20 years in 2017-18. The Cadets went 19-7-2 and fell in the NEHC Championship game to Hobart.