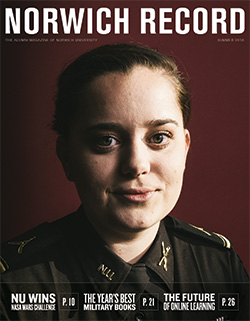 You’ve probably noticed by now that this issue of the Norwich Record looks different from previous issues. We hope you like it. Reporting every important story about our more than 24,000 alumni, 4,000 students, and 700 faculty and staff in just four dozen pages once a quarter will always be a near impossible task. So we’ve redesigned the magazine to help us tell just a few more of those stories in each issue and hopefully tell them well.

What hasn’t changed is the spirit, drive, and impact of the people and endeavors highlighted in these pages. Take, for example, the subject of our cover portrait: Corps of Cadets junior Emma Bunker ’20 from Berryville, Virginia. The Air Force ROTC scholar and mechanical engineering major was invited to join the Honors Program at Norwich her freshman year. She plans to use her engineering skills after military service to design better prosthetic devices for people in need. As part of her Honors Program work last fall, Bunker wrote a 19-page research paper proving two theorems, Green’s and Stoke’s, to extend her Calculus III coursework. Outside of class, Bunker volunteers for Buddy Up, a campus student group that provides positive role models for elementary-school-age children in the Northfield community. “I’ve been around kids my whole life,” Bunkers says, noting that her mother works as a pediatrician and her father serves as a pastor. “What you tell [kids] usually sticks. I love being the person to influence them for the better.”

It’s tempting to say that hard work and service are in Bunker’s DNA. But such a metaphor falls a bit short. Bunker’s effort and empathy were no doubt sparked by good role models growing up. But she’s also forged that long chain of large and small personal choices and individual actions that, over time, we come to know as values and character. Bunker may not say it directly, but she came to Norwich to challenge herself and make the world a better place, and she isn’t afraid to work hard to do it. Sound familiar?

In closing, we must acknowledge and celebrate two esteemed colleagues who have devoted so much energy, passion, and sparkling work to this magazine over the past 16 and 5 years, respectively. They are departing Editor in Chief Diana L. Weggler and departing Features Editor Jacque Day. Both remain part of the Norwich family and will continue to contribute to Nor¬wich publications, in print and online—as they have done so well in this new issue.