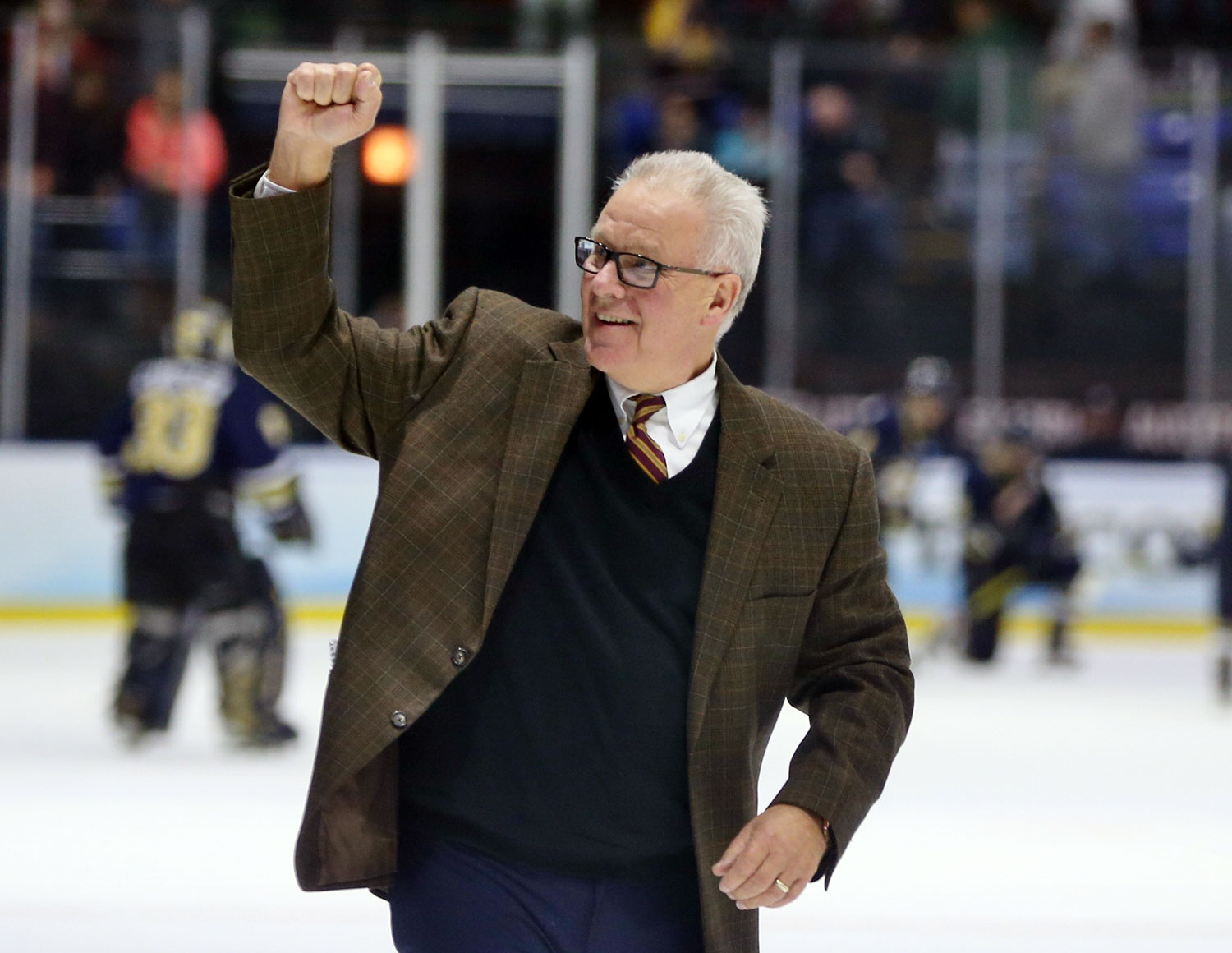 After a historic 23-year career at the helm of the Norwich University men’s ice hockey program, Mike McShane announced his retirement from coaching on Friday morning at a press conference in Kreitzberg Arena.

McShane, Norwich’s 10th Men’s Hockey Coach, is a legendary head coach for having guided Norwich University to four NCAA Division III National Championships, with the latest coming in 2017 in a 4-1 win over Trinity (Conn.) in Utica, N.Y.

“It’s been a great honor to coach here at Norwich University for 23 years,” McShane said. “I’ve been very fortunate to coach for 46 years and end my career at a special school like Norwich. I appreciate the tremendous support we have had here right from the top down from President Schneider to Vice President Frank Vanecek and Athletic Director Tony Mariano. I’d like to thank my assistant coaches, especially Steve Mattson, who have helped sustain the program’s success by doing an excellent job recruiting. I’m looking forward to the search for a new coach and we’re doing everything in our power to make sure the success of the program continues.”

Under his guidance, Norwich won 19 of the last 20 New England Hockey Conference (NEHC) regular season titles, including an unprecedented 17 in a row that ended after the 2014-15 season. Norwich made 16 NCAA Tournament appearances and 12 Frozen Four appearances with McShane behind the bench.

“Coach McShane represents everything that is great about Norwich athletics. A leader, a teacher and a role model to our men's hockey team for over two decades, Mike has shared his 37+ years of coaching experience and talent freely with our student-athletes, his coaching staff and the hockey community with the goal of performing to our best each and every day. The hockey players he has recruited excel on and off the ice and are always in the top of the class academically with a 100 percent graduation rate. Those who have played for and coached with Mike, or have had an opportunity to interact with him, are lucky to have done so. We will miss his leadership at the helm of our perennial national championship contending men's hockey program," President Richard W. Schneider said.

He wrapped up his Norwich career winning back-to-back New England Hockey Conference (NEHC) Coach of the Year honors in 2017 and 2018 to bring his total to 11. On top of leading the Cadets to the 2017 title, McShane also led the Maroon & Gold to national championships in 2000, 2003 and 2010.

Norwich won the NEHC Tournament crown 12 times total, including three in a row from 2010 to 2012. During his Norwich career, he posted a 497-130-38 record. He became the Norwich program's all-time winningest coach during the 2008-09 season. Under McShane's guidance, the Cadets never posted a losing season.

“Mike McShane has proven to be one of the best coaches in all NCAA divisions in the country,” said Norwich University Director of Athletics Tony Mariano. “His record speaks for itself and he has elevated Norwich hockey to national prominence since his arrival in 1995. His teams have played with great intensity and sportsmanship on the ice and have done outstanding work in the classroom. All of that is due to Mike’s leadership and his ability to prepare his athletes for not only hockey but life after their playing days are over. A consummate professional and outstanding coach and mentor, he will be greatly missed by all of us here at Norwich. I wish him all the best in his retirement that he so richly deserves.”

A native of Wakefield, Mass., McShane graduated from the University of New Hampshire in 1971 as the third-leading scorer in Wildcats' history and then he went on to earn a M.Ed. from Boston University.

McShane got his start in coaching at New Hampton (N.H.) Prep School in 1972. He led the Huskies to three Division I Prep Championships in six years and a 122-25-6 record before becoming an assistant coach at Dartmouth College in 1978. In November 2010, McShane was inducted into the New Hampton Hall of Fame.

During his two seasons at Dartmouth, the Big Green won a pair of Ivy League titles and advanced to the NCAA semifinals both years.

McShane was named the head coach at Division I St. Lawrence University in 1980, leading the Saints to a 95-65-6 record in five seasons. In just a couple of years, he turned a struggling program into a national contender. He led the Saints to an NCAA Tournament appearance in 1983.

He left Providence in 1994 to become a consultant for the Ottawa Senators of the National Hockey League before coming to Norwich.

In 37 years of college coaching, McShane has received 25 "Coach of the Year" awards, including earning the Edward Jeremiah Award from the American Hockey Coaches' Association in 1997, 1999, 2000, 2010 and 2017 as the College Division "Coach of the Year."

Norwich University will begin a national search to fill McShane’s head coaching vacancy immediately with the goal of having a new coach in place for August 1.

Derek Dunning Director of Athletic Communications Office Tel: (802) 485-2902 This email address is being protected from spambots. You need JavaScript enabled to view it.