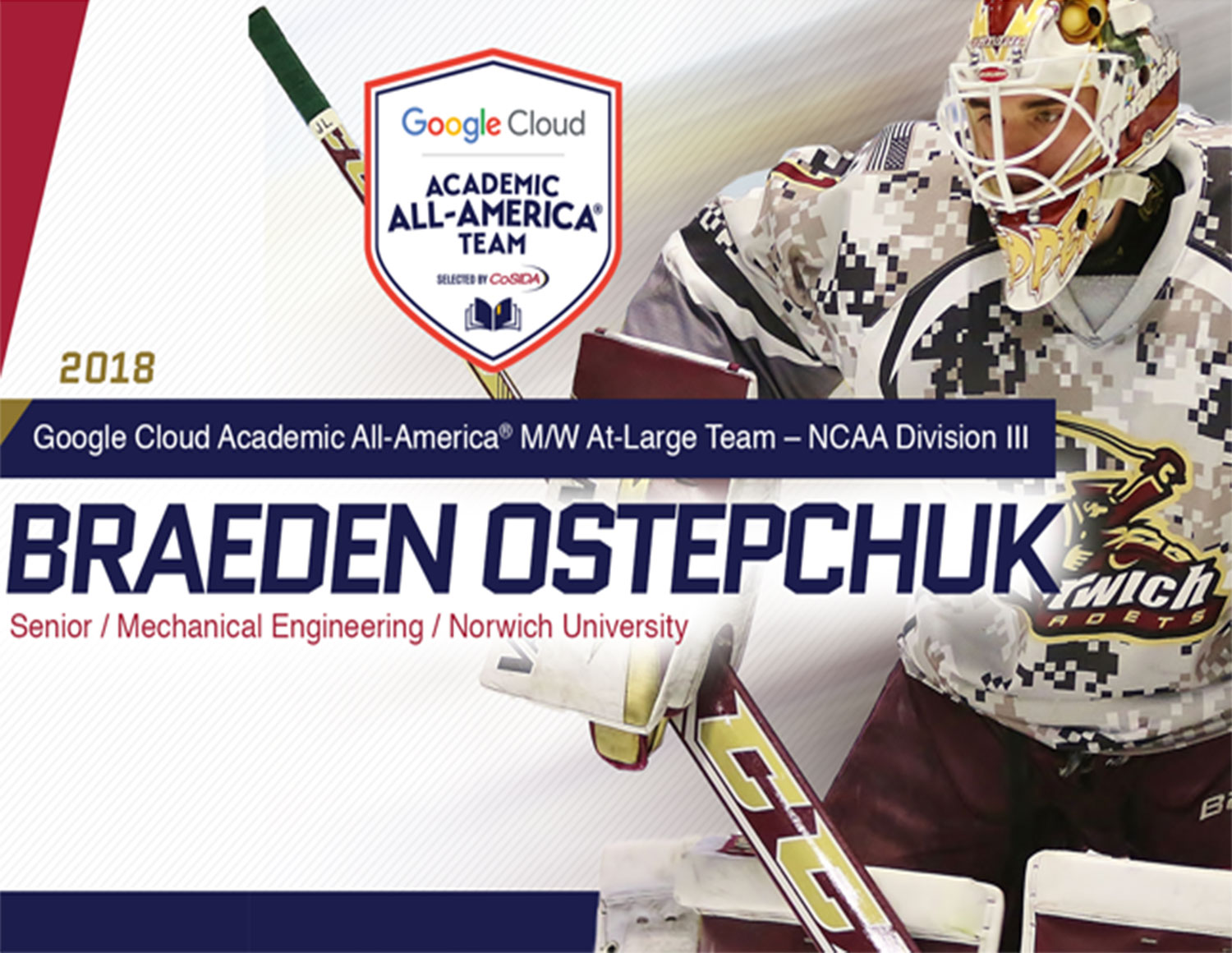 After being named to the third team in 2016 and first team in 2017, Ostepchuk capped off his incredible four-year career with the most prestigious combined academic/athletic honor a student-athlete can achieve by being named the 2018 CoSIDA Academic All-American of the Year for the at-large division, which encompasses 12 male sports.

"Being named the CoSIDA Academic All-American of the Year for the at-large category is an incredible honor and very humbling, although unexpected," Ostepchuk said. "There are many incredible student-athletes that represent a diverse set of backgrounds, interests, and universities across the country; I am very proud to have been considered."

Ostepchuk held a 4.0 cumulative GPA through all eight semesters at Norwich as a mechanical engineering major and was the Class of 2018 Valedictorian. He won the Freshmen Award for having the top GPA in the entire freshmen class last year. He is a four-time University scholar, three -time NEHC All-Academic team selection and also won the Freshman Engineer Award. He has also volunteered with Special Olympics events on campus and participated in the National Walk to School Day event with local community school children.

"Norwich has given me opportunities to explore paths in my future that I never believed to exist, and the connections I have made far exceeded expectations," Ostepchuk said. "The environment is both demanding and stimulating at the physical, mental and emotional levels, encouraging personal growth. In addition to the Norwich mantra, 'Expect Challenge. Achieve Distinction,' I also found that the Guiding Values of Norwich University were immediately instilled and have become more relevant than ever before. Beyond my technical knowledge stemming from an engineering degree and development as a competitive hockey player, Norwich taught me how to think and how to interact with people. These are the skills that I will take with me throughout my life."

Ostepchuk became the fifth NU men's ice hockey player in the last nine years to win the prestigious NCAA Elite 90 Award at the 2017 NCAA Men's Ice Hockey Championship for having the highest cumulative GPA out of all the student-athletes at the championship.

He also had a lead role in the Norwich University student team that won the third annual NASA Big Idea Challenge in March for their prototype that focused on an innovative flexible solar array design using inflatable booms to provide a compact stowed configuration and low launch mass for implantation on Mars.

On the ice, Ostepchuk had another historic season becoming the program all-time leader in career shutouts and moving all the way up to second on the all-time goalie win list with 51 career victories.

"I look at Braeden as one of the most complete human beings I've ever met between his maturity, intelligence, and athletic ability," said NU men's head ice hockey coach Mike McShane. "To be able to combine all of those things and become a tremendously successful person at that age is remarkable. "He was a great leader on and off the office at Norwich. The whole community, faculty, fans, fellow students had nothing but the highest respect for him."

In 2016-17 as a junior, Ostepchuk backstopped the Cadets to the program's fourth NCAA Division III National Championship. He led the nation with a perfect 16-0-0 record for a 1.000 winning percentage, becoming the first NU goaltender to accomplish that feat in program history.

"Braeden Ostepchuk is a terrific young man who was an outstanding student-athlete for Norwich University," said Norwich University Director of Athletics Tony Mariano. "A 4.00 student at Norwich and an NCAA championship goalie, he has demonstrated what it truly means to be a student–athlete. He has established great relationships with our faculty, staff and students on campus and with our community as a whole and is admired by all who he has touched during his time at Norwich. He is one of the finest young men I have ever been associated with and I am proud of his accomplishments and of the person he has become. He has worked very hard and richly deserves the CoSIDA Academic All-American award."

Ostepchuk will each be added to the pool of candidates for Division III CoSIDA Academic All-American of the Year award, which will be announced in early July.