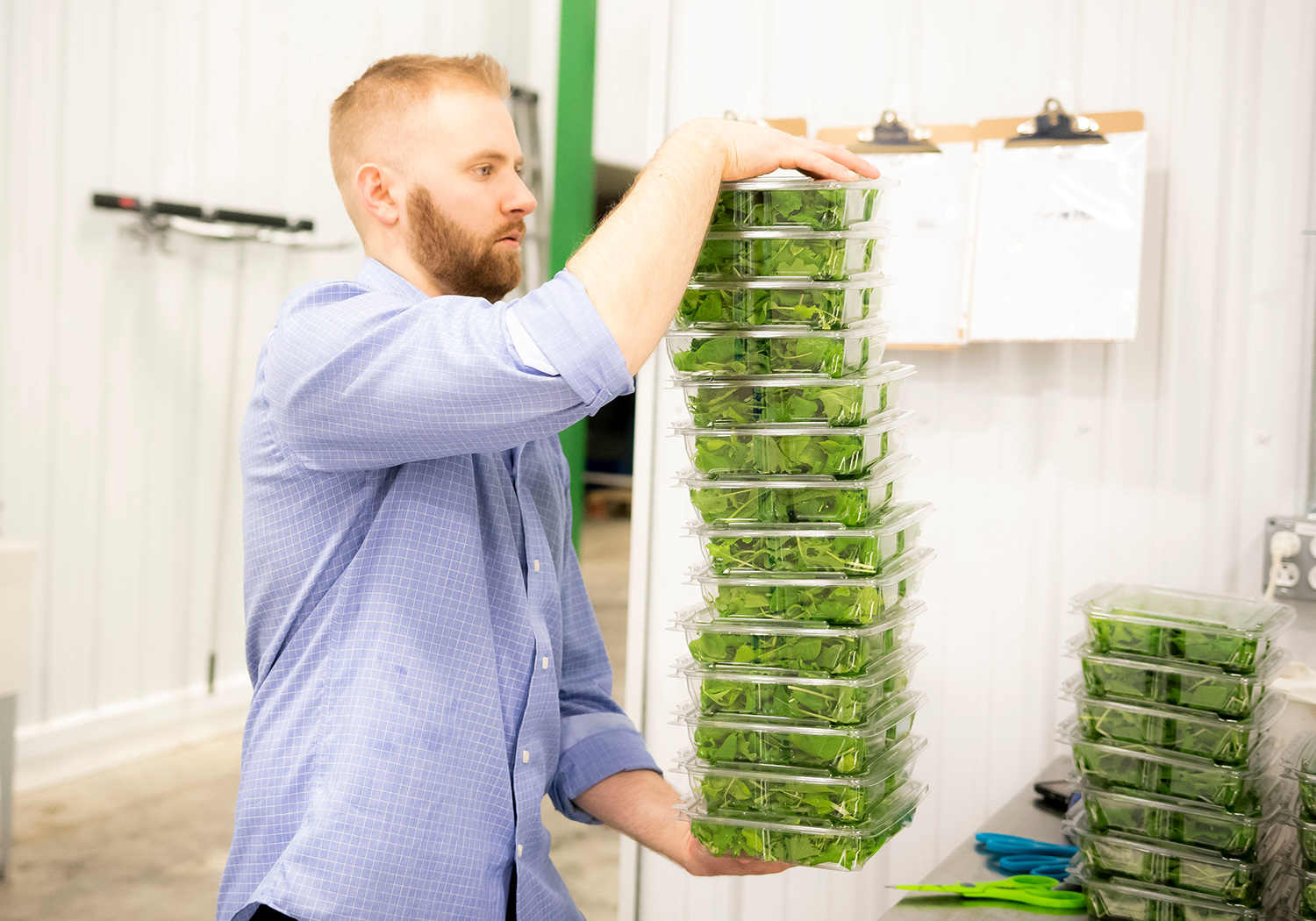 The millennial Army vet and Ceres Greens cofounder shares the spark behind his hydroponic vertical farm.

Jacob Isham wants to grow the salad of the future. Working with two partners, the 27-year-old is converting 12,500 square feet of a former granite works in Barre, Vt., into a densely packed, climate-controlled indoor vertical farm. By growing up, versus horizontally—think vine-like tubes of plants surrounding floor-to-ceiling LED light strips—the operation can produce 180 times more leafy greens and herbs per square foot than a standard field of greens, using a fraction of the labor and 85 percent less water, Isham says. His startup isn’t looking to compete with Vermont farmers. But farms in California and Arizona? Well, that’s another story. “The goal is to displace product that is traveling 3,000 miles across the country [and] is seven days old by the time you get it.”

Q: You have a new master’s degree in diplomacy from NU’s College of Graduate and Continuing Studies. How does that tie into what you’re doing now?

It might not affect how I do things, but it certainly developed the why of what I’m doing now. I worked in finance a little bit. Whenever you’re meeting with a client, you always talk about why you do something. Why you’re on some sort of mission or path that you’re on. The master’s program provided that for me.

I read a few books that tied environmental issues to national security and then worked back from that—agriculture. By 2050, we’re going to have nine to ten billion people on the planet. We’re losing arable land. We’re losing fresh water. How do you provide resources for more people with less space to do it in? In my master’s program, the questions were in that same vein. How do you prevent terrorism? How do you prevent conflict before it happens? Creating prosperity and opportunities for people before they succumb to extremism and radicalism was important to me. As it happens, I’m meeting with engineering faculty [at the David Crawford School of Engineering] later today to talk about designing a pop-up greenhouse that could be used overseas.

Q: You studied on Army ROTC scholarship and majored in political science as a Norwich undergrad. What was your plan back then?

I was looking to do 20 years in the military. I always focused on national security, politics, civil unrest, and different national security issues around the world. I branched infantry, went to Fort Benning. I went through Ranger School but had to drop out ten days before graduation.

A week to ten days in, I was showing symptoms of Crohn’s colitis, although I didn’t know that’s what it was. I’ve had about seven surgeries over the last three, four years and spent seven to eight months in the hospital. I was down to about 93 pounds. My lowest weight. Had a few pieces taken out of me. It’s been a long recovery process.

Q: What did you weigh going in?

I was 192. I remember because the night before, I weighed myself.

Q: What do you think farming offers veterans?

Independence, problem-solving, challenge, purpose. There’s a therapeutic bene t as well. There’s some science out there that talks about plants giving o certain chemicals that release endorphins in people’s brains, and it can help veterans with PTSD and certain issues. Farming, I think, is a perfect t for veterans. Especially given their military experience with physical fitness and purpose-driven missions. You’re providing for the planet. You’re no longer fighting wars, but you’re providing food to people, for people.

Capital and time. Being able to scale up is always an issue at the start.

Q: Your cofounders have experience in engineering and hydroponics. What do you bring to the equation?

A certification in hydroponics and controlled environment agriculture from Veterans to Farmers in Denver, Colorado. I’m also very much a process person. Operational ow is really big to me. Making sure that you have a plan for how you’re doing everything and then sticking to it. Making sure that you’re working as efficiently as possible. That’s always been my forte. I’m very good at that. I won’t be humble.