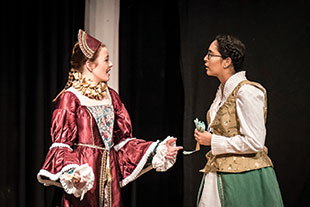 The Pegasus Players have taken their final bow on the stage of Dole Auditorium. In April, the venerated Norwich theater troupe mounted a production of Shakespeare’s As You Like It, their final show marking the last play to be performed on the Dole stage. In the following weeks, Dole was dismantled as part of the Webb-Dewey-Ainsworth renovation.

The decommissioning of Dole Auditorium and the December retirement of Professor Helen Caudill truly mark the end of an era. In 2016, Caudill handed her long-held post of Pegasus Players director over to Jeanne Beckwith, a playwright and Norwich English instructor, as well as the troupe’s long-serving technical director. Beckwith, as interim director, guided the Pegasus Players through their final generation on the Dole stage. But when one era ends, another begins. With a brand-new stage in the works, and under the guidance of incoming Professor Jeff Casey, the Pegasus Players will carry on, even in the temporary, one-year absence of a performance space. With necessity as the mother of invention, Shakespeare on the steps of Jackman, perhaps?