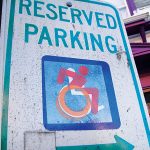 What does it mean to be disabled in the public space?

This is the question Norwich philosophy professor Brian Glenney, in collaboration with Boston-based colleague Sara Hendren, sought to answer in 2011. And amid the intersections of three seemingly unrelated disciplines—philosophy, street art, and architecture—they discovered the potential for redefining the future of accessibility.

“It is the philosopher’s job to question the built environment,” Glenney explains, “to ask, ‘Why was it designed this way?’ And it is the street artist’s job to ‘edit’ that environment in ways that challenge the status quo.”

A skateboarder and graffiti artist, Glenney is accustomed to viewing the urban landscape through the lens of accessibility—solving such problems as how to board-slide down a railing not meant for that purpose, for example, or reach the most visible building exterior for his artistic message. Thus, when he and Hendren began debating how the International Symbol for Access might better signal inclusivity, Glenney knew exactly what to do: launch a guerilla editing project of their own. Soon, using stickers that Brian designed, the duo began altering handicapped parking signs in and around Boston—transforming the static wheelchair symbol into an active body propelling itself forward.

“We wanted to reclaim an aspect of the built environment to provoke dialogue around individual agency,” Glenney says. And, although their work “was never intended as an activist campaign,” it ultimately inspired the Accessible Icon Project—a global movement among disability self-advocates and their allies to amplify their voices through the microphone of design activism. Today, you can hear their call for inclusivity echoing the world over—one sign at a time.

Glenney’s original symbol now complies with International Organization of Standardization ISO requirements and is available for legal use around the world. Among others, the states of Connecticut, New York, and Washington have officially adopted its use—as have the Jacksonville Jaguars, Cigna Health Care, and the country of Malta. It also resides in the Museum of Modern Art’s Permanent Collection.