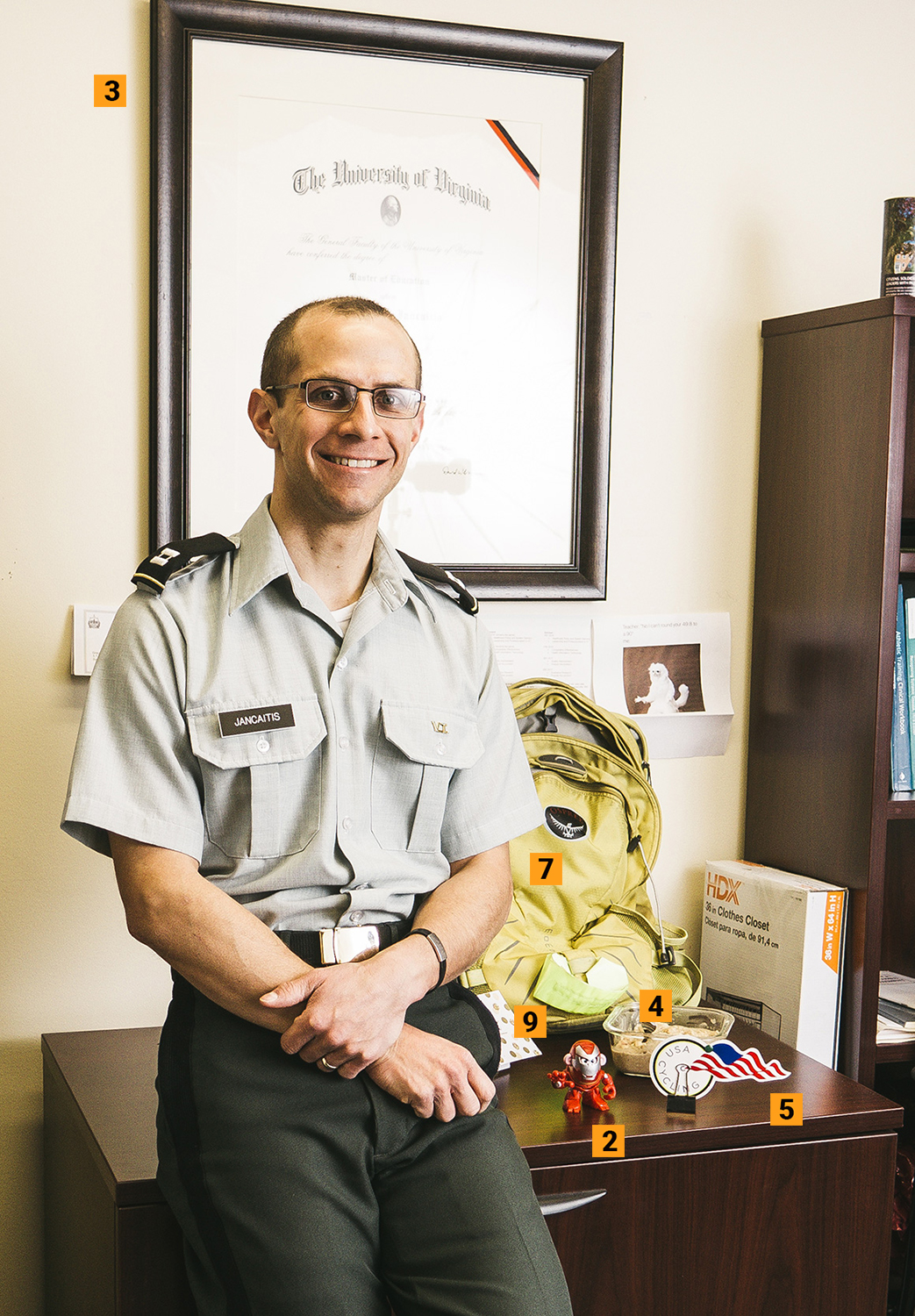 Professor Greg Jancaitis has grit bona fides to spare. A former competitive mountain bike racer, he entered his first 24-hour endurance race his junior year in college — and won. He continued to compete during graduate school, often winning and never failing to finish a race. Some of the appeal of ultraracing lies in the mental component, he says. “That determination, you know: I don’t care what’s going on, I’m not giving up.”

Jancaitis, who directs the athletic training education program at Norwich, brings similar dedication to the classroom, not to mention his scholarship. For his doctorate, he conducted a data analysis of injuries that occur at competitive cycling events. He shares the backstory on nine objects found in his office in Tompkins Hall.

1. Mr. Potato Head “Avengers” Collection: A gift from his wife, who told him his office needed “stuff for people to … nervously fiddle with.” The Avengers theme was a nod to department personalities at the time.

3. UVA diploma: Jancaitis earned his master’s degree from the University of Virginia and is in the final stages of completing his Doctor of Athletic Training.

4. Oatmeal: “Normally I get to enjoy it at home,” says Jancaitis, whose son recently turned one. “But when you’re packing up the toddler and shipping out the door late, you say, ‘OK, I’ll finish that at work.’”

5. USA Cycling sticker: A souvenir from a 2016 USA Cycling conference in Colorado Springs. It was there that Jancaitis learned the organization had eight years of data on the injuries occurring at USA Cycling sanctioned races. “I foolishly raised my hand and (said), well, if you need someone to look at the data, I’m the doctoral student that can do that for you.”

6. Dog River rock: Jancaitis completed his first Dog River Run in 2014. He says he decided not to be picky when grabbing the symbolic souvenir to carry to the finish. “In the end, I kind of got a cool-looking rock.”

7. Commuter pack: The three-season bike commuter pumps over the hills between his home in Barre and Northfield, Vermont, in about an hour. “The downhills are really fast.” Fatherhood and winter ice complicate his schedule.

8. Candy bowl: “It’s partly getting rid of my Halloween candy” but also a nice to have a welcoming treat to offer students.

9. Thank you cards: A collection of a half dozen thank you cards sent by former students expressing gratitude to Jancaitis ranging from his help with a class to inspiring a life-altering career choice. “Those are my reminders of why I’m really here.”