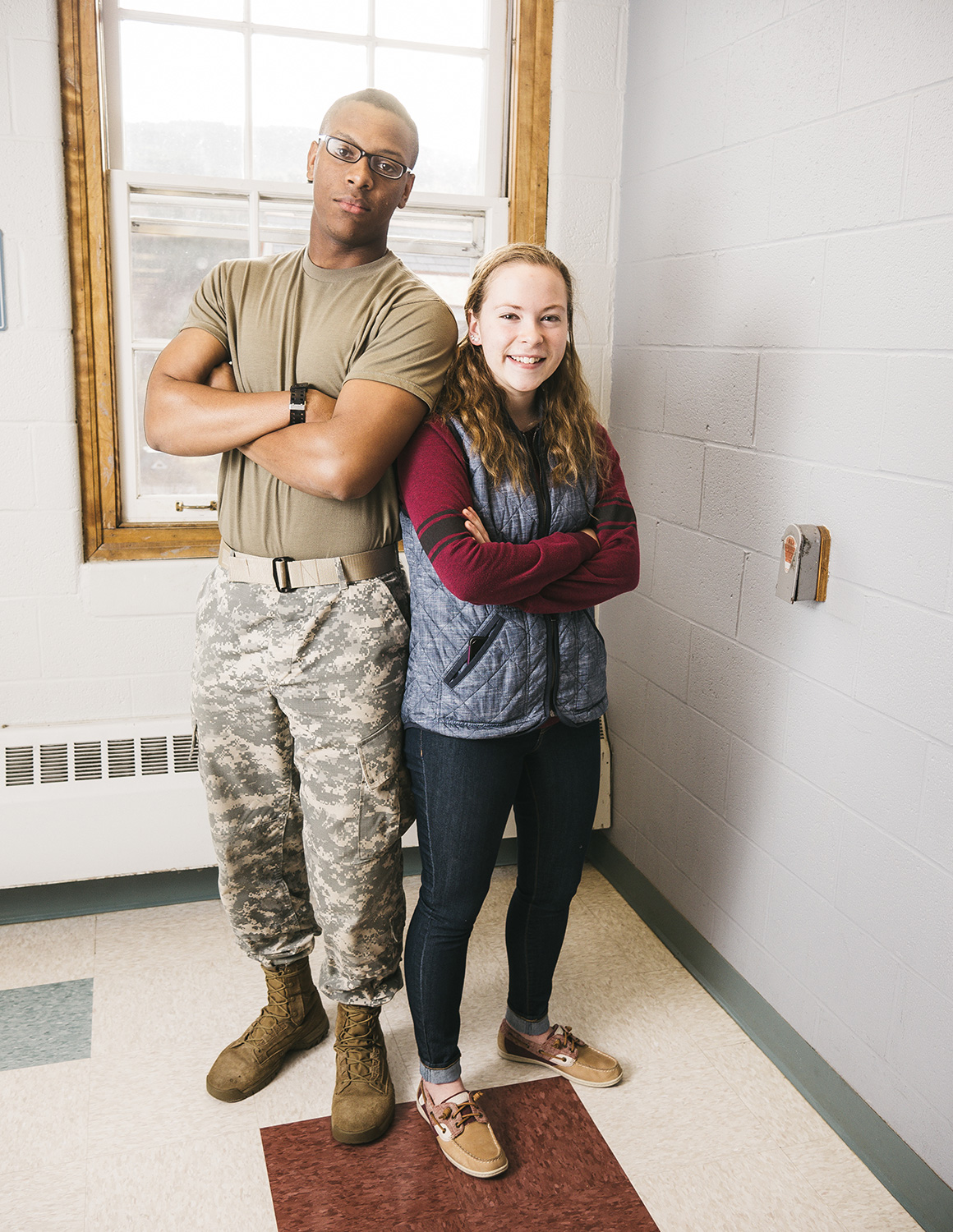 The Norwich criminal justice majors are friends from high school in Canaan, Vt., a community of 900 on the Vermont-Quebec border.

Josh: You’re in the Corps of Cadets. But you’re wearing a different uniform from other cadets today. Why?
I have a broken leg. I was playing basketball and ended up tearing a ligament, my MCL. That was four weeks ago. I have to keep a brace on for 12 weeks. (The brace doesn’t fit under my other uniform.)

You have a very serious expression. Does your knee hurt?
I’m doing 11 Bravo (in the Vermont National Guard). We do reconnaissance. I remember when I got to Basic, (we were told) “The number one job for an infantry man is to look badass.” That’s what we do. I rarely smile.

You were photographed during French class. What was happening?
Skylar: We were having a holiday party because it was getting close to finals. Josh: I was the DJ. We played French Christmas music. We made crepes. We had to (tell) Santa what we wanted in French.

What sparked your interested in French?
Skylar: Half my family lives in Canada. My mom was born in the United States and lived in Canada for (nearly) her whole life. So she’s a dual citizen. I was able to apply for that as well. My house is like three minutes from the (Quebec border).

You’re not wearing any socks.
I rarely wear socks. I’m used to the cold. This is pretty dressy for me. I usually wear athletic clothes. But I figured we had a French party, so I should dress up a little bit.

Do you play sports?
Yeah. In high school, I played four sports. Here (at Norwich), I’m running cross country with the hope of doing softball next year. I tore my ACL last year during basketball season. I was able to only complete in two (cross-country) meets because of my knee. Our team won GNACs.

It looks like you have each other’s back.
I grew up in the same town as Josh. It’s a really small area, very family and community oriented. It was nice as a freshman coming to (Norwich) knowing I had Josh and his twin brother here. I came here and had two really good friends.

Interview condensed and edited for length and clarity