The search for new heights 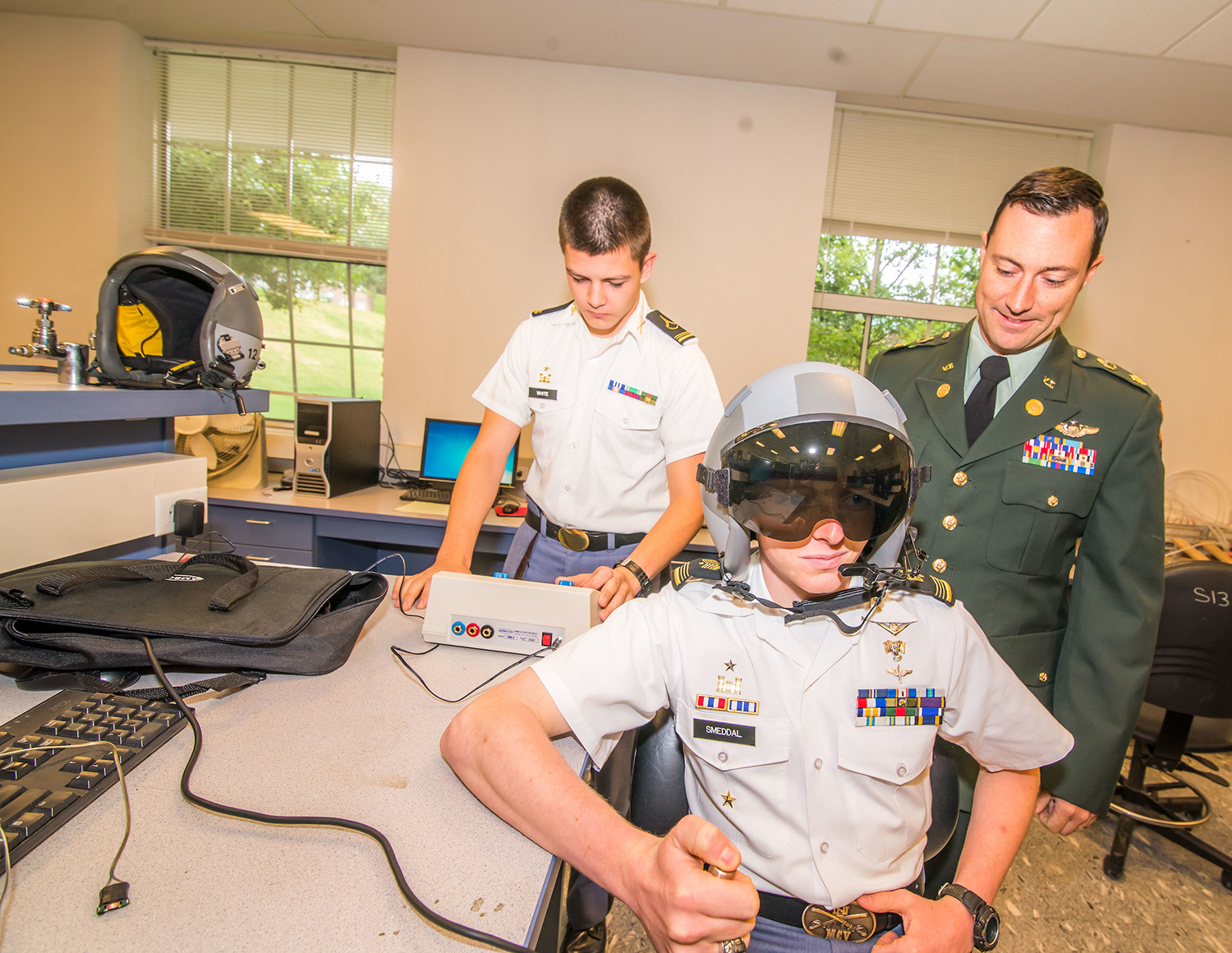 Instead, fueled by his insatiable curiosity, supreme intellect, and the singular drive of an Air Force Top Gun, he has rocketed to cutting-edge research’s forefront: investigating how to improve the safety and efficacy of pilots operating under high-performance flight conditions.

“Every square inch of a military aircraft is instrumented, with instant access to the data,” explains Brian Bradke, assistant professor of mechanical engineering. “Yet we have no way to objectively monitor its weakest link: the person flying the plane. We rely on pilots themselves to recognize the signs of potentially catastrophic conditions such as hypoxia — but by the time they do, it’s often too late.”

Leveraging the resonances between mechanical and biomedical engineering—his primary areas of expertise —Bradke ultimately hopes not only to monitor the real-time effects of acceleration and altitude on pilot physiology, but also to proactively counter them.

“Once a pilot is incapacitated, the outcome is always the same,” he says. “This research can preserve a multimillion-dollar asset. More importantly, it will save lives.”

The launching pad for Bradke’s inquiry rests at NASA —and the trajectory of his preparation spans more than a decade’s worth of experiences that have uniquely prepared him to conduct it.

During a summer internship following his first year of college — “I decided it would be better to be an engineer with a music hobby, than a musician with an engineering hobby,” he says with a laugh—Bradke examined the impacts of space flight on astronauts’ health, in part via remote instrumentation. There, at Kennedy Space Center, he realized two things: he was utterly fascinated by the role engineering could play in medicine. And, he wanted to fly in space.

Within four years, Bradke had earned a both a bachelor’s degree in biomedical engineering from Rensselaer Polytechnic Institute (RPI) and a master’s in mechanical engineering from Stanford University, with a specific focus on the effect of flight on body mechanics. Within seven years, he had commissioned into the U.S. Air Force, graduated at the top of his officer candidate class, and earned his pilot certification. And, by the time he completed his doctorate in biomedical engineering from RPI in 2014, he was a decorated combat pilot, having flown sorties in operations Iraqi Freedom and Enduring Freedom.

Although he narrowly missed qualifying for astronaut school (he finished in the top one-half of one percent of 18,000 candidates), Bradke’s landing at Norwich has been soft.

“Norwich is a perfect fit for me: I can pursue my scholarship in a military environment, and apply my knowledge toward solving problems I’m personally passionate about,” he says. “And I love being in the classroom.”

Already, Bradke has invented and prototyped a standalone hypoxia warning system for pilots and aircrew, and has developed a revolutionary new musculoskeletal countermeasures suit that may help astronauts maintain healthy bone and muscle mass while on extended missions.

The implications of this work, Bradke believes, will soon extend into commercial space travel. For this reason, he has proposed the Norwich University Airborne Research Center: an interdisciplinary development, test, and evaluation center focused on the discovery and implementation of new technologies to enhance the safety of civil and military air and space flight.

“The challenges we face, as humans seek to go ever higher and faster, are largely physiological in nature,” Bradke says. “My work blends theoretical, computational, and applied aerospace and biomedical technology to mitigate those challenges.”

If funded, the center would be the first of its kind in the country.