The Intersection of Science and Art 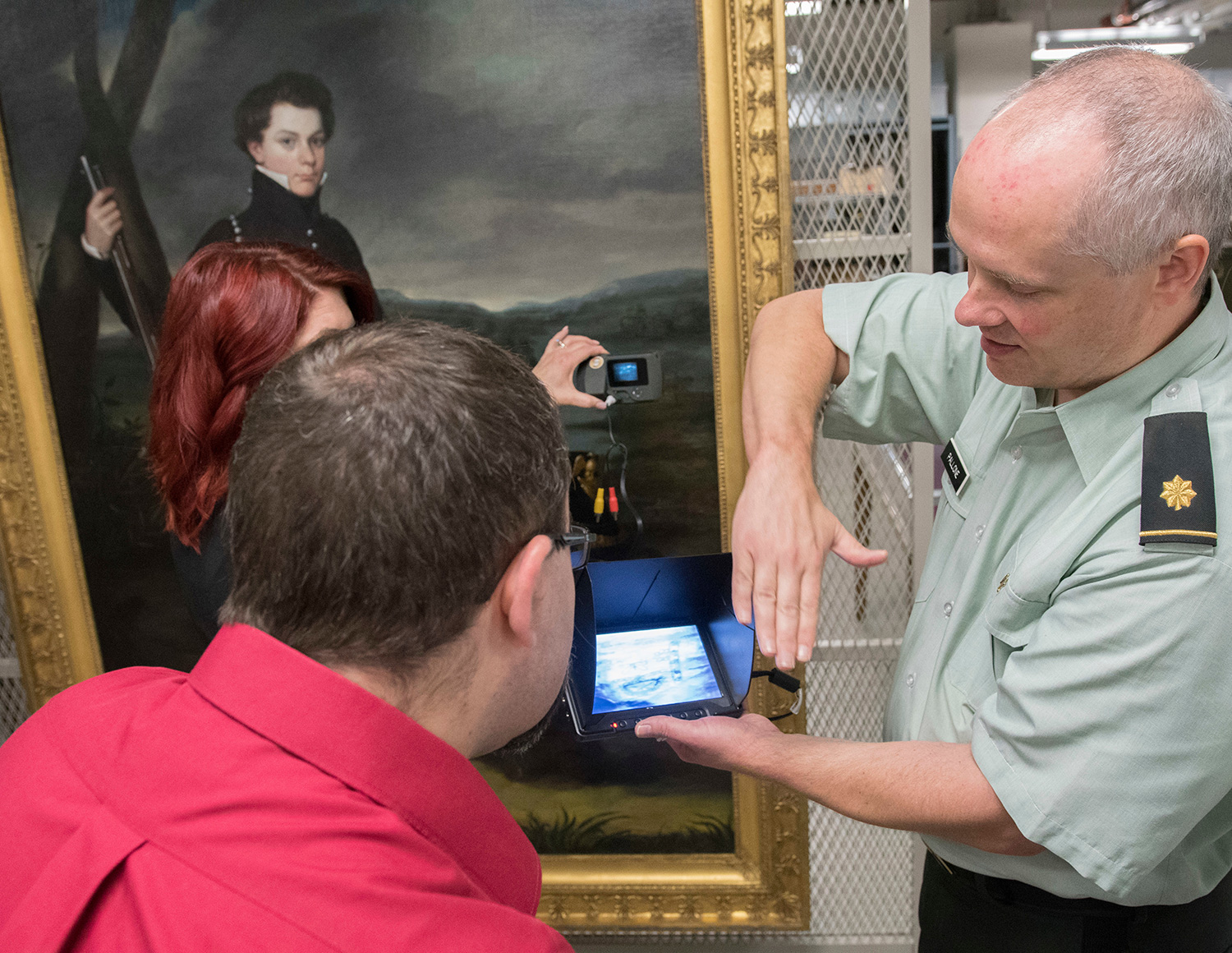 It was standing room only last Homecoming weekend in the Todd Multipurpose Room when the veil fell away from a life-size c. 1827 painting of a Norwich cadet. Now, the discovery of the painting’s story has grown into an interdisciplinary effort involving the Sullivan Museum and History Center and Norwich Physics Professor Art Pallone.

Sullivan Museum and History Center registrar John Hart discovered the painting when it was listed for sale by New York City’s Hirschl & Adler Galleries, where for decades it had been mislabeled as a portrait of a West Point cadet. Through painstaking research and documentation, the museum staff correctly identified the cadet as one from Captain Partridge’s Academy in Middletown, Conn. But the cadet’s identity eluded them.

There was something else: a shadowy figure in the lower right corner, known in the art world as a pentimento, the presence or emergence of earlier images that have been changed and painted over—in other words, a painting beneath the painting. While they could make out what appeared to be the figure of a small child, they couldn’t see details. What Hart needed was a camera that could reveal the detail without harming the artwork.

The answer lay just a few hundred paces away in Tompkins Hall with physics Professor Art Pallone, an expert in multi-spectral imaging.

In the basement of the Sullivan Museum, using a near-infrared camera, Pallone took pictures that peeled back another layer of the mystery. The boy appears to have a piece of fabric draped over his arm containing symbols consistent with a Masonic Apron. The museum staff had already traced the possible identity of the cadet to the Starr family. This discovery revealed another link to the theory, as Jehoshaphat Starr was the founder and inaugural Grand Master of the Middletown Masonic Lodge, which in 1825 sent a contingent to the cornerstone-laying ceremony for Partridge’s Academy in Middletown, Conn.

Among the many looming questions: Why was the child removed from the original painting?

For Pallone, who will continue to work with the museum to uncover the painting’s story, a foray into the world of fine art has been a rewarding one, not to mention a natural offshoot from physics. “Leonardo da Vinci understood what we, in modern times, sometimes need to rediscover,” he says. “Art is scientific, and science is artistic.”  – Jacque E. Day