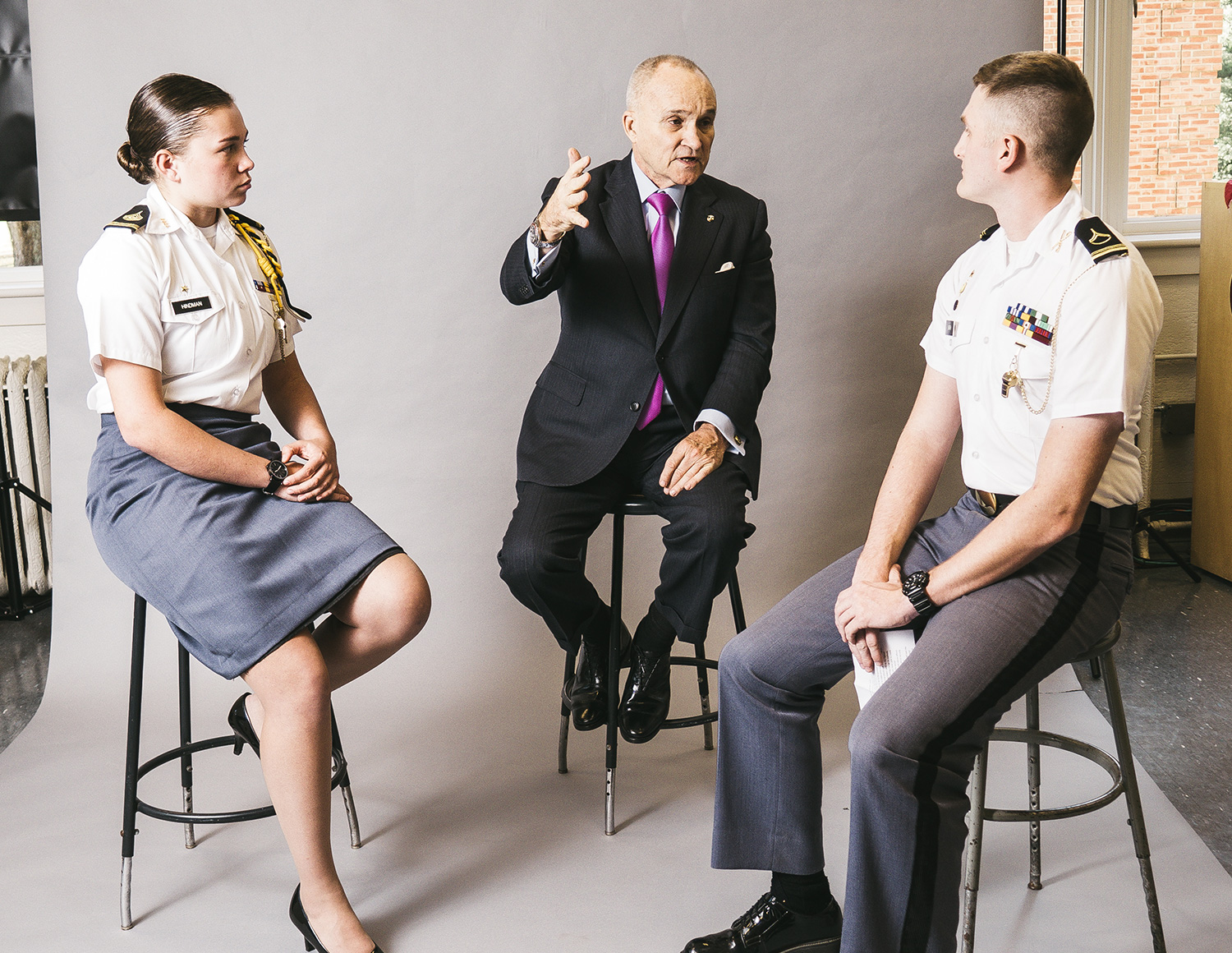 "Let's face it: The position of authority gives you the ability to affect change. Now the question is, is it lasting?"

Raymond Kelly led the New York City Police Department for 14 years under mayors David Dinkins and Michael Bloomberg, becoming the city’s longest-serving police commissioner while capping a 47-year NYPD career. Between appointments, Kelly oversaw policing in Haiti for the United Nations, worked for Interpol in Europe, and led the U.S. Customs Bureau. At the NYPD, he implemented many innovations, including the push to recruit police officers with roots in 106 countries to serve one of the most diverse cities in the world. The counter-terrorism bureau he established at the NYPD in 2002 was the first of its kind for a metropolitan police force.

The author of the 2015 book, Vigilance: My Life Serving America and Protecting Its Empire City, Kelly recently visited the Norwich campus to present a Todd Lecture. The former Marine and Vietnam War veteran sat down to talk about his life and career with criminal justice majors Jess R. Hindman '19 and John L. Smith '18. The Norwich cadets from Mansfield, Mass., and Houston, Tex., kicked off the conversation.

We'd like to ask you primarily about leadership, because that's why we’re in the Corps and why we chose Norwich. Throughout your career, what's been consistent in your leadership and management style?

Kelly: It's a good question. I had three older brothers in the Marine Corps. They used to bring home their “72” gear, or field equipment, including a guide book for Marines. I probably saw this when I was 13. It’s been around since 1910. But they keep issuing new editions of it. It talks about leadership traits. The general principle is, "Hey, if you act like a leader, if you sound like a leader, if you do the things that good leaders do, you're a leader." Leaders are made. They're not born. I sort of took that to heart.

There are 14 leadership principles in that book. I have a Franklin Planner that I use. In one of the dividers, I have these 14 leadership traits. Obviously, you could write paragraphs, books, about each one of those things. But some of them are justice and judgment. How do you treat people who are working for you? What you ultimately want is respect from the people you work with. How do you get that respect? One of the ways you get it is by using these traits. There's dependability, obviously integrity, decisiveness. There's tact. There's initiative, enthusiasm, bearing, unselfishness, courage, job knowledge, loyalty, and endurance. Now, if you look at all of those, and you try and emulate them as best you can, people are going to see you as a leader. Someone who they respect. That's what I try to do. There's certainly lots of challenges, in life, challenges as a leader. But it's sort of worked for me. I know there's a lot of different definitions of leadership. But I wanted to keep it simple in my head.

That is a little bit of my leadership secret. Also, I’m a hands-on leader. I’m not a micro-manager. But I am hands on. I want to do things that enable me to see what personnel are doing, let them know that I appreciate what they do. Also, you never want to become one of the boys or girls. A lot of people don’t realize that. There’s a price to pay for leadership. The expression, “It’s lonely at the top.” Yeah. It is—at every level. Again, you want that respect. If you are just one of the crowd and become sort of one of your subordinates, they’re not going to respect you. These are some of the things that I think work for me.

Taking counter-terrorism work as an example, you were able to effect great amounts of change in the NYPD. What would you say has been your most effective method for enacting that change and getting people to do what you want?

Well, let's face it: The position of authority gives you the ability to affect change. Now the question is, is it lasting? Will people resist it? Will it somehow be undermined? Just having a position of authority enables you to initiate things. I think the respect element I talked about is what enables it to sort of take hold. You know, "This person is leading this effort. Because it's this person, I think it has merit. I am buying into it."

What are some ways that you've changed your leadership style over the years?

I think leadership to a certain degree is situational. It depends on what the work force looks like and what the immediate situation is. I think you need to be flexible in terms of how you approach it. If I have to use one word as to how I lead, I would probably say “authoritative.” I have that model because in an organization like the police department, you've got people working 24 hours a day. The department needs the structure, the people need that structure. I think in many things you have to have that authoritative style. But then there's the coach, and then there's the element of counseling people. So, depending on the situation you've got to be able to adjust to what you believe is the right leadership style. In an emergency situation, you have to use the authority that you have. People expect that. People want somebody in charge. You have to take that position. But you don't have to go around flexing that all the time.

How have you dealt with people that didn't like you or the decisions you've made and been able to move on?

You do just that—move on. I would say this, I did learn a lesson. I made a decision, and quite frankly I don't remember what it was, but it had to do with constituencies. You have to think about the [ones] you have when making a decision. I made this decision that did not incorporate the union or the union position. You work with the public, the media, elected officials, the boss, the mayor, that sort of thing. I just didn't think about the union. It came back to cause a problem.